Brought home a new STI Duty One 4.0 9mm this afternoon and after a complete tear down and cleaning, I took it out for a test drive. 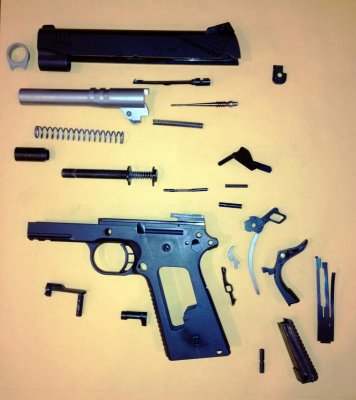 I’ve read all the stuff about STI’s that I could get my hands on and went to the range fully intending on putting it to the test immediately. I stuffed a couple of mags full of steel and a couple more full of the cheapest (that’s almost a misnomer in today’s market) stuff in the ammo stash. 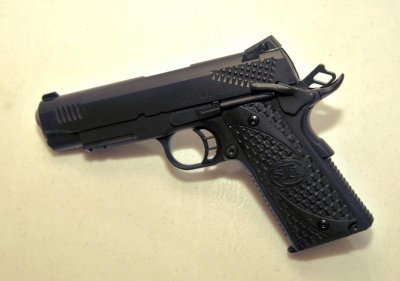 36 rounds and not even a hint or a problem. So, I loaded four more mags….and intentionally tried to limp wrist it….still couldn’t make it fail.

300 rounds later, I finally gave up. I tried double taps and eventually just fired a couples of mags as fast as I could pull the trigger.

Now, I should probably confess that I’m a loooong time 1911 fan. But, I’ve never shot Mr. Browning’s pride and joy in anything other than .45 ACP. I’ve owned or carried lots of different makes and models including a Remington Rand that was issued to me in the Navy Seabees, a couple of Gold Cups, Govt. models from various makers and a couple of the ‘oh wow’ custom brand names.

The 9mm commander size from STI was unbelievable. I expect less recoil and muzzle flip, but I was not ready for the difference I experienced.

At the end of the day, I can only say that every single expectation I had going in to the STI was exceeded. It’s truly an amazing pistol. Quality craftsmanship in every detail.

If you’re on the fence about an STI, don’t sit there til you get splinters in your butt. Just go for it….you’re only problem will be deciding just which one to get.

And, for the record, it shot some really nice groups....I'm sure it's way more accurate than my old eyes and wobbly hands.
P

Congrats! A range mate let me have a go with his STI Guardian last visit and it was fantastic.

Sent from my ME172V using Tapatalk

Those of us who have STIs keep telling those who don't that they are great pistols. Every so often, someone else breaks down and buys one and says, "Oh, THAT'S what they were talkin' about!!!"

was looking at a Duty One 3.0 in .40 cal for carry.....but now that STI has come out with a "lite".....(dang, there's always something more interesting coming down the pipe)

So you have found and exposed the flaw in STI pistols, they won't let you get in any malfunction practice.
Last edited: Feb 28, 2014
B

I have 2 STI's and love them. Like butter.
D

Whisky said:
.
....
enjoy your new STI and realize that it was made here in Tejas by a company with possibly the best CS in the gun world (in the unlikely event that anything should "go wrong" with your pistol)

I have toured the facility and seen the video. The pride of workmanship was evident everywhere you looked.