Any information and/or value estimate on these Du Biel Arms rifles?

What I can gather from wiki et al-

The Dubiel name and guns seem to have begun with the work of master gunsmith John Dubiel in the Hoffman Arms shop in Ardmore, OK, sometime in the 1920's. I believe that some guns were produced during that time, either with the DuBiel name on them, or at very least with John's parts in them. John's son Joe Dubiel may have been brought up in this environment, but seems to have started his own company, actually called The DuBiel Arms Company in the 1970's in Sherman, TX, and produced many fine custom rifles and patented components there until sometime in the late 1980's.

I am researching this for a friend, who has inherited a couple DuBiel rifles, so I need to learn more about DuBiel in general, and about these two rifles in specific.

Both rifles appear to be from the 70s-80s Dubiel Arms Company as both barrels bear that stamp and as they have the Thumbhole, Modern Classic style stock, as well as the apparently patented jeweled and chromed bolt bodies. One of them has a bronze colored barrel and receiver and is chambered in 6.5-270, while the other has a gray/pewter colored barrel/receiver and is chambered in 375H&H Mag.

My questions are these:

Where can I get more information about Dubiel Arms and the specific features and quality aspects that they seem to have?

Where can I get more information about whether the serial number scheme tells anything about the date of manufacture and perhaps about the specific model or features possessed by each particular rifle?

Who can I reach out to, to get a fair valuation of these rifles on the current market?

Thanks in advance for any advice. 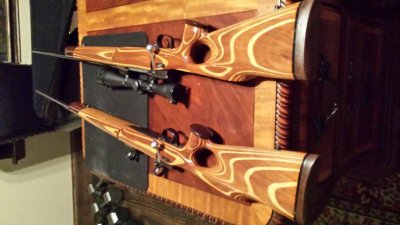 I am sure you saw this on Wikipedia: "The largest collection of DuBiel rifles today is in the collection of the Cody Firearms Museum of the Buffalo Bill Historical Center in Cody, Wyoming."

I'd try giving them a call. I'd probably also try calling a custom rifle maker, such as Hill Country Rifles, and ask them if they have anyone on staff that might have some knowledge.
E

I realize this post / question is a bit dated, but would be happy to discuss Dubiel further. I grew up hunting with Joe Dubiel and my father has two guns made by Joe - a 7mm Rem Mag in African walnut / thumbhole and a Ranger Action in .257 (Joe had worked there at one point, prior to starting Ranger) with a stock made by Joe. The guns are wonderful and we are always happy to discuss them. Also always looking to add to our collection should your friend have an interest in selling his pair. The guidance you have gotten in this forum is good with respect to both Tyson and the donation to the gun museum, as well as Wikipedia. Happy to further discuss. Congratulations to your friend - great guns indeed.
You must log in or register to reply here.
Share:
Facebook Twitter Reddit Pinterest Tumblr WhatsApp Email Share Link