The APX is Beretta's newest duty pistol offering. While Berettas past offerings have had often featured some unique operating system, the APX uses a standard Browning style tilting barrel system. 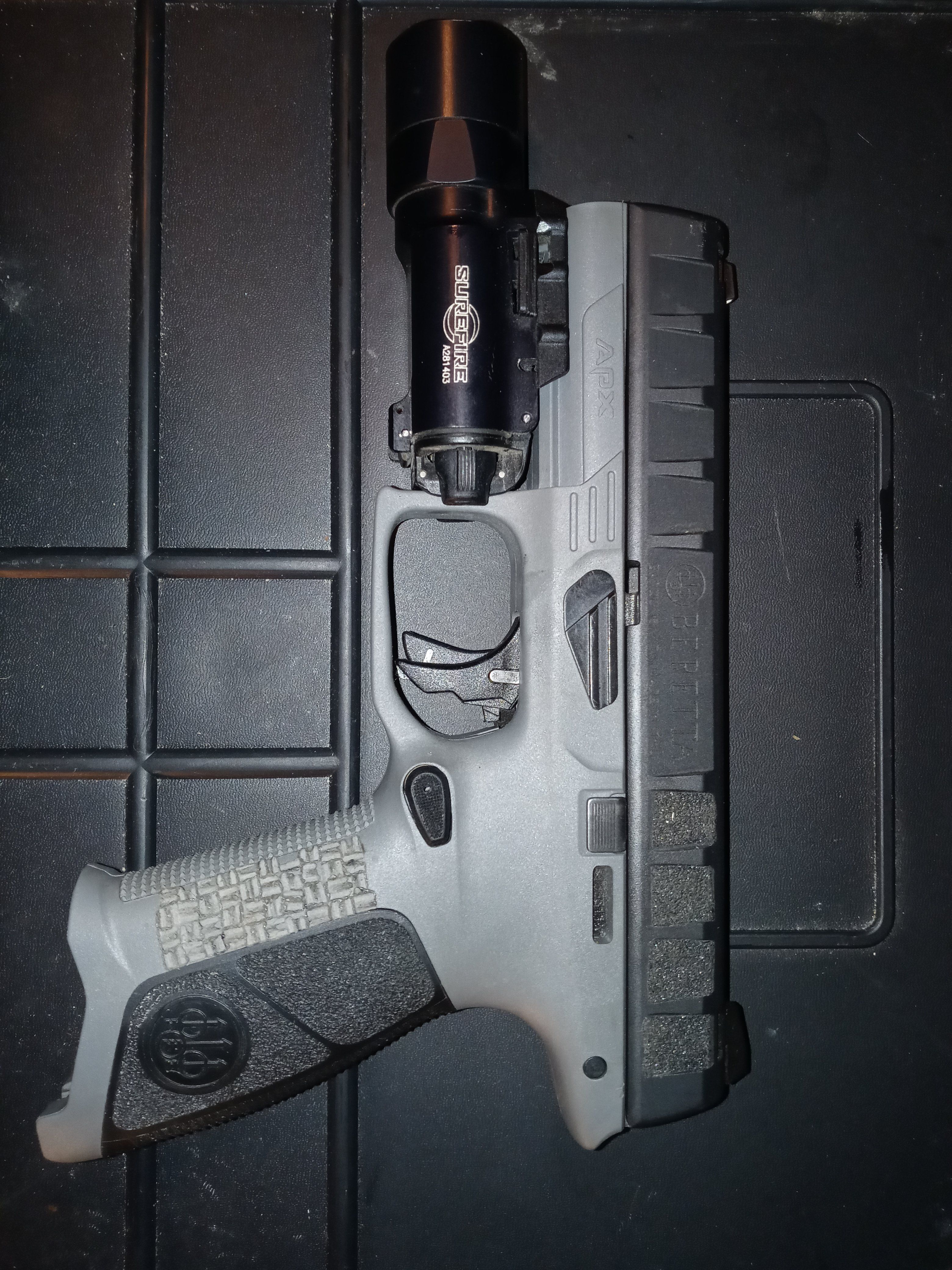 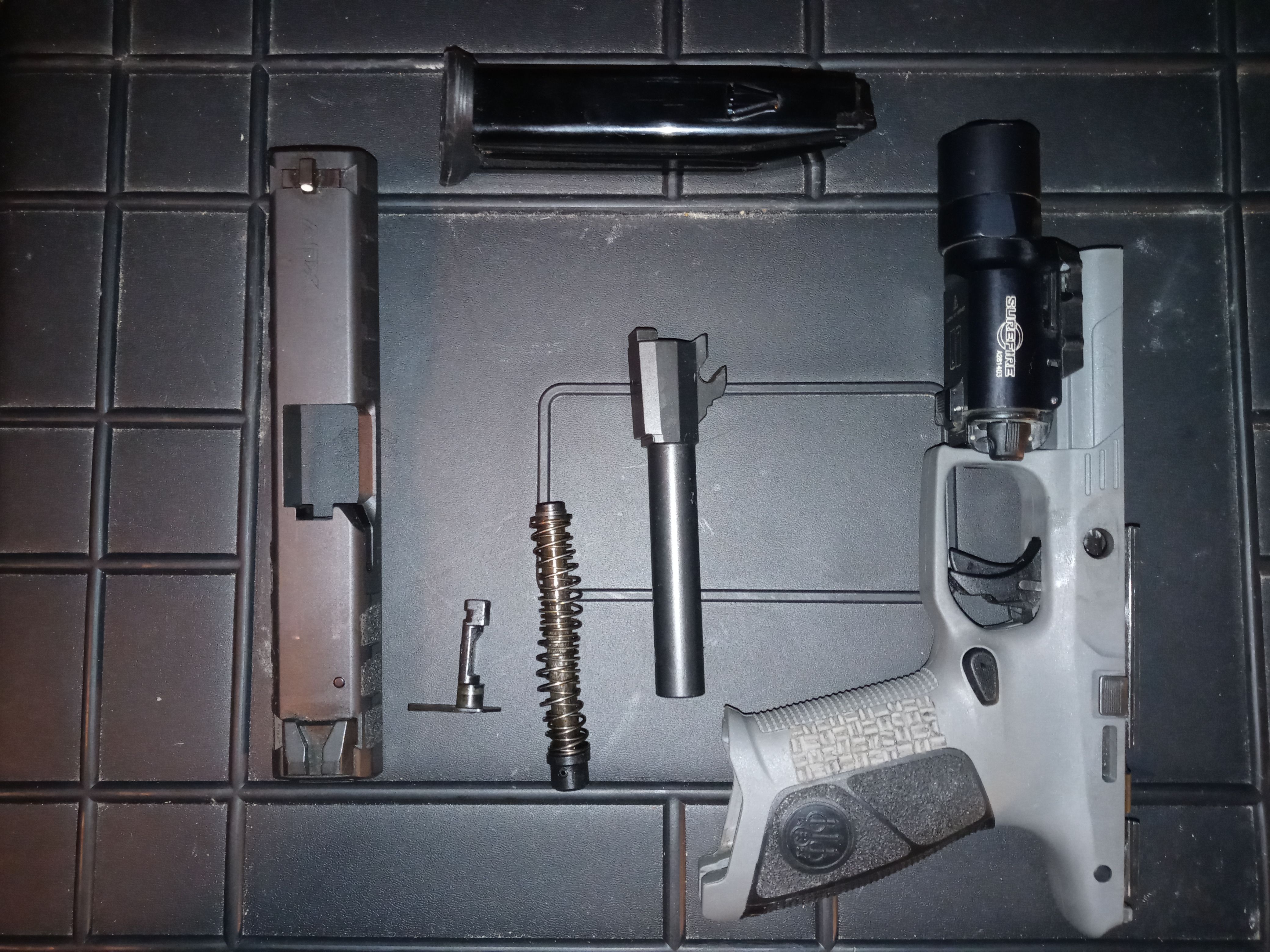 Field stripped. Similar to most others, but you have to push the other side of the dissassembly lever while rotating it down. This part isn't really held in by anything, so don't loose it. There is a striker release button that allows you to remove the slide without pulling the trigger. Here's how it works

With the slide locked back, and assembly lever down, you use any suitably pointy object (pen, rifle cartridge, punch), drop the slide SLOWLY while pressing in the button. Chances are you will have to slightly press the dissassembly lever down a bit, and the slide will come off. Or you can not be a psychopath, and just clear the gun and pull the trigger. This "feature" is so useless, yet constantly gets in the way when swapping frames. I hate it. At the very least, this convoluted process means it will never "decock" the gun on accident. 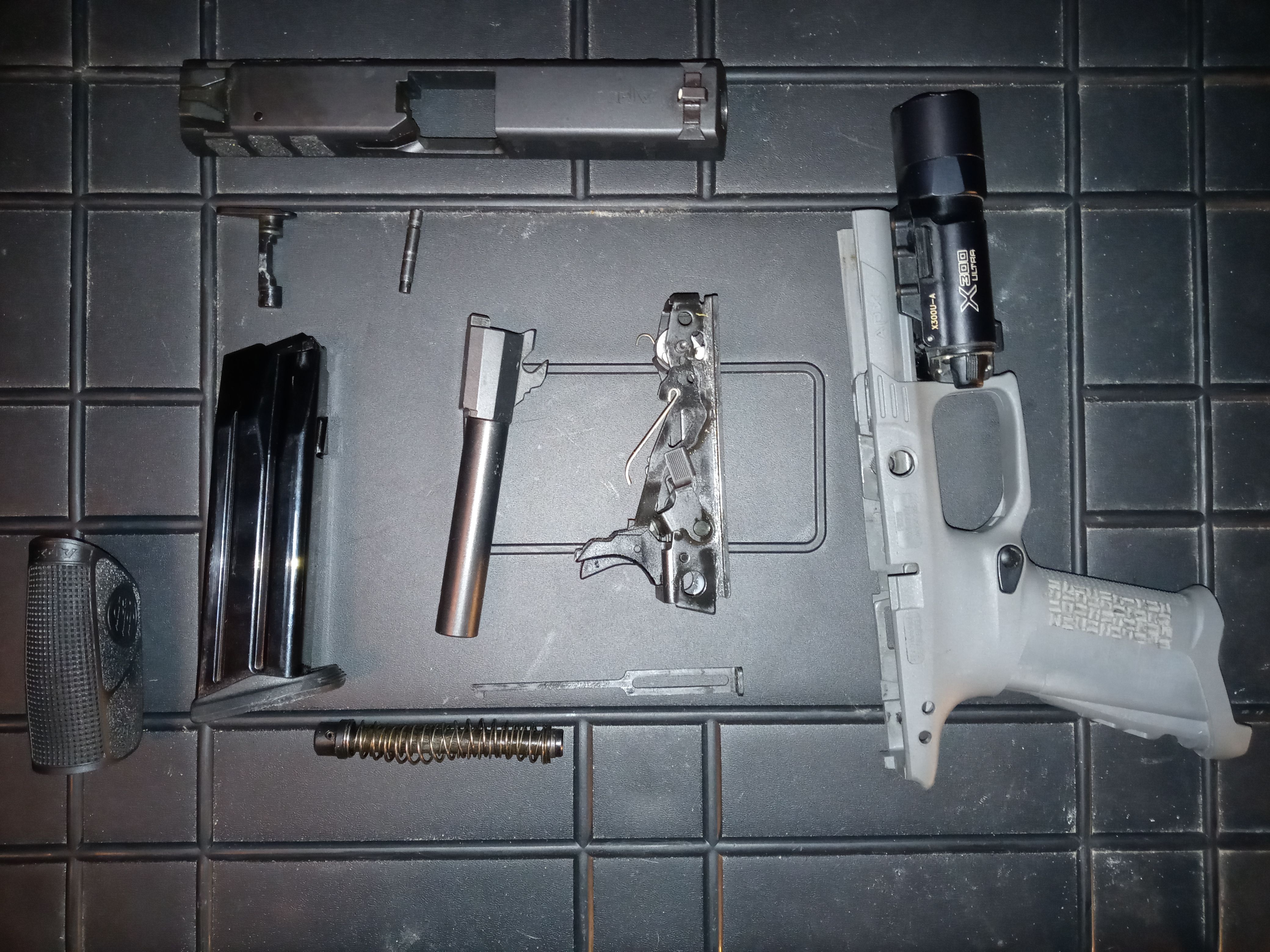 Like other contemporary designs, the Beretta features a modular frame. Unfortunately it seems like the market has more or less rejected the APX. The only frames available are Beretta offerings. You get to choose color, size, and finger grooves/no finger grooves. In addition, all frames have 3 different choices in backstrap size, so you do get some flexibility, though it is not near the level of Sig's P320. Likewise, removing the FCG isn't quite as simple as the 320, but it's by no means complicated, just an extra pin and accompanying spring, and button.

I do like you actually get backstraps, vs what Sig does. I will also add the polymer seems to be nicer quality on the APX. It doesn't scratch as easily, and simply feels nicer. I do think the APX's grip texturing is just a hair nicer than Sig's, though I still would like a bit more.

The FCG on the APX is rather simple. Far more simple than the 320. This comes at a cost, the 320 has a nicer trigger, but the APX is not terrible, a bit of takeup, a tiny bit of grit, and about 5lbs later you get the break, which is a bit spongy. For a factory striker gun it's a good trigger. Reset is good, tactile and audible, very very little overtravel. 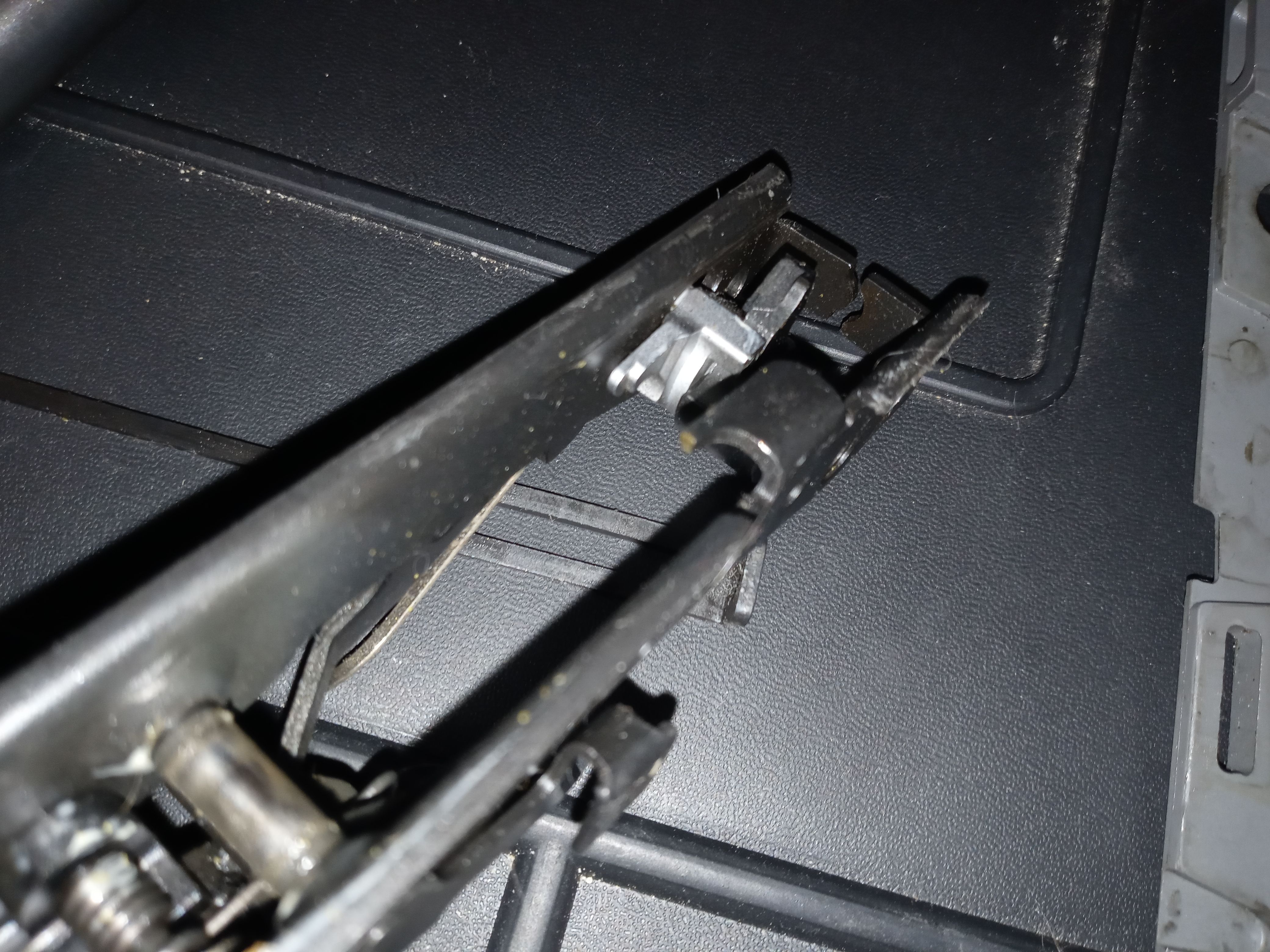 The trigger shoe itself is quite nice, the face is wide and flat, the bow has an initial curve but then straightens out. You do have an inertial drop safety tab that tucks in nicely out of the way. 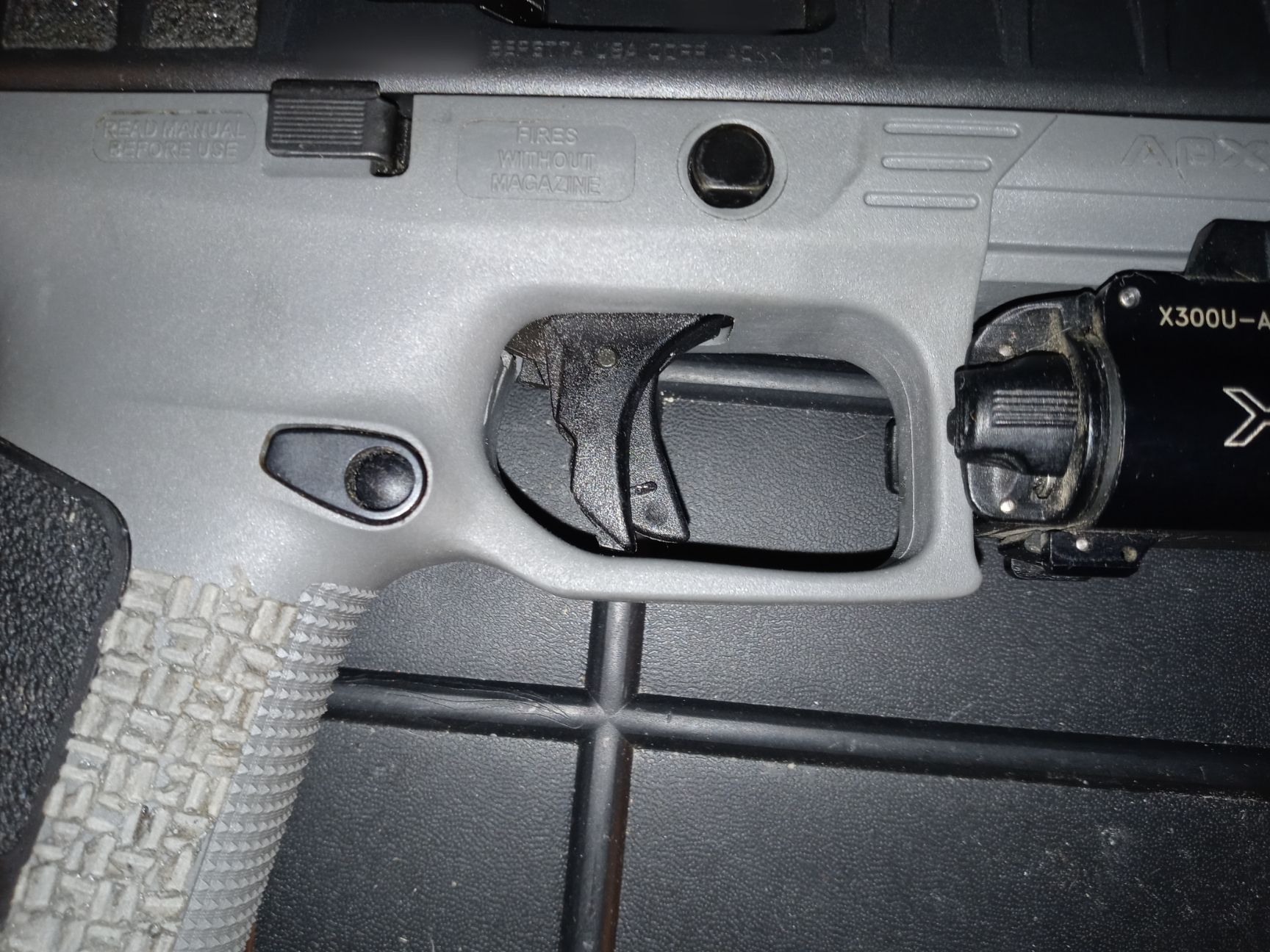 Accuracy at 7 yards. Not bad. I've definitely lost my touch with striker triggers. I have no doubt if I still shot glocks the group would be half that size. 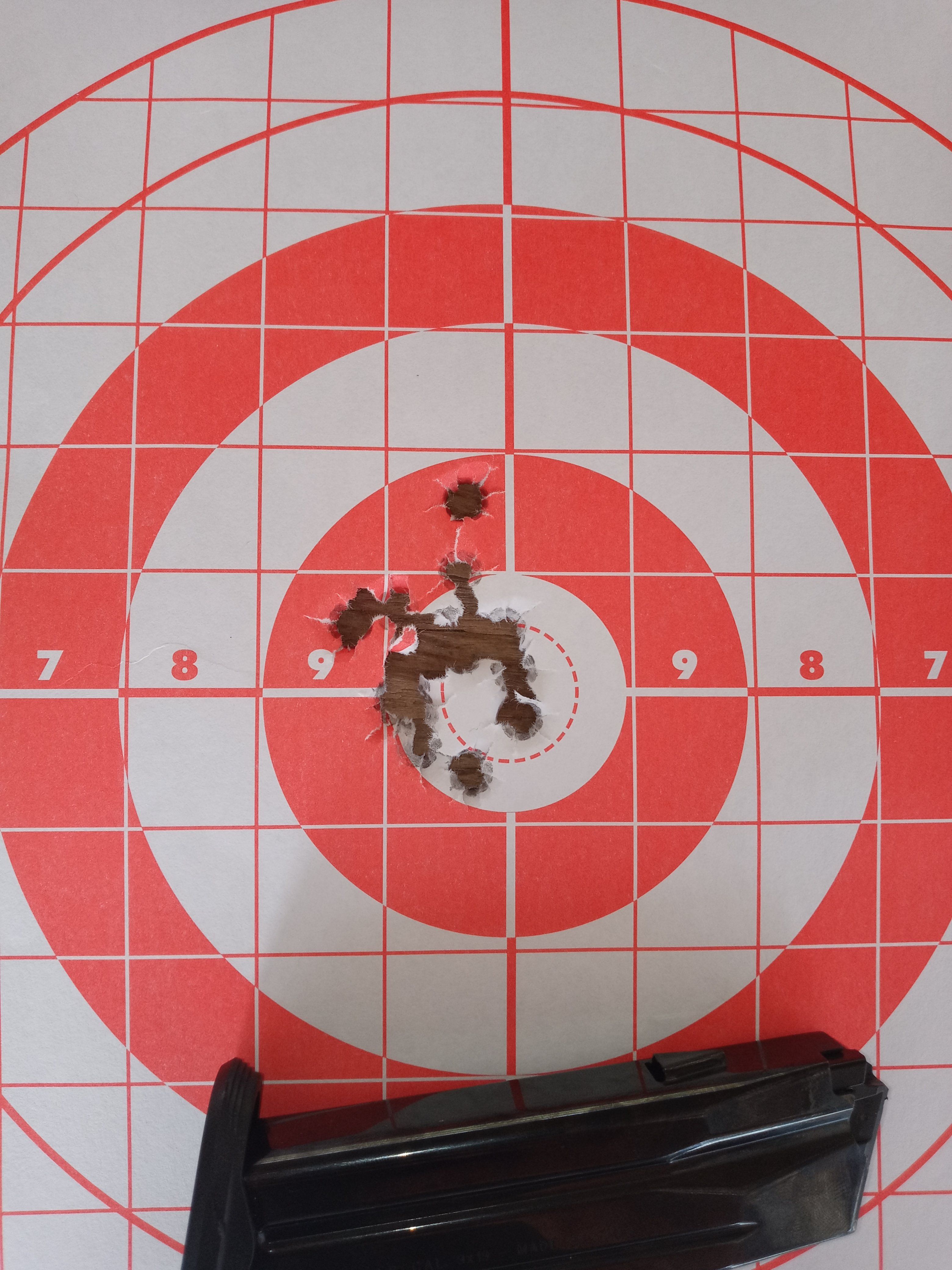 The trigger can be improved (slightly) by installing a lighter striker spring from Beretta. It drops the pull weight by about a lb, which I have done.

Sights are metal 3 dot. They work ok. The front sight's dot is supposed to appear larger than the rear dot, but it's difficult to tell with the gun pushed out all the way. Rear sight has a nice ledge to be able to run the slide on your belt, a table, whatever. I would like some tritium sights, but good luck finding any. 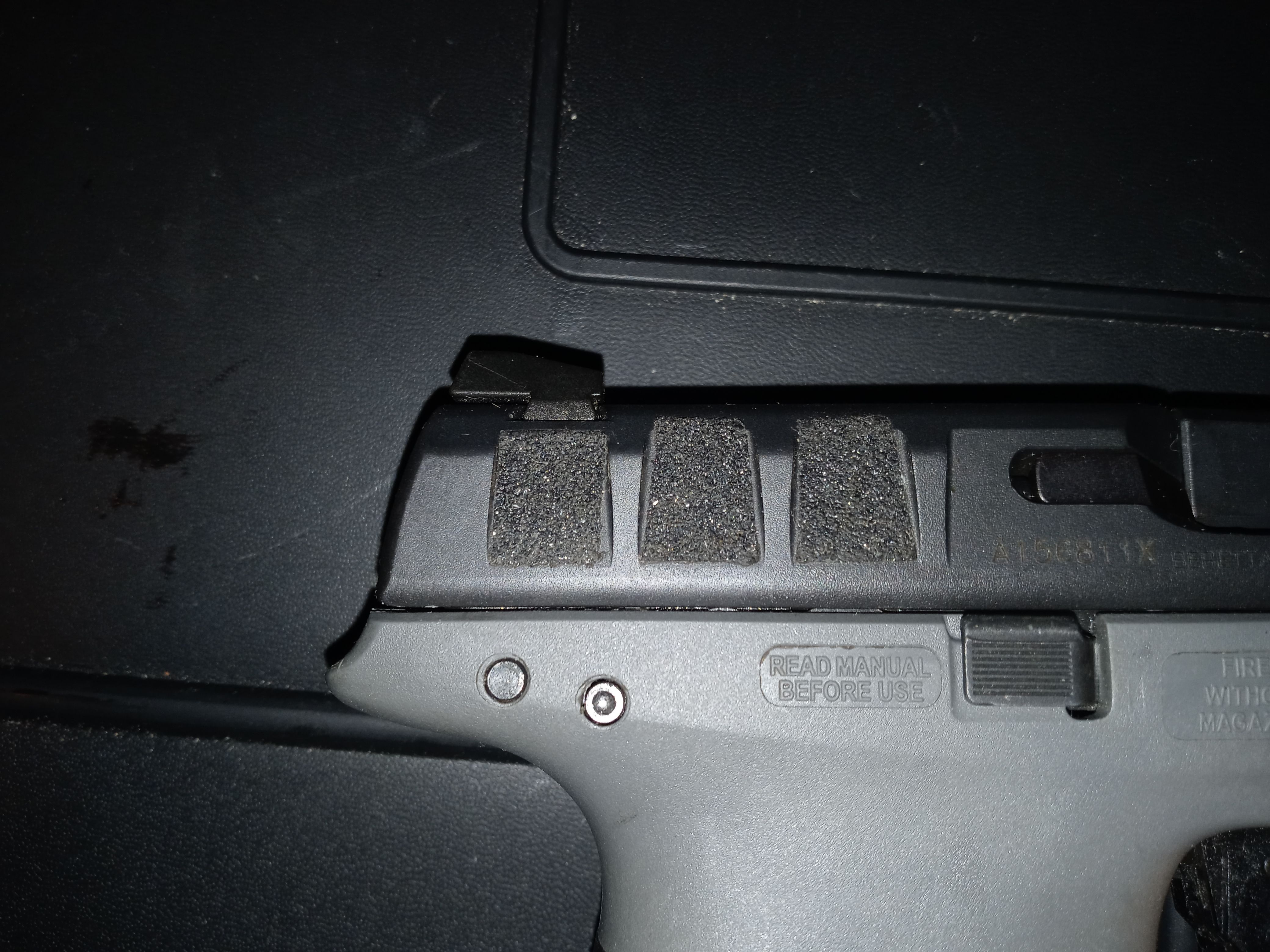 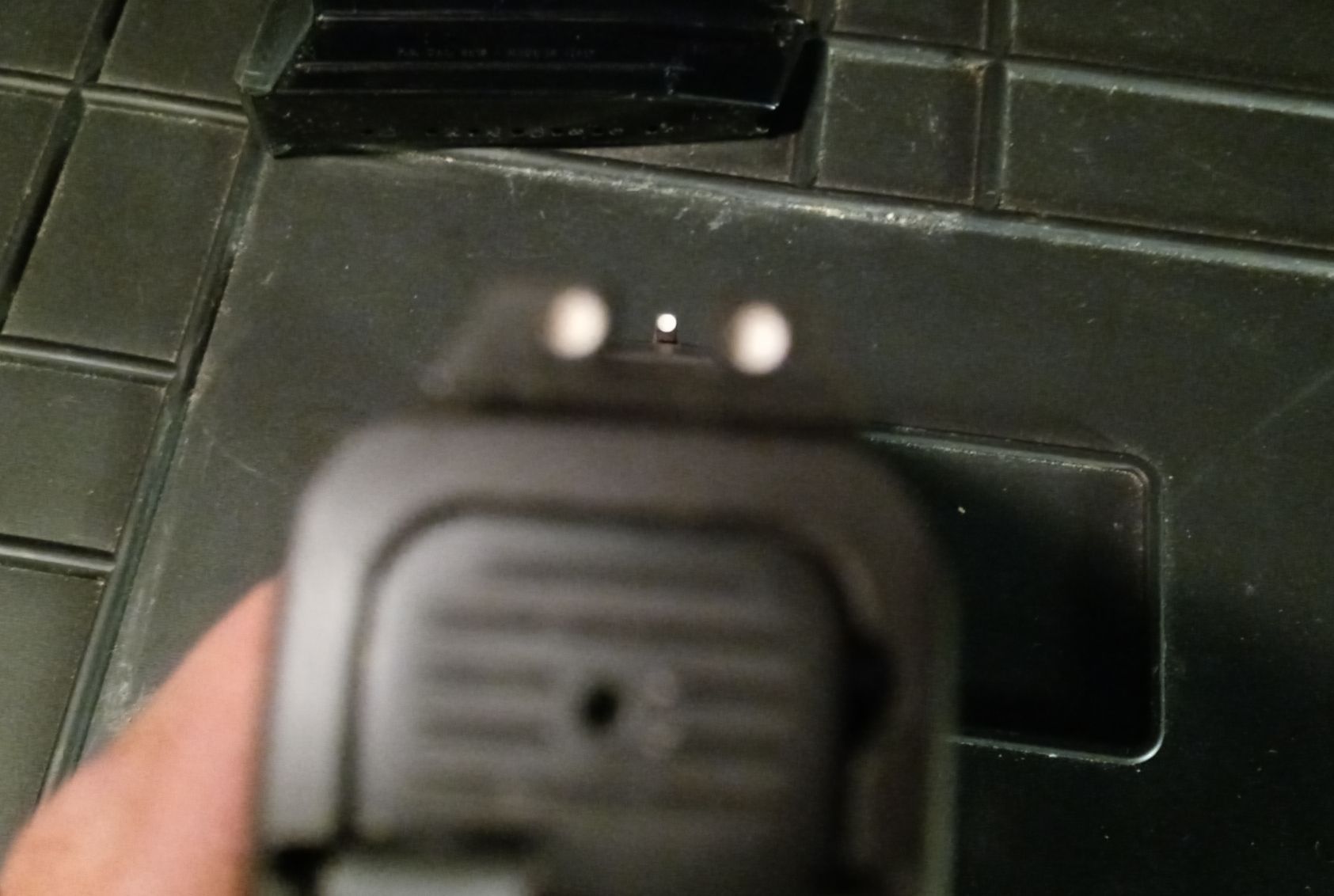 Ergonomics. Not great. My previous large amount of experience with a striker gun is from Glock, and while people will bemoan Glock's grip, it does an excellent job of promoting excellent recoil control. In addition, the Beretta has a massive slide, like .45acp massive. The swoopy grip, massive slide means the Beretta has a pronounced "flip" when firing. Stippling, heavy guide rod, and weapon light helps tame the flip somewhat. I found that the other backstraps don't really help, and made it harder to actuate the slide stop. More on that later. 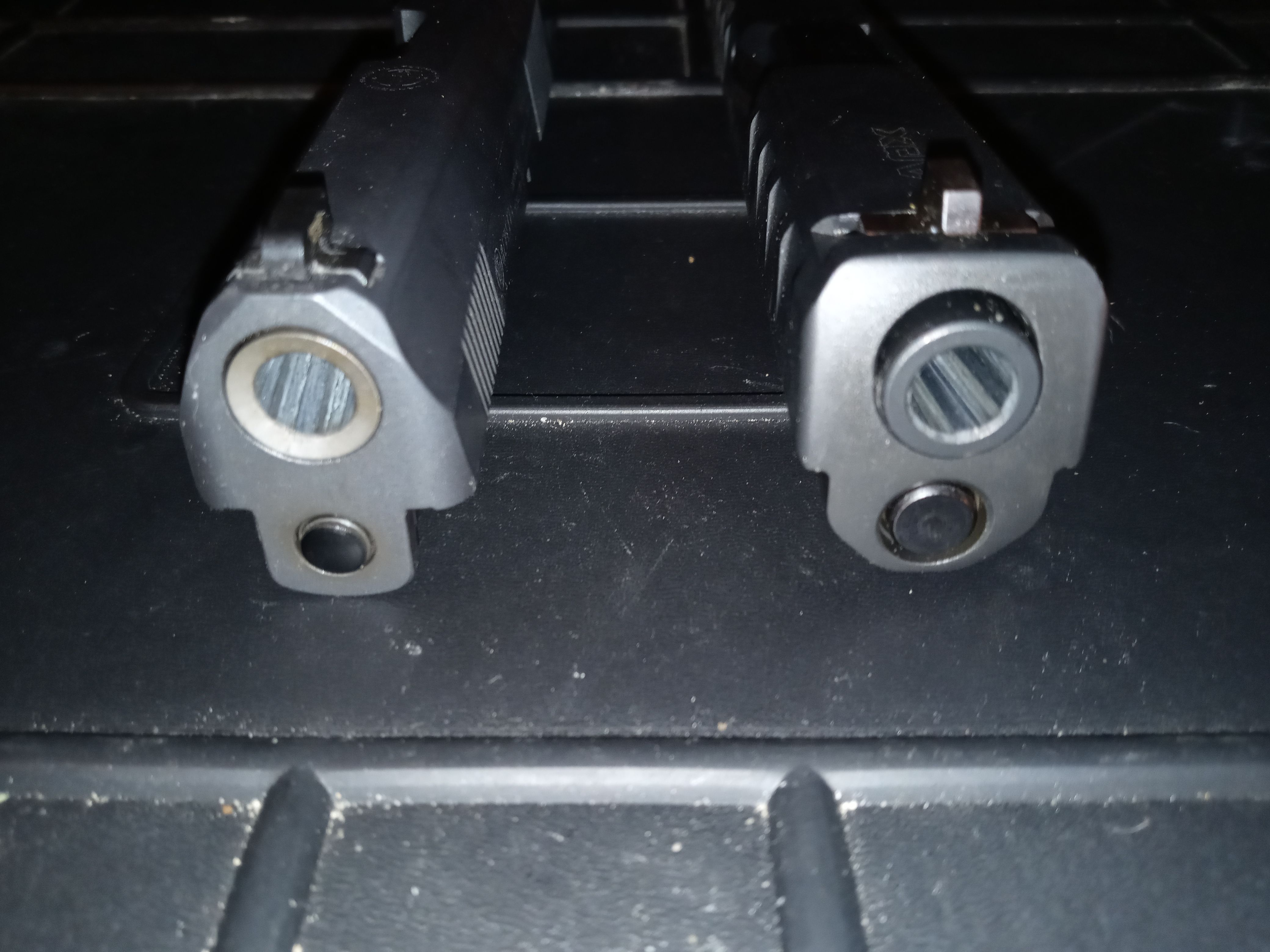 Reliability has been good. I have roughly 2500 rounds trough the gun. Shooting it has honestly not been a huge priority, but I have had zero jams or stoppages with brass, steel, aluminum, JHP/FMJ, whatever. I will note that through these 2,500 rounds the gun was cleaned 3 times. Not a rigorous test, I know.

The finish. Gone is Beretta's traditional Bruntion, in is nitriding. It works well enough. No rusting or unusual wear, so no complaints

The big problem(s) the first big problem is the slide serrations, they are garbage. They work ok with gloves (what doesn't), but with bare hands coveted in sweat, blood, mud, they become nearly unusable. I really do not like them. That said you can put grip tape in the recesses and that works ok. The next problem, the slide stop. Occasionally it doesn't fully stick up in the notch in the slide and is extremely easy to drop. This does not manifest during firing, so in my opinion it's not a big issue. Just don't be gentle with the gun and you'll be fine. Another thing is that detail stripping the slide is kind of a PITA. It is technically Glock simple, but Glocks just kind of "fall together", while the Beretta takes a bit of effort to put together or take apart.

One thing about the APX I do like is the magazines. They get kicked out of the gun with authority. They also have very nice baseplates with a good lip to help you rip the mag out during a malfunction. Magazines are proprietary, and look more like an FN pistol mag, but seems to be a bit more durable compared to FN. The release button is reversible, located in a good position, and is not too big or too small. 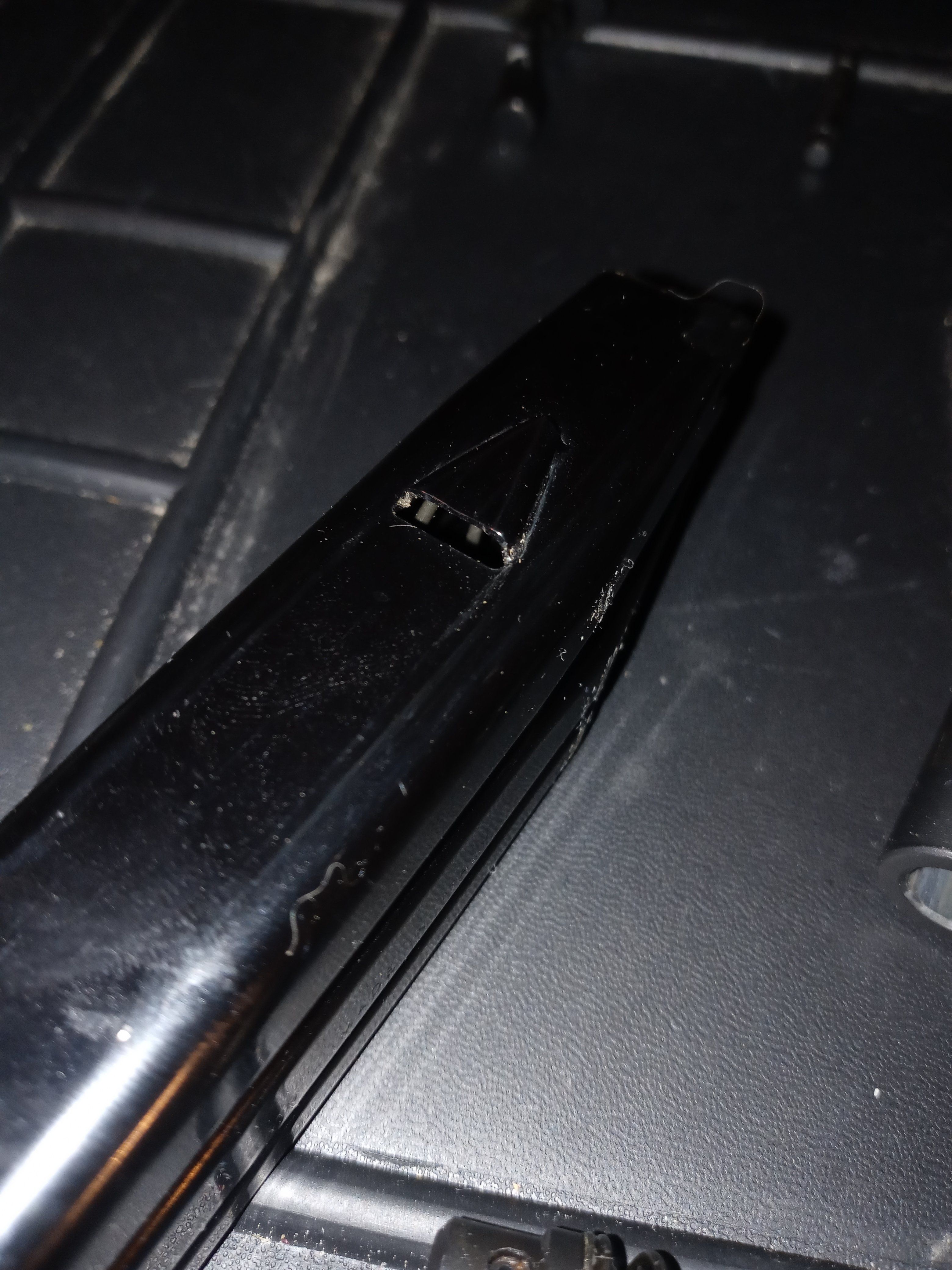 The APX can typically be found for under $500, and for that it's a great gun if you can deal with "quirks". I'm not a crazy huge fan of it, but that may just be skewed expectations coming from an M9a3 and LTT PX4. If you are a striker fired guy (or gal) the APX might be worth checking out, but I think the PX4 and 92 family outclass it. And in the world of striker fired guns, i'd rate it lower than Glock, higher than Sig.

The APX is what it is, a military ready pistol available at pretty great prices. It hits all the beats a handgun needs to.

Thank you for the review!

I too, am brand new to the Beretta APX.

I can honestly say, I do love mine a lot. It isn’t as bulky as a Glock, and I think it’s just a hair better than SIG. The reason being that it has a lower bore axis than the SIG’s, and that helps in taming recoil, a lot.

When I first saw them come out on the market, I didn’t like the way they looked. Still not a huge fan of the look, but the Beretta quality is there.

I’m a much bigger fan of the 85, and 92 series of pistols. They have the classic lines, and are as accurate as all get out. 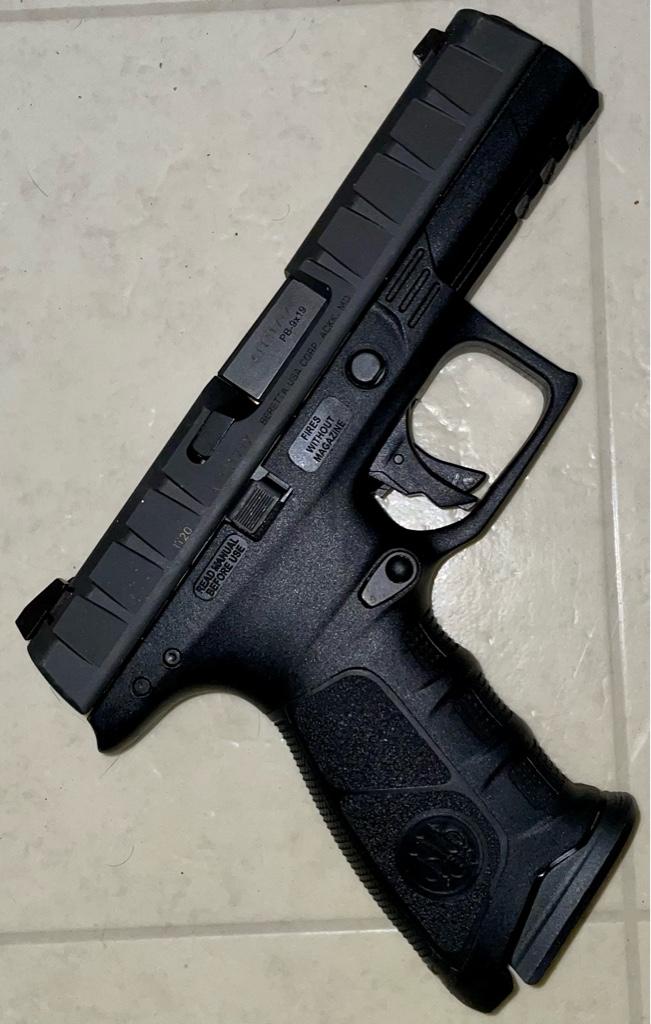 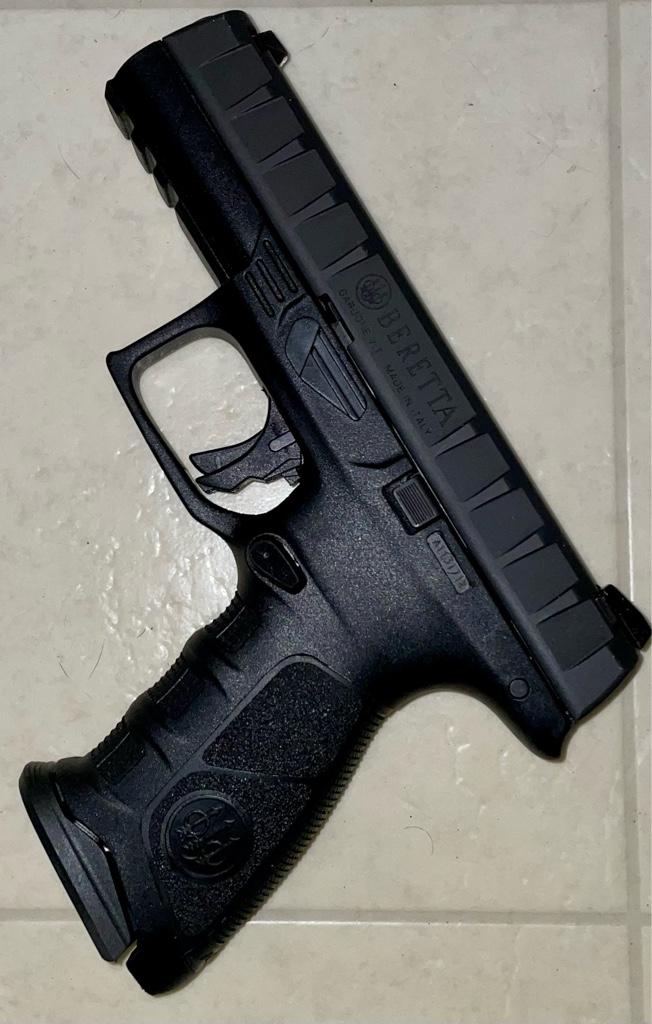 Yes, nice review, thanks for bringing attention to this pistol. Now my wish is Beretta would make a CX-4 adapter for the APX mags.....

I can count to potato

Chips n Salsa said:
Yes, nice review, thanks for bringing attention to this pistol. Now my wish is Beretta would make a CX-4 adapter for the APX mags.....
Click to expand...

I don't think that would be possible. The APX mag is similar in size to a PX4 mag, but the PX4 mag, like the 92 mag present cartridges up rather high into the action since the chamber doesn't tip down on the PX4 or 92.

It's interesting that you speak pretty highly of Glocks in comparison, yet claim not to shoot them anymore.

It's interesting that you speak pretty highly of Glocks in comparison, yet claim not to shoot them anymore.
Click to expand...

I sold my last glock, a G45 maybe a little over a year ago, but it wasn't because i didn't like them, just that after awhile I figured out what I wanted. It just took almost 100,000 rounds
O

oscars774 said:
What do you think about the APX Centurion I saw one for $379 and I did like the trigger