Hoji said:
Asian Lives Matter would literally cause liberal heads to explode ( much like in the movie “Scanners”
View attachment 255691
Click to expand...

Havent you heard this momth is API appreciation month


We have a month to appreciate and celebrate all ethnic classes.

Ya know the privileged one

TheDan said:
Do you still work in Houston as a LEO?
Click to expand...

Sent from my SM-G965U using Tapatalk

Danny2021 said:
Florida seems to be making a lot of decent decisions lately.
Click to expand...

Indeed. I heard a clip of Ron deSantis speaking on this very topic last night. He has the right idea. The rights of the law abiding citizens must come first and people who do this crap need to know that his state will not tolerate it. Basically: if you come to our state for this nonsense, there will be consequences.

candcallen said:
I'm talking here only about a fake or toy gun or object you insinuate is a gun not about any particular incident as the variables of real life may effect the legal outcome. And I'm not a lawyer.

That said....
Technically, if you point anything like that, fake or not its legally considered a real gun aka ADW.

So you you are threatening deadly force and if they decide to respond with deadly force of their own they are justified and you just brought a pepper ball gun to a real gun fight.

Same goes for your finger in your coat pocket or a gun shaped wood carving. If you're insinuating you have a real gun while threatening with it you may just win the grand prize.
Click to expand...

I'm saying if the police try to interact after the fact, handing over a pepper ball gun is genius level... If deadly force is needed, I would of course not pull a toy out.
T

Looks like Texas A.G. Ken Paxton is not pleased with Plano's Chief of police. He had one of his top deputies interview the Chief and got multiple different versions of what happened, with the Chief stating “We have to negotiate with these people. Do you expect us to mass arrest the protesters?" 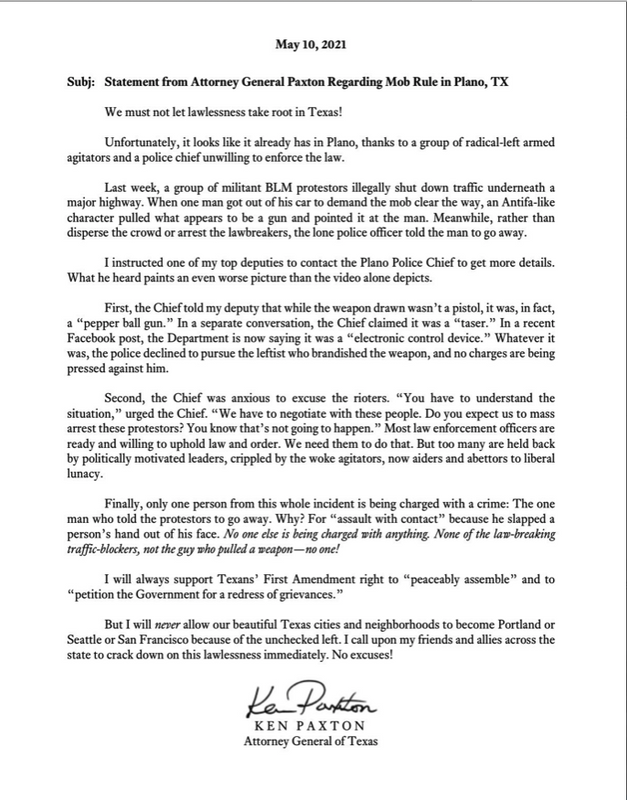 candcallen said:
Technically, if you point anything like that, fake or not its legally considered a real gun aka ADW.
Click to expand...

Here is a different screenshot from the previous one in this thread, this one from Paxton's Twitter. 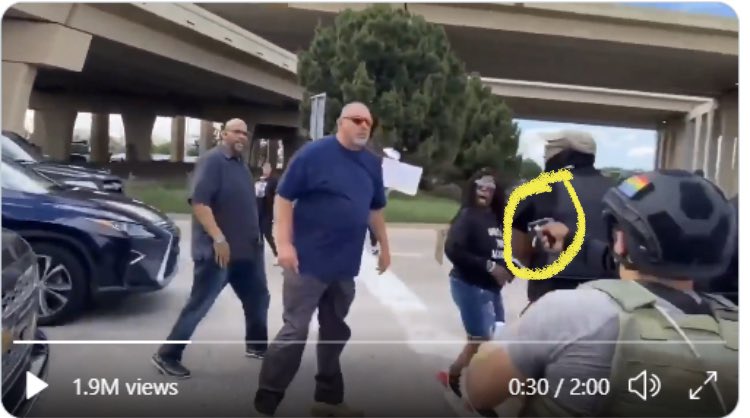 Danny2021 said:
The DA in the cities are bought and paid for by BLM.
Click to expand...

The groundwork was laid long ago.

...under-the-radar political investments made by progressive groups in recent years are paying off.
Click to expand...

The harmony of the Pen and the Sword

The Mayor of Plano is from New York City, so you can imagine what kind of police chief he would appoint.
O

benenglish said:
The groundwork was laid long ago.
Click to expand...

Self Appointed Board Chauvinist