Burglar attacks 72 year old with a knife, and gets a can of whoopass opened on him! 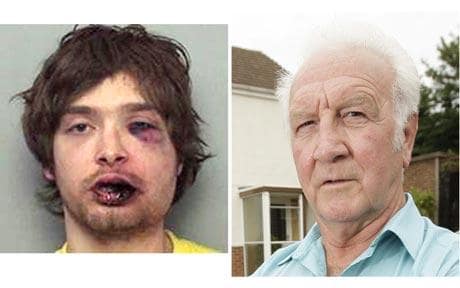 The court heard Frank Corti (right) was at home in Botley when Gregory McCalium, a neighbour, forced his way in Photo: PA / SWNS


Frank Corti, 72, who served with the Royal Engineers in North Africa from 1956-58, dodged the knife and punched Gregory McCalium, 23, twice in the face, giving him a black eye and a swollen lip. He then restrained the attacker until police arrived.
McCalium, a barman, was given a four-and-a-half year prison sentence at Oxford Crown Court on Monday for aggravated burglary and was told by the judge he had "got what he deserved".

The court heard Mr Corti was at home in Botley, Oxford, with his wife Margaret, 72, when McCalium, a neighbour, forced his way in at 8am on Aug 19 last year. McCalium was drunk.


Speaking after the case, Mr Corti said: "I was scared when he first drew the knife, but my old training must have kicked in because I just punched him as hard as I could and he went down like a sack of spuds. If you can't defend what's yours, where are we at?"
McCalium had denied the charge and claimed he could not remember what happened.
1

Great story and moral is old folks have more experience and my just give you the worst ass whoopin you ever had.
R

Three cheers for the old dude! I'm just surprised that the authorities in the UK didn't charge him with assault...
T

I love the pics +1 for defending whats yours
M

TxEMTP69 said:
I love the pics +1 for defending whats yours
Click to expand...

Can you imagine what it would be like to have to explain that a 70 year old man did that to you - LOL!!!!
From the pic's that's a wily old fart!

MadMo44Mag said:
Can you imagine what it would be like to have to explain that a 70 year old man did that to you - LOL!!!!
From the pic's that's a wily old fart!
Click to expand...


I can see the prison talk.

What are you in for?

I was burglering a some 70 year old person's house house

How did you get caught, leave your DL at the scene?