Candidate for the NFL?

oldag said:
Read that he is being charged with assault.

That article also mentioned he had been suspended in the 2019-20 soccer season after a similar incident last season. I give him a few more years before he rages out and kills someone or is killed himself. 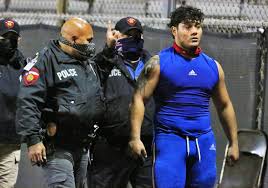 Assault charges filed and school has forfeited the playoffs. Sounds like justice is being served.

I agree with Ben. The coach should be fired for his words, but I am sure he is a "Winning Coach" so all is OK. This is what is wrongs with sports in general, win at all costs. No ethics or morals, the coach should have said he is having the kid expelled from school and asking for charges to be brought.

benenglish said:
Want to know how stuff like this gets enabled into existence? Check out this quote from Edinburg High head football coach JJ Lejia:That's all that matters? His team wins and they make it to the playoffs after one of their guys does something like this and "That's all that matters"!?! How the bloody hell could those words come out of the mouth of that coach? I invite that idiot to get on a fast horse and ride it straight to hell. The example he's setting for his players is, at best, incompetent. In reality, it's much worse. EDINBURG — The Edinburg High Bobcats and PSJA High Bears met Thursday night at Richard R. Flores Stadium to play a win-or-go-home District 31-6A zone play-in game that started off with a frenetic pace. But the moment was bittersweet for the Bobcats, who lost their best defensive player during a...

www.themonitor.com
And the stupidity seems to be widespread down there. The local newspaper headline refers to the team advancing under these conditions as "Bittersweet"? WTF? What's wrong with that player, that coach, that program, that school, that paper, that town?

These are the times that make me very, very happy that I moved out of the "small-town-Texas, HS-football-is-our-religion" hell-hole I grew up in. EDINBURG — Edinburg CISD released a written statement Friday morning saying that the district has decided to remove the Edinburg High Bobcats from postseason play in response to an ugly on-field incident that saw the team’s star defensive player instigate a physical confrontation with a referee...

This post means so very much to me. Thank you. It's absolutely true, this attitude comes from the HC. I see it all the time on Thursdays and Fridays.

The UIL is so lax with handling incidents and behavior that it eventually leads to bigger issues like this happening.

Quite a shame.
I fully agree with Ben's assessment.
That said, I really think this guy could have had a future in physical sports. Gone like a fart in a bucket of nails. Won't be recovered. Won't be forgotten.
I hope he recovers and gets his shit straight.

Dougw1515 said:
Well... He needs to complete his requisite prison time then... well hell yeah sign him up!
Click to expand...

From the looks of him, he's already been to prison. I want to see his birth certificate, he looks more like 25 years old than a high school kid.

deemus said:
CBS article about him being charged.

I guarantee you one thing:
That apple didn’t fall far from the tree.

It warms my heart to see so many comments that I have seen on this thread. That ethics and morality mean more than winning some football game, regardless of the costs to others.

Hope the judge orders him tested for steroids.....

....also, the ref could technically be considered a school employee via contract. That could bump the assault up to a felony if the DA pushes it.