Coolest guns in the movies

Hi,what is your favorite gun used in the movies?This one is a mac10 used in falling down staring Micheal Douglas.

Here are some favorites:

Some sort of anti aircraft gun (Polish I think) from The Jackal: 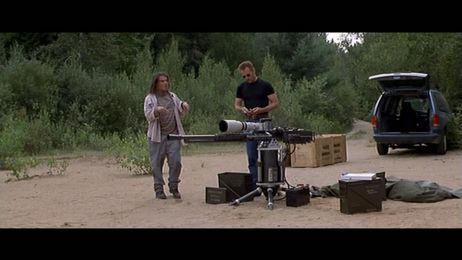 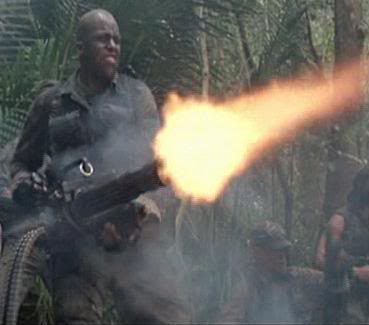 +1 on the predator mini-gun.
M

I really think that guns in the movies give them a bad reputation. The half wit democrats see the unrealistic things done in the movies & make them out worse then they really are.

baboon said:
I really think that guns in the movies give them a bad reputation. The half wit democrats see the unrealistic things done in the movies & make them out worse then they really are.
Click to expand...

Yeah I agree. What's worse is that, in movies and TV, some of the most ridiculous things get done with firearms that aren't even remotely possible in real life and it really gives the uninformed public a lot of misconceptions that eventually get used against us. For example, CSI Miami has a TON of incorrect and completely false gun-related things in it. I enjoy the show, though I can't stand all of the stupid sh*t that happens on that show. In one of the more recent episodes from last season, an arms dealer started selling some "Fused Alloy" bullets. Basically what they were talking about was frangible ammo. In the show, they were saying it is the most deadly ammo known to man, and that it can easily pierce through any body armor. Nevermind the fact that this is impossible since frangible ammo is designed to fragment on impact and provide the least amount of penetration possible. There was also an episode where an arms dealer on the street just happened to get a hold of one of those Metal Storm things. You know, the firearm devices and weapons batteries that are designed to fire utilizing electronic pulses, so they have a ridiculous rate of fire, plus they have a ton of barrels? Yeah, right, like one of those prototypes (of which there are probably only a couple in the world) is just going to go missing from some DOD contractor's lab and of course no one is going to be looking for it except good old Miami-Dade PD officer David Caruso, in all his sunglasses donning glory.

lol I could go on and on and on.....but then I'm sure ALL of you are painfully aware of the stupidity on tv these days.

The Walther PPK used by James Bond is a classic.
T

The rail gun in Eraser.