Hello. I recently picked up a very lightly used S&W Model 60-8 with 3" bbl and adjustable sights. A routine once-over didn't result in any surprises or reveal anything negative...other than the rubber grips, which happened to be a style I just don't care for.

Getting it home, I cleaned it up, made another check, more slowly this time, and changed the inexpensive rubber grips with a cheap wooden pair that felt better to me. I am not sure if they'll stay on the gun or not. (They definitely will not if I opt to use this one as a defensive arm. The reason is two-fold: They will not work with speedloaders for one and when ejecting fired cases, the one at the bottom (six-o'clock) position is impeded from being ejected by the relatively thick grip panel. Modification of these stocks or using a different style would be necessary in my opinion.) 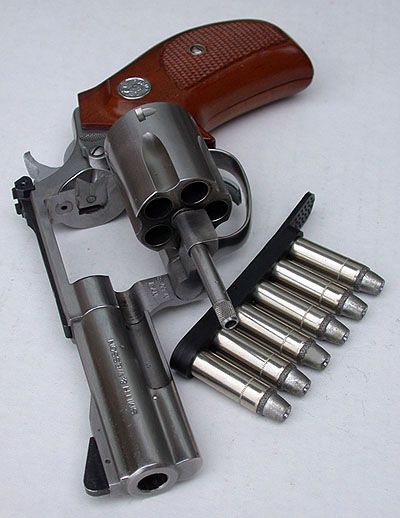 My only other 3" Model 60 was one having the J-frame style square butt, a heavy bbl with no shroud. It sort of resembled a shrunken Model 64. I believe that this is my first one with adjustable sights.(The ammunition shown is a handload using 4.6 grains of Unique beneath a Hornady 158-gr. LSWCHP. This hits about 860 ft/sec from other 3" guns I own, though I have not yet chronographed it through this one.) 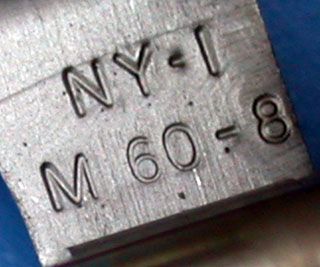 I was surprised to see the "NY-1" marking on this little shooter as it has a spur hammer and is capable of both double and single-action fire. The only revolvers I've seen with such markings were K-frames having bobbed hammer spurs and DAO.

Despite having been a police department tactical team leader and firearm instructor for 11 years, I do not feel the need for "tactical" handguns and by modern standards, I reckon this would not be one. Nor do I feel the need to make all of my range visits "practical", defensive style shooting. For me, fun still rates high on my list, right up there with my multitudenous regrets for letting all of the S&W Kit-Guns I've owned in past decades get away. For now, I envision this little 60-8 with perhaps a hard cast SWC loaded to standard velocities as a sort of substitute. I might just wind up shooting it at paper simply because I like to. That's good enough for me. Years ago, I was told by a shooting legend (in his own mind) that I obviously didn't understand "the purpose of the handgun", for if I did, I wouldn't even own a revolver, just a certain style and caliber autoloader. I didn't mention to the blowhard that I already owned 11 of the pistols he was pushing. I didn't bother to mention that the purpose of my handguns is whatever I want it to be. I suggest that the same is true for any handgun owner or shooter. The purpose of their handguns is whatever they desire.

I've been extremely busy lately with little time to shoot but today I managed a few minutes at the range with the little S&W. It was off-and-on windy and looked like rain was a distinct possibility, so I only shot at 12 yards, using a two-hand hold from a standing position. I used two loads, both from Georgia Arms. One was their light 125-gr. LFP at a listed velocity of 750 ft/sec and the other a plated flat point, although they describe it as a SWC. It's velocity is listed at 800 ft/sec. I didn't have time to chronograph either load and it was so overcast that I'm not sure I could have.

I began by firing 5 rounds of the 125-gr. load and discovered that the POI was slightly below the POA at 12-yards. Making a vertical sight adjustment, I got it to put the holes where I wanted them, at least at this distance. 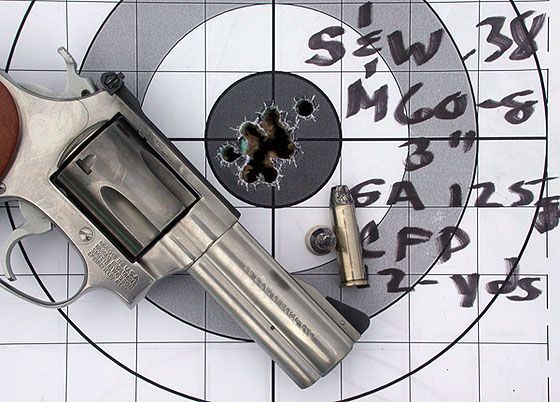 In this 20-shot group, I think that the true POI is just below the center of the dark 2" bullseye and that the hits just above midline are errors on my part. 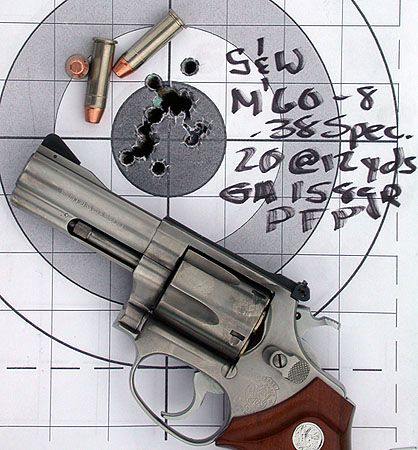 Likewise, in this 20-shot group using the heavier 158-gr load, I think that hits at or below the midline are my fault. It's fairly obvious that the little gun was intially sighted in for the 158-gr. bullet.

I find it a good thing that at this distance at least, either load hits close enough to POA for decent "fun shooting" or even some target-shooting w/o having to change the sights.

The action on the little thing was slicker than I expected and I feared that perhaps a too-light mainspring had been substituted. 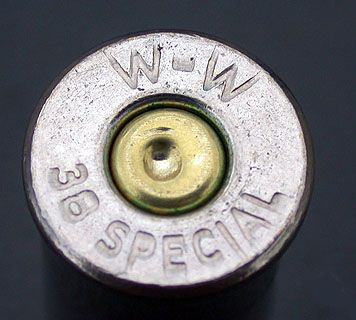 Today's session consisted only of about 80 shots of Georgia Arms' "canned heat" .38 Special ammunition but there were no misfires and primer strikes appear adequate. That is not sufficient shooting for me to trust the gun for anything "serious" but that's no great "loss" as I have plenty of "serious" ones already.

On a ranch where I frequently help a friend do chores, there were untold numbers of water moccasins in years past. I am not sure why as there was but a couple of ponds and they were not near one another. There is a creek on it, but it is only on one border. Anyway, the stinkin' things were all over. I wacked many to death with tree limbs but shot a few, too.

Though I've not seen any rabid critters there, I have seen a rabid fox or two over the years and perhaps four rabid skunks. All attacked when they heard or smelled me (I'm not sure which...if either) and in each case a firearm (.22 rifle in one case, and 9mm Hi Power in the others) stopped them and humanely dispatched them.

Perhaps this little 3" .38 Special will make a most compact, yet easy-to-shoot sidearm for such considerations?

...or maybe the truth is that I just like the darned thing.

Congrats on your new toy.
J