I put in 3 strawberry plants that arrived just after the freeze. Trying a hanging basket for the first time. My house backs to the greenbelt so I have more critters to deal with. Had to build a cage. If this works out I will put in a small raised bed. I am a beginner at this. 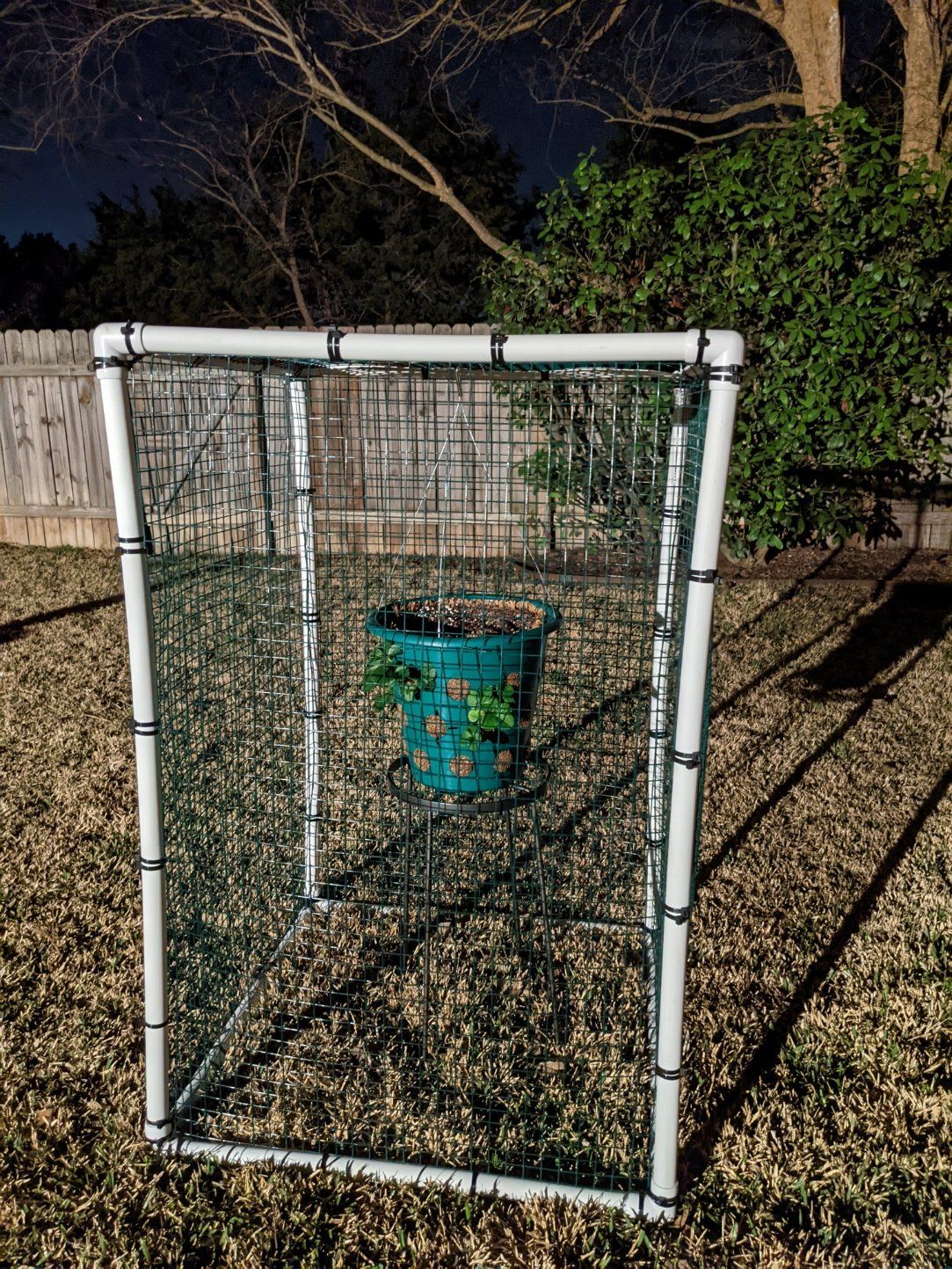 That is a good idea for a cage, I like it. I put out 20 strawberry plants, just potted them up in some nursery pots. I will later drape some bird netting over them. Other critters, no issues to date, fingers and toes crossed.
L

About $20 in PVC fittings and pipe and zip ties. Fencing I had already. The other critters regularly show up in my yard. Racoons especially almost nightly.

CORN, this has been an issue this year, I must have received a bad lot. Out of 250 seeds planted only 2 germinated!!! Today I re-worked the ground where I had planted before and once again sowed a new lot of seeds. Strawberrys' have been something also, they were growing just fine, blooming and putting on small berries, then the edges of the leaves on some started turning brown and the plants died, only 9 of the original 20 remain. Same soil, and the same ratio of fertilizer, I thought it may have been weed spray drift from the "nearby" rice fields when they sprayed, but it didn't hit all of the plants, ditto with some of the bush beans. Kind of strange, plants near the beans and strawberries were not affected.

Potatoes are doing well and starting to bloom, kale, collard greens, leaf lettuce, and kohlrabi are thriving also. I have been picking and eating the young lettuce, collards and kale for the last week. I was late getting in cucumbers but they are up. Some seeds that I planted to make "starts" did not germinate well either. I blame that partly on myself since I just planted them in cups outdoors and did not start them indoors this year, most likely the cooler nights are the culprit. Yellow squash and zucchini are coming along nicely and I expect to see blooms within two weeks or less.

Mole crickets have been a bit more "mild" this year, although I did kill one of the ugly little suckers today. Snails on the other hand have been terrible, I have been crushing them as fast as I find them, I hate wasting even cheap beer to trap them.

While, I am behind on getting some things planted, like tomatoes, jalapenos, serrano, and bell peppers, I am pretty happy with where I am. Onion starts and sweet potato slips still have not arrived, but I have the ground ready for when they do.

The aftermath of the "Big Freeze" has meant death to my citrus trees as well as my fig trees. I have ordered some of the RAZZMATAZZ grapes to try those. At maturity, 3 to 4 years can make 60 to 80 pounds of grapes per plant!! I also have ordered a different variety of strawberries (WHOPPER), which hopefully will do well. In addition, I stumbled upon a type of radish "GERMAN GIANT PARAT" supposedly, they can reach the size of a baseball and not become hot or woody!
L

I am trying the Elan F1 strawberries. Supposed to be excellent sweetness and flavor with smaller berries and keeps producing. Doing good so far! 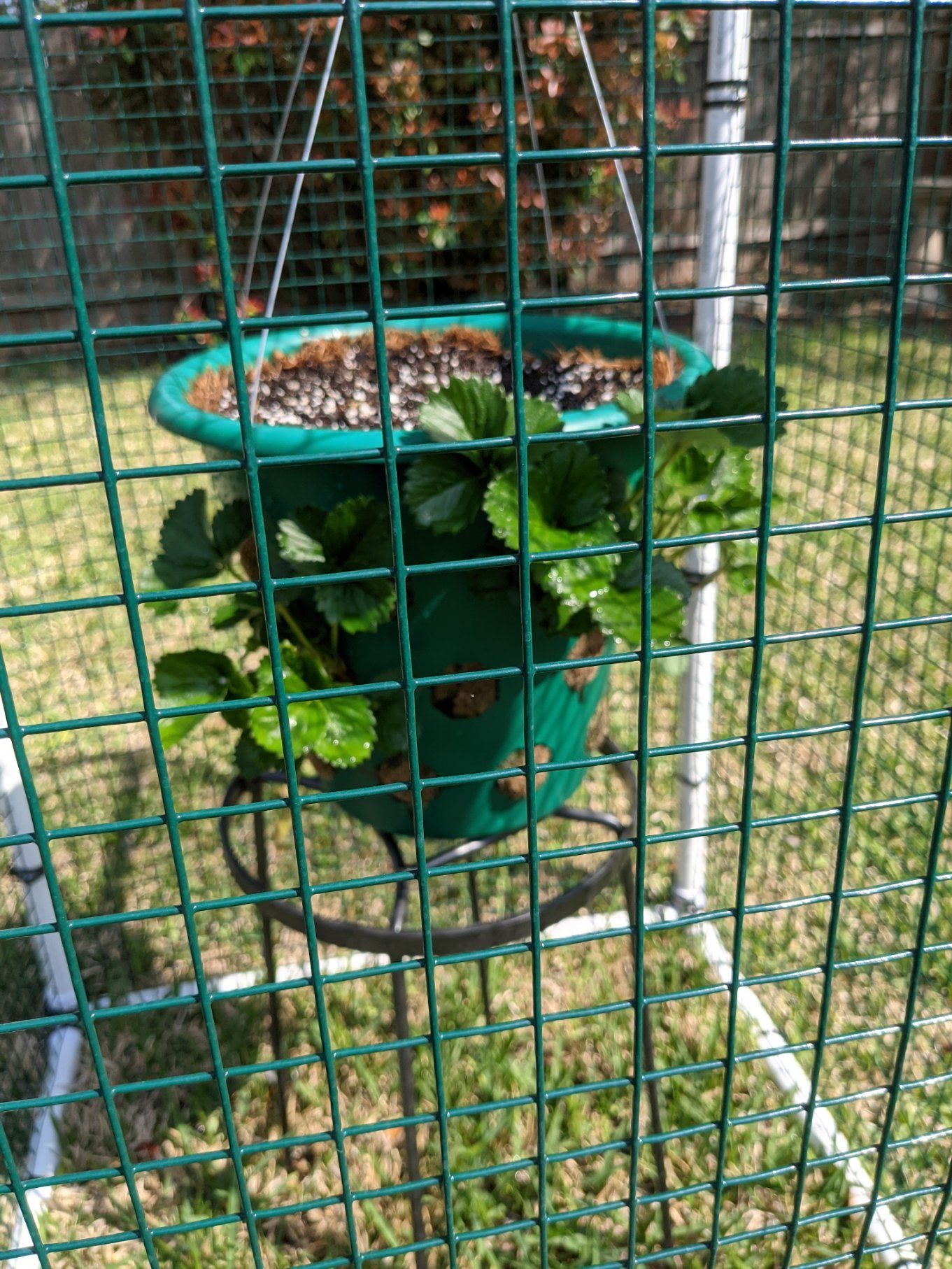 lightflyer1 said:
I am trying the Elan F1 strawberries. Supposed to be excellent sweetness and flavor with smaller berries and keeps producing. Doing good so far! View attachment 250537
Click to expand...

They do have a very nice and healthy color to them. I hope you make some very tasty fruit!

UPDATE 4/4/21: I was going to cut the fig trees down today, what do you know, 2 of the 3 have new growth coming from the roots!! Damn, that sure made my day!

Finished building the grape trellises so when they arrive I can plant them, also built new tomato trellis about 8.5' above my raised beds, hopefully, this year I will not run out of trellis space.