I usually shoot laying in the dirt but there is a rise at 200 yards that blocks the target when shooting from 300. After a couple attempts at movable benches I finally gave in and built a permanent one. Did it in a way that required the minimum number of tools, planning, and cost.

Table dimensions are 4'X5'. About 32" tall and the seat is 13" below table height. I've had a lot of trouble getting the seat height correct so I did a lot of sitting and measuring. 13" seems about right.

I drilled my holes about 10" deep. That are of the property is sand but it's packed so hard it's like drilling through sand stone. Had to soak with water, drill down an inch, and soak again. I recommend going deeper for softer ground. You want to set your posts 1.5" inside the final dimensions so after building the frame around you will be at the right size. To save setting up strings to mark your holes and keep it square you can cut the table top to size, lay it on the ground, mark the corners, and come inside those marks to place the hole. Remember to move inside so the post will not be set all the way in the corner.

I cut my 2x6 frame to length. The long sides are cut to 5', short sides cut to 45" so the corners come out flush. Then I set the post in the holes (no cement), estimated the final high on one corner on the bench end and marked it. Take a 2X6 that's cut for the frame, start a screw, get it close to the mark and put one screw in.

Now move to the other end, lay a level on the 2X6, hold the post up fairly straight, level the 2x6 and run the screw in. Is the board to line up your next 2X6, one screw, then level to the next leg. Repeat until you have the top framed by 2x6. Double check with a level on each side and adjust as needed. Legs should be close to level but it's not a big deal.

At this point you should have 4 post sitting in holes connected near the top by a level 2X6 frame. Measure diagonal across the corners to make sure it's square. If not shift one side and measure again until it's close enough for your standards. Once square, pour cement in the holes and leave it to cure.


Come back once cement is cured, mark the posts for cutting by running a pencil along the top of the 2X6. Pull the 2X6 off but make sure they don't get mixed up. You want to put them back in the same spot. Cut the tops of the posts at the marks. Reattach the 2X6. Double check level again if you're a perfectionist. Now add a couple more screws to each end of each board.

Now lay the plywood on top and screw it down. I like a screw every 18" or so.

With my dimensions I had two drops left over from the first two 2X6 that fit perfectly across the seat supports. I moved them back so a couple inches of the back board were hanging over to make it easier to get in/out of the seat. Lay them on the supports and sit at the bench to find where they're comfortable and screw then down.

Mostly done now. Take the extra screws and put them around the 2X6 frame and anywhere you think could use them.

And it's done. I'll probably set a post for the seat at some point to make it easier to get in/out. It will also need to be sealed. I used untreated lumber because the treated lumber I've dealt with recently has been way too green and warps really bad as it dries.

Sounds like it is stout enough. Should work just fine.

Sent from my SAMSUNG-SM-G870A using Tapatalk 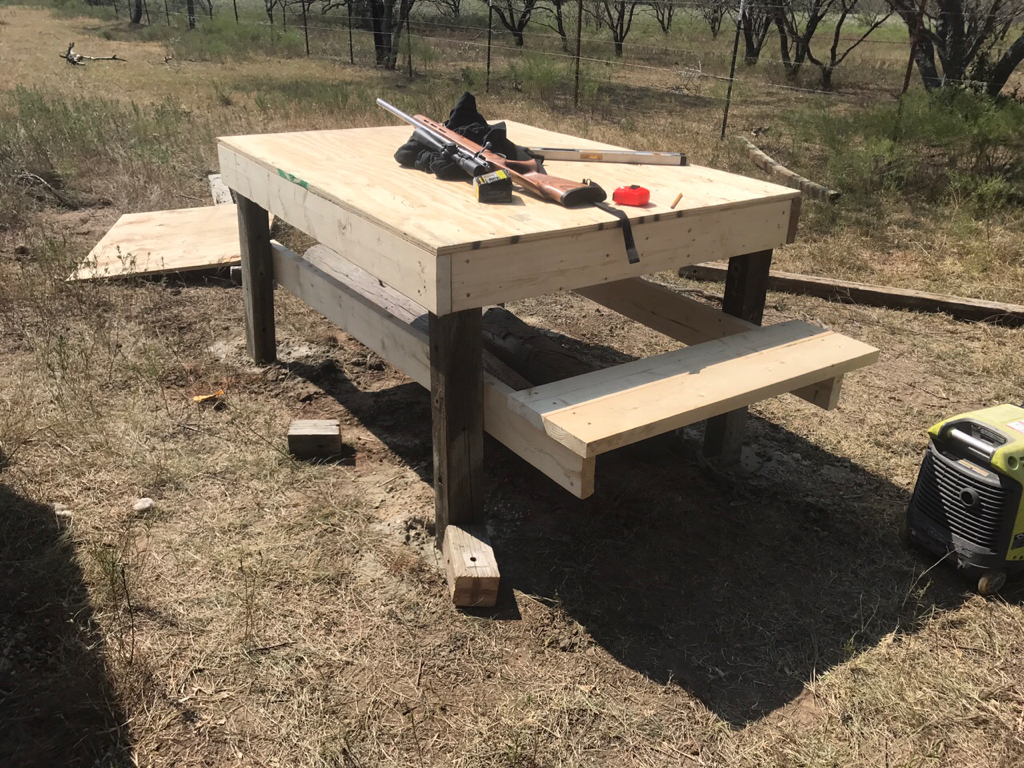 I've got some screen mold laying around somewhere that I'll probably put around the edge to keep brass from rolling off, and may add some 1X2 so I can put forward pressure on bipods.


I'd say it's firm enough and wide enough that a shooter and spotter could share the bench without having movement issues. Might be a little cramped depending on body size. Long enough to handle pretty much any size rifle. I made sure it would handle the length of an AR50.

jrbfishn said:
Sounds like it is stout enough. Should work just fine.

Sent from my SAMSUNG-SM-G870A using Tapatalk
Click to expand...

I'll probably run a couple 2X4s underneath the table top as I come up with the scraps to keep it from warping or sagging in the middle, but it doesn't have any give to it.

How much does it weigh?

Idk, maybe 100lbs. Didn't really consider the weight when building since it was cemented in to the ground.

As a portable bench it would need a lot more framing to make it stable and the seat would need to be separate.

Younggun said:
I'll probably run a couple 2X4s underneath the table top as I come up with the scraps to keep it from warping or sagging in the middle, but it doesn't have any give to it.

I was wondering about that. A couple should be enough. Not like you are going to be walking on it. Pretty much the same process I used to use building decks

from an idjit coffeeholic

Younggun said:
Idk, maybe 100lbs. Didn't really consider the weight when building since it was cemented in to the ground.

As a portable bench it would need a lot more framing to make it stable and the seat would need to be separate.
Click to expand...

I just realized it's cemented into the ground. Nevermind on that!

All of my attempts at a free standing bench were failures. I just wasn't getting them stable enough for the kind of shooting I like to do.

Not that it isn't doable, I just like trying to keep things cheap and it takes a lot of braving to make a free standing bench really solid.

Good lookin' setup. Now maybe when I get a chance to come by, I won't end up lookin' at the sky.