Broke down south of Dallas

Doubt it will go anywhere but this is something to keep an eye on. The 8 co-sponsors are all Dems, none are from Tx.
Seems what they want is to make any rifle with a detachable mag subject to NFA although I cannot find any text of the actual bill
Here's what I found so far https://www.govinfo.gov/bulkdata/BILLSTATUS/117/hr/BILLSTATUS-117hr4953.xml 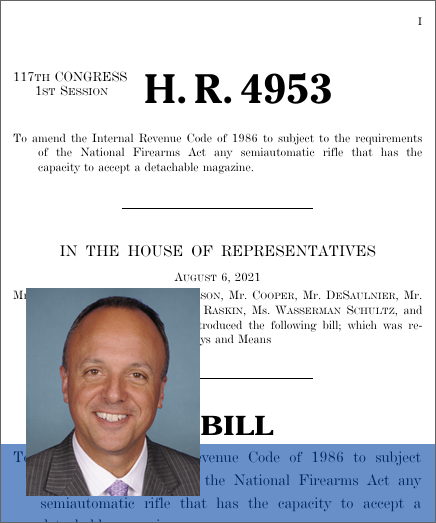 To amend the Internal Revenue Code of 1986 to subject to the requirements of the National Firearms Act any semiautomatic rifle that has the capacity to accept a detachable magazine.

They are just looking at all the money they could steal if it was to pass. BATFE cannot handle it's current workload, how in the phuc could they ever swing this?

baboon said:
They are just looking at all the money they could steal if it was to pass. BATFE cannot handle it's current workload, how in the phuc could they ever swing this?
Click to expand...

No, they are looking to make it so expensive nobody would get a detachable magazine gun.

Wish I had some. Might be some money to be made.
P

how about they suck my hairy mexican ass and try to take my magazines lmao.

AFAIK, there isn't any text yet. And as of this morning there hadn't been any official news release by any of the sponsors.

Not sure if they are playing it on the down low, or if it is just very early in the process. But agree it's prolly going nowhere. We should keep an eye out anyway.
Last edited: Aug 10, 2021

I pledge to give up my magazines- bullets FIRST!

My understanding is that Titles for bills are often placeholders.... and the text and other details worked out along the way. Even the initial text and bill often looks nothing like the end result.

In fact, this has been used as subterfuge in the past. Get something started that kinda flies below the radar, then change it later to be what they really wanted, and pass it as an emergency bill in the middle of the night at the last minute.