I think we should remove "disabled" from the dictionary

I am just sick of hearing people who say they are "disabled." I'm serioius. Cut off both my arms, and I'll figure a way to support my family. Tear out my eyes, I'll figure out a way to make a paycheck without em.

Pretty much everyone in the ER doesn't work. . . unless they are dying. Everyone else is at work. I've never seen anyone who benefit from being considered "disabled" and put on the public dole. It makes them not have to work, but it doesn't make their lives better.

We are heading towards the toilet as a country.

Nah, I'd say you lose a limb or eye or something you are indeed disabled.

The problem is lack of spirit. I knew a guy with one leg who mowed his own lawn, one push at a time, move the crutches, next push and on and on. He rode his bike around town and was always willing to help anyone.

So many people drawing disability and social security for disability aren't disabled, they are mentally, emotionally and spiritually hobbled.

Texas42 said:
I've never seen anyone who benefit from being considered "disabled" and put on the public dole. It makes them not have to work, but it doesn't make their lives better.
Click to expand...

I agree with that fully. It gives people enough to get by, but not ahead.

Disabled is a state of mind. 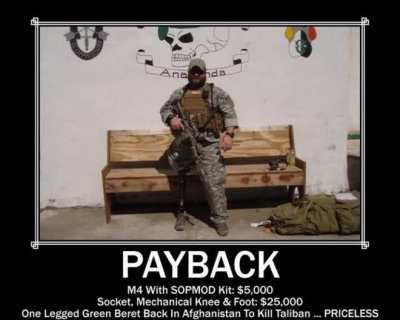 I think I was 18 or so, but it might have been younger, but my parents thought for some reason it would be a good idea for me to apply for SSI disability benefits. Thinking back they were probably just looking out for me and had no idea what the future held as far as working. Either way, I went thru the whole process of paperwork and interviews only to be denied. In retrospect, it was probably a good thing. From that day on I never looked back and just worked whatever job I could get.

I am not against disability benefits across the board, but I do agree it is out of control what and to whom, WE the taxpayers pay out for and to.
From what I understand there is no definition as far as the government is concerned as what "being disabled" exactly is.
Also, when one is denied and they hire a lawyer and go in front of a judge, There is no one from the government arguing against your case. It is up to the judge to be both the representative of .gov and be an impartial party. Sounds a bit screwy, personally.

My father once said to me that there were going to be times in my life were I would need to give 110% when everyone else was fine giving 100. And he was right. Sometimes being disabled slows you down, or causes you to pause and rethink how you do things and that means you are going to need to put forth a bigger effort for many things, but it's what it is and many people out there, doing nothing and just collecting benefits think just the opposite of that. They believe they are to be catered to just because they have given up trying. That's just a sad state of mind to live your whole life in.

I'm not one of those handicap cheerleaders, sitting here saying," it's no big deal" & "you can still do anything you want!!" Hell, sometimes it sucks, but you get over it, under it or around it or you just lay there and let it beat the hell out of you till you give up and die.

Some people are disabled. My wife had a car wreck in 1996 that left her in a coma for 3 weeks. She had a closed head wound which affects balance, 40% cut field vision in her right eye. Mentally she lost that control valve on things like temper, has short term memory loss, and a bunch more. She was a Professor of Photography. Can't even work something like a cash register or anything. No one would hire her because of the potential liability. She should be in a wheel chair but stubbornly clings to her rolling walker like the TEA party clings to its guns and religion.

So don't paint with too broad a brush.

ETA: I have a 70% disabled rating from the VA because your government (I say your government because mine would not have done that) poisoned me with Agent Orange in the drinking water in Vietnam. I don't consider myself disabled. I know my limitations and as my BIL said, if they are dumb enough to offer it, be smart enough to take it. Oh yeah, I go on Social Security next year, but that is not a hand out. I paid in for over 50 years. I still work and will continue to do so.
Last edited: Nov 14, 2013

I lost a leg and am registered disable and I still hold down a good job in the Oil and Gas Industry.

Sugar Land said:
I lost a leg and am registered disable and I still hold down a good job in the Oil and Gas Industry.
Click to expand...

And from the time at Hicksville, I never would have known.

Vaquero said:
And from the time at Hicksville, I never would have known.
Click to expand...