Just got this from GUBROKER

he question is constantly asked: Why do you want to carry a gun? Here are Massad Ayoob’s 7 proven answers vindicating concealed carry.

1. “Why do you carry a gun?”
Kathy Jackson said it best on her website (www.corneredcat.com): “I carry a gun because I can’t carry a policeman.”
2. “But aren’t you worried that if more people carry guns, more arguments will escalate into people being shot and killed?”
No. Responsible gun owners are too practical to worry about things that don’t happen. 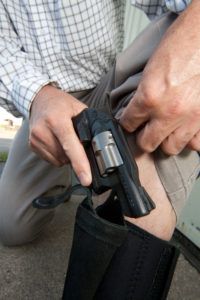 Ankle holsters allow business-casual dressers to be prepared at all times. Who could be against that?

3. “Why should a person who lives in a low crime area feel they had to carry a gun?”
Famed combat small arms instructor John Farnam said it best. He was teaching an officer survival class to rural police when one officer asked him, “Hey, how often do you think cops get killed around here, anyway?” Farnam’s reply was classic: “Same as anywhere. Just once.”
4. “Why can’t you face the fact that a study has proven that a gun in the home is 43 times more likely to kill a member of the household than a burglar?”
Probably because, being logical people, most of us who carry guns detest having to look at such fact-twisting exercises in sophistry.
5. “A review of strategy discussions on Internet gun boards reveals the fact that many people who are licensed to carry guns carry more than one. If this is not an indication of two-gun cowboy mentality, how else can it be explained?”
Firearms instructor and author David Kenik was once asked, “Why do you carry three guns?” He calmly replied, “Because four would be ostentatious.”
6. “You bloodthirsty gun people only carry weapons because you want a chance to hurt or kill someone!”
On the contrary, we carry guns so we will be less likely to have to kill or cripple someone. It’s called “Peace Through Superior Firepower.”
7. “You don’t have any right to carry guns anyway! The Second Amendment is about the National Guard, not personal protection!”
The Bill of Rights was framed shortly after the American Revolution. A “National Guard” in the time of the revolution would have been Tories loyal to King George and duty-bound to crush the American patriots. Do you really think this was what the framers intended to empower and enable?
Editor’s Note: This is an excerpt from the new Gun Digest Book of Concealed Carry, 2nd Edition. For a detailed analysis of these answers and more reasons on why you should carry, don’t wait to get your copy.