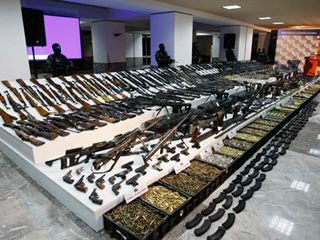 MEXICO CITY —
The Mexican army on Friday announced that it has made the largest seizure of drug-cartel weapons in Mexico's history.

The cache of 540 rifles, 165 grenades, 500,000 rounds of ammunition and 14 sticks of TNT were seized on Thursday at a house in the city of Reynosa, across the border from McAllen, Texas, Mexican Assistant Attorney General Marisela Morales said.
"The seizure ... is the largest in the history of Mexico involving organized crime," Morales told reporters at Defense Department headquarters, where the army displayed hundreds of rifles, pistols, and shotguns, and laid out rows of grenades and crates of ammunition.

Morales said the largest previous bust involved a cache of 280 weapons found in 1984.

The weapons in this latest seizure belonged to the Gulf drug cartel, an official said after Morales made her statement. The official spoke on condition of anonymity because he was not authorized to speak to the news media.

Soldiers detected the cache when they chased suspects into the home after the men refused orders to stop, Morales said. Three suspects were detained.
It was unclear whether the raid was related to an FBI intelligence report obtained by a Texas newspaper in October that warned the Gulf cartel was stockpiling high-powered weapons in Reynosa to prepare for possible confrontations with U.S. law enforcement. Morales did not take questions from reporters.

The man who allegedly leads the cartel's hit squad in the area, Jaime Gonzalez Duran, was mentioned in the FBI report as having ordered dozens of hit men to the Reynosa area as part of those plans.