Hello all, I have a mini 14 that won't eject shot shells.

The slide binds up. I can get it to open all the way but it requires extreme force to open.

How hard is it to disassemble the trigger and bolt assembly?

It it appears that something is out of alignment. Has anyone experienced this?

Any nay ideas would be appreciated.

It's likely that it's ammo related. Please specify the ammo that you're using.

Does the operating rod bind past the point where the cartridge is extracted from the chamber? On M1 Garands, we would remove the Op Rod spring and test the operation of the rod/bolt. It should go from one extreme to the other by gravity only with the that spring removed.

The operating rod on the Mini-14 is pretty solid, so it's hard to believe that it's messed up. The only 2 things that I have seen that cause such a problem are 1) ammo (as Roger4314 pointed out) or 2) the piston that the rod goes over (at the gas port) is completely fouled up with carbon. (My ex-father-in-law had a Mini that I had to use a hammer to get the rod to operate. He was under the strange assumption that you never had to clean the action and it was solid with carbon.)

Look on youtube for videos on taking apart the Mini. It's VERY easy to do. There's a hole in the trigger guard. You put a rod or screw driver in that and pop it loose. The entire trigger mechanism comes out in one group. That allows you to disassemble the rest of the action from the stock. The plastic guard on top of the rifle can be snapped off of the barrel. Remove the spring and the operating rod can be pulled down. There is a little notch on the side of the receiver and if you match up the operating rod tab with that, the rod can be removed. YOU REALLY DON'T NEED TO DISASSEMBLE ANY MORE THAN WHAT I'VE JUST DESCRIBED! The bolt can be a pain to get in and out and it really doesn't need to come out for basic cleaning. DON'T disassemble the gas port. Just clean it. It may take some work and an old toothbrush to accomplish.

Thanks for the info. Its not ammo related. I bought gun used and it doesn't look like it has been fired enough to be dirty.

After looking closer, it looks like the metal guide that the bolt rides on binds up and won't let the bolt come all the way back. In order to get it open I have to either tap it with hammer or really pound it with my hand.

I'll look up video and take action apart and give it a good cleaning. Maybe once it's open I will be able to see where its binding or just mega dirty.

I cannot picture a slide on a mini 14.

I guess what im calling a slide is the groove the bolt slides in. The back of the bolt acts like it is hitting metal on metal.

Maybe pic will clarify a little. 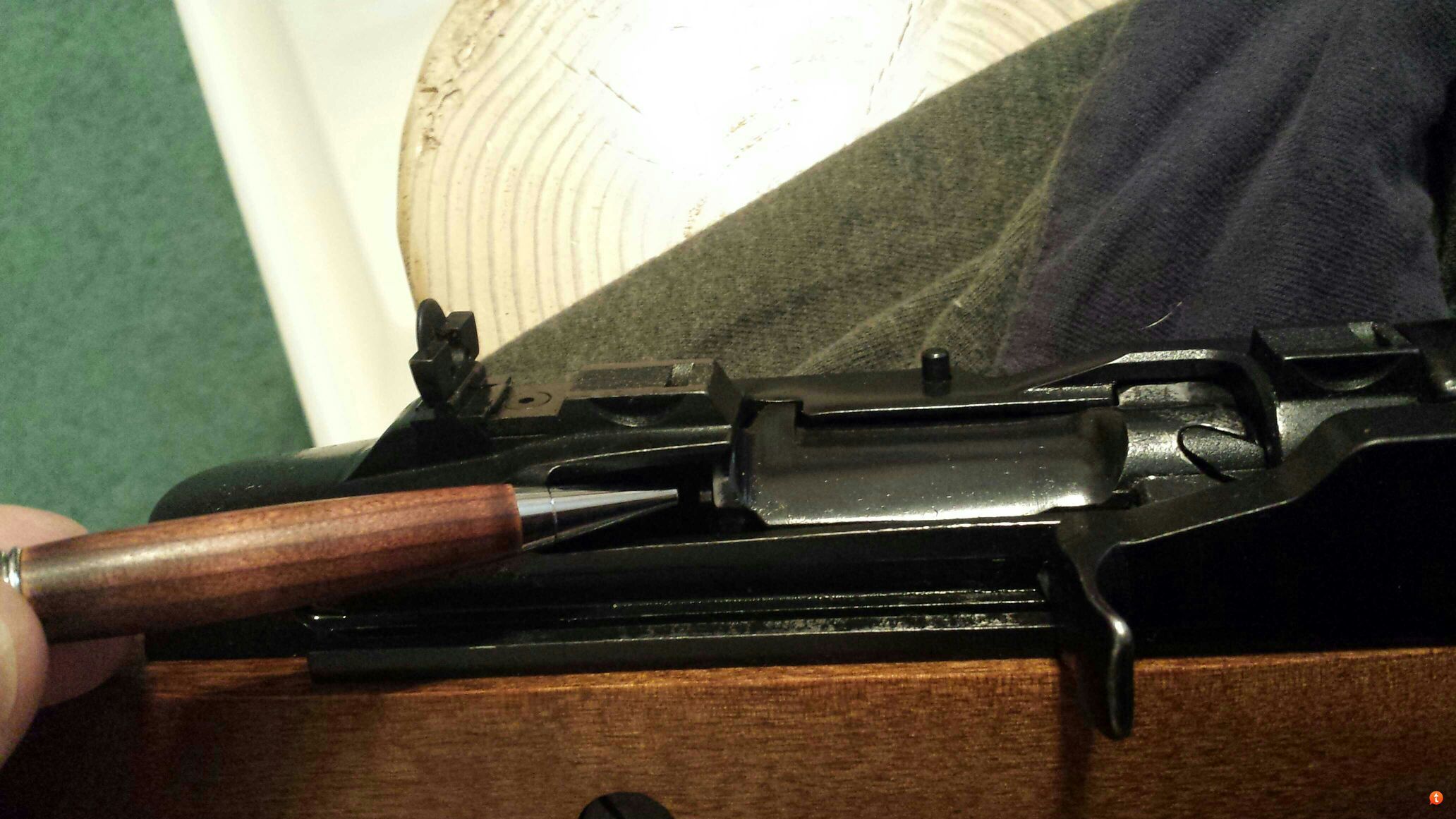 Where pen is pointing you can see the blueing rubbed off. I can color it with sharpie and when I force bolt open it rubs color off.

Oh. I got ya. I'd have called it a bolt carrier. I had a mini 14 ranch but got rid of it after the rear sight just fell off.

Problem is I cant sell it like it is. This gun came in a 5 or 6 gun deal from a guy. All others are lever actions and are like new. This gun is in great condition except it wont eject.

Replace the extractor and if that doesn't fix it call Ruger. Unless you are certain its not cycling all the way. Then may be a gas problem. I believe they use a short stroke. If there isn't enough gas to push out the piston with enough energy the bolt carrier will not go all the way. I dont know much about them. The only rugers I own are rimfire.

Ya its not extractor. The bolt wont open all the way. It is in a bind. I called Ruger and they told me to send it to them and it could be 6 months before I got a reply and my gun back. Obviously that will be a last resort. Took to a gunsmith and he pretty much said send to Ruger. Others want $100 just to look at it before they order parts and then arent 100% sure until it gets torn down trying to fix myself before I go that route.