As if our armed forces don't have enough on their plates choosing a new rifle.

Only change needed to run it in existing 5.56mm weapons is a new barrel. 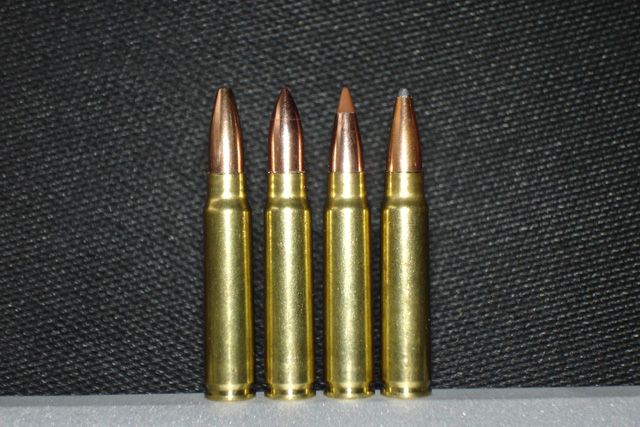 Four different bullets in the 6.5 MPC. Note all are seated to 5.56 OAL to run through M-16 magazines.
Image courtesy of SSK Industries

Small arms designer/developer J.D. Jones of SSK Industries has developed what may just prove to be a superior solution to the 6.8x43mm SPC (a.k.a. 6.8 SPC) and/or 6.5 Grendel (6.5x39mm) cartidges as a replacement for the 5.56x45mm NATO cartridge for U.S. military general infantry and Special Operations (USSOCOM) use. Mr. Jones is calling it the 6.5mm Multi-Purpose Cartridge (6.5 MPC), and on paper, it looks pretty good.

The 6.5 MPC page at the SSK Industries website mentions that they've fired a 107-grain SMK round at 2400 fps out of a weapon with a 12"-barreled CQBR-type upper receiver and that effective engagement range is 300+ yards. With longer barrels, the distance is increased.

So, why the 6.5 MPC instead of the 6.8 SPC? Ease and cost of conversion (weapons conversion), ammo capacity, and ammo weight (ammo carry capacity at a given load weight). The 6.5 MPC utilizes standard AR-15/M16/M4/M4A1 magazines and bolts, and will function in both the SOPMOD M4/M4A1 Carbine and belt-fed FN M249 SAW/LMG, provided you switch out the barrel(s). No further modification is reportedly necessary. Mag capacity for the 6.5mm MPC is 30 rounds (although you might still want to down-load it to 28, as many do with 5.56mm ammo for reliability purposes). The 6.8mm SPC doesn't stack properly in standard 5.56mm M4/M4A1 mags, and the magazines that have been developed for it limit ammo capacity to 25 rounds, as opposed to 30 rounds, so the 6.8 SPC mags will fit inside current military mag carry pouches. You can also use 5.56 NATO stripper clips to load 6.5 MPC rounds into the mag. At present, there are no 6.8 SPC stripper clips.

The 6.8 SPC cartridge weighs approx. 40% more than the 5.56mm NATO cartridge. That, combined with the fact that 6.8 SPC mags are made of steel instead of aluminum (making the magazine roughly twice as heavy), means that the infantry warfighter or Spec-Operator will be able to carry less rounds of 6.8 SPC vs. 6.5 MPC or 5.56 NATO.

DefenseReview recommends that you read Stan Crist's article on the 6.5mm Multi-Purpose Cartridge in the #44 issue of Special Weapons for Military & Police (SWMP) magazine. That issue has a photo of a U.S. Ordnance M60E4/MK43 Mod1 Commando "light machine gun series" GPMG (7.62x51mm) on the cover, and the article is titled "SSK 6.5mm MPC: Multi-Purpose Cartridge delivers bet-your-life performance." While SSK Industries Website indicates that they developed the 6.5 MPC round at the behest of one Brian Hormberg (USMC), it should perhaps be noted that Stanley Crist mentions in his article that he wrote about his own idea for a 6.5mm assault rifle cartidge in the #36 Issue of Special Weapons for Military and Police. Mr. Crist called his cartridge the 6.5mm Standard Combat Cartridge (6.5 SCC).

Bottom line, if the 6.5 MPC proves reliable in the AR-15/M16 and SOPMOD M4/M4A1 platforms, is combat accurate out to realistic assault rifle engagement distances, and the AR-type upper receivers and barrels hold up to full-auto fire at high round count, then it may just be the ticket for the 5.56's replacement (and thus a better answer than the 6.8 SPC or 6.5 Grendel) for infantry assault rifles and carbines. Time, money, and politics will tell.
Click to expand...

The cartridge inventors page on this new cartridge.

Wouldn't the new heavier bullet need more powder to push it? I would think it would, but I am buy no means an expert in the field. Why wouldn't they go with some thing like the 308? I'm just asking, this is by no means an attack on the cartridge or the people that made it. I just think the 6.5 in the 223 case would not be as efficient as the 223.
F

I never understood why when they originally considered the M-16, they didn't just go with the .243. Stoner designed it in .308 - seems like it would have been natural. They could have also met their "fast dinky bullet" fetish by loading the 6mm with 55 gr spitzers. They're faster than a .223 coming out of the .243. Plus, since the M60 was the machine gun at the time, brass would not have been an issue.

I still think that fitting the cartridge around the platform is bass-ackwards. First consideration should be what works for the infantryman in the field. Everybody else should adapt. Of course, that'll never happen.
M

.308 is fine for long range work, but is way more powerful than the average infantryman can use in most situations. The weight of it reduces combat load, and the size limits mag capacity. The recoil also lowers the rate of effective fire - ask someone who's shot both 5.56 and 7.62x51 rifles in FA: see which caliber was realistic in FA. It also requires a heavier weapon.

This 6.5 has me interested, but it sounds like they're pushing it awful hard. They're loading nearly twice the weight and keeping velocity close to 5.56 levels! Me thinks barrel life is going to be somewhat short...
F

Don't know about life in the FA - as an infantryman, I experienced both rounds in the field. I keep hearing about how unmanagable the 7.62 is for the average soldier, but we preferred it to the 5.56. From what I understand, it's still the preferred weapon for special ops soldiers in the field. I can understand the argument about the rifles being heavier, but every rose has its thorn.

I think I'd rather carry something a lil bit heavier and have the extra power. Although I will say I do love my .223/5.56.
M


FM-793 said:
From what I understand, it's still the preferred weapon for special ops soldiers in the field.
Click to expand...

I wouldn't say that. For long shots, yes. For kicking down doors, the 5.56 seems to be the caliber of choice.

I wouldn't say that 7.62 is too much for the average soldier, but that kind of power level became standard world-wide back in the days of cavalry that still rode horses. We don't need to shoot horses much these days, so...
You must log in or register to reply here.
Share:
Facebook Twitter Reddit Pinterest Tumblr WhatsApp Email Share Link