So I picked up a Savage TR-10 this weekend at the show. Under $500 (+tax) and out the door. It's a 20" .308 with a bull barrel, Accutrigger, Accustock and threaded barrel end with endcap/thread protector. I'd post a pic, except right now it's plain jane out of the box, so there's nothing to show.

The 0 MOA rail it's supposed to come with wasn't in the box - research online indicates this may be a more common occurrence. A call to Savage got one shipped out today, along with a conversation that the number of calls about this is on the rise, making them think a distributor is screwing up somewhere.

I'll be adding a Nikon BDC scope (I have another thread on this, asking for advice between two choices), a standard sling and a bipod, and that's it, except for a Brownells Short Muzzle Brake: 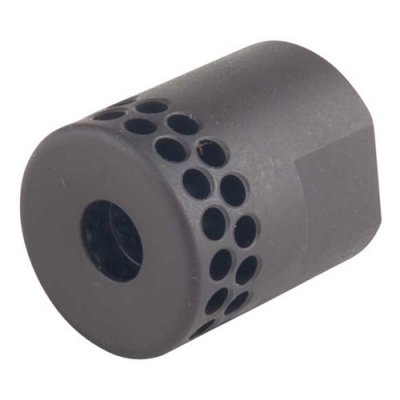 I went with this one because I want to keep the rifle short - I like the "brush gun/scout rifle" aspect of it vs. a long-barreled long-range .308 (I could see myself getting a 26" platform next with a 20 MOA scope base).

As the parts come in and I get everything thrown together, I'll come back and add pics. Now the only thing I've got to find is the case I want to throw it into. Anyone have something similar they'd like to give advice on?

Why go with a long barrel .308 also? I believe you will be more than happy with the accuracy of this rifle. If you need more range step up in cartridge not barrel length. A couple fps won't make a huge difference.

Good rifle choice. I am a die hard Savage man myself. They will shoot.

Dawico said:
Good rifle choice. I am a die hard Savage man myself. They will shoot.
Click to expand...

My first rifle was a 110 in .243. I could drive tacks with that thing... and took my first hog with it. Remember it fondly, having sold it when I moved from Texas to California (then back a few years later and here ever since).
You must log in or register to reply here.
Share:
Facebook Twitter Reddit Pinterest Tumblr WhatsApp Email Share Link