All it says is

Top on the exhaust

Has an ss on the right side by the bottom of the trigger.

It's all stainless steel

Is it any good.

They specialize in the 1911 and have a Springfield sub-forum.

I am not familiar with the 45 super as I have never shot or handled one. I would be careful of shooting a super in a 45ACP barrel though. 45 acp is a low pressure round and the super is a high pressure round, I think.
B

The guy has been shooting regular .45acp in it. I knw that if you put a softer spring in it it will shoot the apc just fine.

I have posted on some 1911 forums and they have not seen one like it.

Brandon, from my guesstimates of what I found, the v10 is supposed to mean vented and 10 hole I believe...not sure if the slide is vented by the pics you posted but that is is what it looks like from the information I can find....outside of that, it looks like what they called a custom in that it was originally configured for the .45 super but has probably been modified to run the acp without issue....from some information I have found it was said to replace the recoil springs if going from super to acp, since acp is more plentiful that has probably been done but, if not, you could suffer the consequences if just going ahead and running acp and accepting the spring has been changed but a spring can't cost that much, just change it out and be done with it....so, replace that plastic piece and the spring and run with it....or let me have it.. 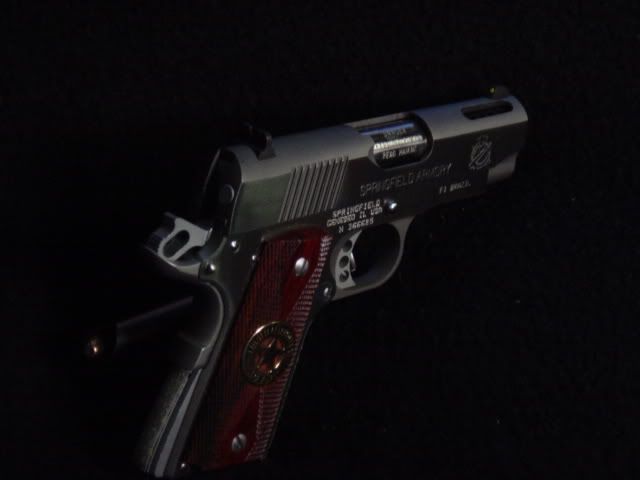 The above post is my V 10 ultra compact. As blacksunshine said,it has ported (10) holes in the barrel, and slots cut into the slide.
N

The v-10 is repersenting the slots and the holes cut in the slide sir a built in compensator as it were alot of companys do it. You have a very fine 1911 in your hands.