Hello. A good while back I got the opportunity to buy a clean 1980 blued 9mm Hi Power with the original checkered walnut stocks. The gun was of the classic style and with the "beer can" adjustable rear sight.

I shot the pistol as was for a while but I have never warmed up to these really "high-profile" sights. Still, in the approximately 350 rounds fired, they didn't work loose as has sometimes been the case in the past. What was troubling was for the hammer to sometimes fall to the half-cock position, which began happening more often as rounds were fired. Without looking I figured it was either the sear spring or the sear and hammer notch for full-cock engagement was not true.

With (too many) other projects going on, I cleaned the pistol and put it back in the safe for a few weeks.

Eventually I got back around to this Hi Power.

The first thing I did was to detail-strip the gun and saw that there was a visible "bend mark" on the sear spring! In other words, it appears that someone managed to nearly fold the thing in half while attempting to alter its tensioning properties. Frankly, I'm surprised that it didn't snap. I've only seen this one other time and that's what happened.

I tossed it in the trash. I don't know if it would have ever actually broken but the tension it applied to the sear didn't feel adequate or "right" based on fooling with these things for decades and proof was the hammer falling to half-cock! Besides, I'd always have that nagging feeling, that worry that the darned thing would snap. I immediately replaced that sear spring with a new one from my parts bin.

Feeling the sides and edges of the sear, I felt two small burrs on one side which were removed with a fine stone. The hammer/sear engagement seemed even and completely across their widths.

The inside frame walls at each end of the sear were smooth with no major tool marks, burrs or gouges. Still, using 600 and then 2000 grit wet-to-dry sandpaper and an ice cream stick, I very lightly polished these areas.

I smoothed the hammer strut a bit and reassembled. (The magazine disconnect had already been removed so I was saved that part of the "remodeling job". (Why I didn't think of going ahead and bobbing the hammer spur at this time, I flat don't know.)

After reassembling the gun, I dry-fired a few times and then let the slide slam shut on an empty chamber 3 times in a row. With the new sear spring in place, the hammer did not fall. Visually checking hammer/sear contact, engagement remained full; i.e.: the sear had not risen any. While here, I checked the original small thumb safety, pushing it upward with my thumb. Pressing the trigger firmly but not as hard as I possibly could, I observed absolutely no movement of the sear.
The trigger pull was quite clean, but heavy. I measured it right at 8-lbs with a friend's trigger-pull gauge. While I would prefer it about 3 to 4-lbs lighter, if I can only have "clean w/no grittiness" vs. light, I'll sacrifice the latter. In my experience, having both is best, but a "clean" pull works best for me if I can only have one!

Checking my stash of Hi Power barrels, I picked 3 factory ones and 2 BarSto's. I then retrieved an extra Mk III slide assembly I had picked up a few years earlier. (Don't really even remember the details on that.)

The slide fit the frame nicely. One of the BarSto's would work w/o fitting so I took it and the factory barrels to the range. All of them had been "throated", i.e: straight not humped feed ramps unless the barrel came with the straight ramp already. I could not tell by looking which, if any, had and darned sure didn't remember.

Cutting to the chase, the BarSto grouped nicely and was reliable but POI vs POA at 15 yards was 3" high and right at 4" to the right; not acceptable. POA vs. POI was closer with the factory bbls which did not fit as snugly as the BarSto, something usually to be expected as BarSto's almost always have to have at least some fitting if not the "drop in" versions. (Usually, it has been my experience that getting one to just drop in w/o any fitting is well under 50% of the time. I guess I got "lucky" this time.)

As luck would have it, the last factory bbl I tried was the one that came with the Hi Power. Despite being used with a different slide, it provided POA that very closely matched POI with standard pressure 124-gr. ammunition. 147-gr. loads at just under 1000 ft/sec hit just under 2" above POA at 15 yards. Group sizes have been acceptable, most at 3" or so at 25 yards from a rest with loads this one "likes" at a little less.

As expected, the darned hammer bit me. 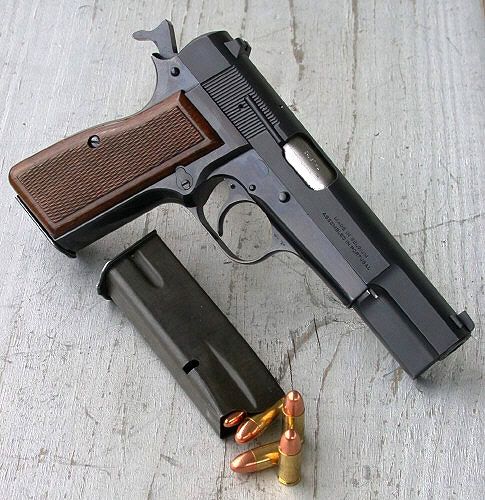 The little bloody "pirahna bite marks" between my thumb and trigger finger reminded me that I needed to perform my usual "bob job" at the second lateral serration to eliminate hammer bite. (This works fine for me. Other approaches are sometimes necessary for Hi Power shooters.) Did it with the dremel tool and a cutting wheel, then cleaned up and reshaped the edges with stones and reblued. (Used microwave heated "cold blue" on the degreased and slightly heated hammer spur.) The job was satisfactory, not as beautiful as a professional hot blue but plenty good enough for me and probably something that would not be noticed by all that many folks. In any event, the price was right and when the gun eventually needs rebluing, the hammer will receive the hot blue then. 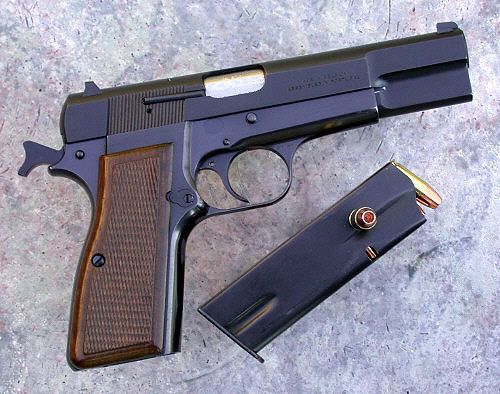 The "finished" Hi Power after its small "remodeling job" along with cleaning up the stocks and apply a couple of coats of Tru-Oil.

So, without too much effort, I wound up with sort of a forged-frame "Standard" Mk III although this one still has the small, classic, single-side thumb safety. I may or may not change it out, depends on mood mainly as I envision using this one mainly as a range gun and usually with standard pressure ammunition, though it does have the Wolff conventional 18.5-lb recoil spring. I left the mainspring at the factory standard 32-lbs. Other Hi Power fans sometimes prefer to use a bit lighter but I tend to stay with this weight as I think it helps should one decide to use hotter loads in his Hi Power.

This gun has not been carried or shot other than on the firing range but checking my ammunition notes shows that it has fired something over 1080 rounds (not all at once) without malfunction while in its current form.

The most I could stand shooting it and not cleaning was 450 rounds so I cannot say from experience if it will go 1000 shots w/o malfunctions if not cleaned; I really do not care as I don't envision not cleaning after each range visit or such an "extended" defense shootout that lack of cleaning became an issue!

I like the gun as now set up and plan to shoot the fire out of it. Not quite, but it was sort of like getting a new Hi Power.