Our Hero is Wearing Himself out...

He's proving to be the second coming of Jimmy Carter!

Barack Obama 'too tired' to give proper welcome to Gordon Brown

Barack Obama's offhand approach to Gordon Brown's Washington visit last week came about because the president was facing exhaustion over America's economic crisis and is unable to focus on foreign affairs, the Sunday Telegraph has been told. 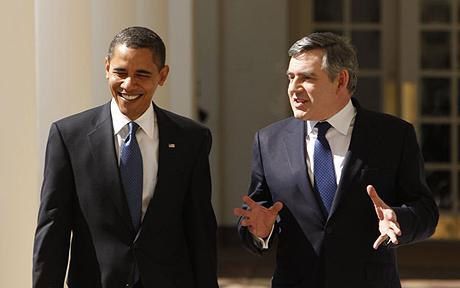 
Sources close to the White House say Mr Obama and his staff have been "overwhelmed" by the economic meltdown and have voiced concerns that the new president is not getting enough rest.
British officials, meanwhile, admit that the White House and US State Department staff were utterly bemused by complaints that the Prime Minister should have been granted full-blown press conference and a formal dinner, as has been customary. They concede that Obama aides seemed unfamiliar with the expectations that surround a major visit by a British prime minister.
But Washington figures with access to Mr Obama's inner circle explained the slight by saying that those high up in the administration have had little time to deal with international matters, let alone the diplomatic niceties of the special relationship.
Allies of Mr Obama say his weary appearance in the Oval Office with Mr Brown illustrates the strain he is now under, and the president's surprise at the sheer volume of business that crosses his desk.
A well-connected Washington figure, who is close to members of Mr Obama's inner circle, expressed concern that Mr Obama had failed so far to "even fake an interest in foreign policy".
A British official conceded that the furore surrounding the apparent snub to Mr Brown had come as a shock to the White House. "I think it's right to say that their focus is elsewhere, on domestic affairs. A number of our US interlocutors said they couldn't quite understand the British concerns and didn't get what that was all about."
The American source said: "Obama is overwhelmed. There is a zero sum tension between his ability to attend to the economic issues and his ability to be a proactive sculptor of the national security agenda.
"That was the gamble these guys made at the front end of this presidency and I think they're finding it a hard thing to do everything."
British diplomats insist the visit was a success, with officials getting the chance to develop closer links with Mr Obama's aides. They point out that the president has agreed to meet the prime minister for further one-to-one talks in London later this month, ahead of the G20 summit on April 2.
But they concede that the mood music of the event was at times strained. Mr Brown handed over carefully selected gifts, including a pen holder made from the wood of a warship that helped stamp out the slave trade - a sister ship of the vessel from which timbers were taken to build Mr Obama's Oval Office desk. Mr Obama's gift in return, a collection of Hollywood film DVDs that could have been bought from any high street store, looked like the kind of thing the White House might hand out to the visiting head of a minor African state.
Mr Obama rang Mr Brown as he flew home, in what many suspected was an attempt to make amends.
The real views of many in Obama administration were laid bare by a State Department official involved in planning the Brown visit, who reacted with fury when questioned by The Sunday Telegraph about why the event was so low-key.
The official dismissed any notion of the special relationship, saying: "There's nothing special about Britain. You're just the same as the other 190 countries in the world. You shouldn't expect special treatment." The apparent lack of attention to detail by the Obama administration is indicative of what many believe to be Mr Obama's determination to do too much too quickly.
In addition to passing the largest stimulus package and the largest budget in US history, Mr Obama is battling a plummeting stock market, the possible bankruptcy of General Motors, and rising unemployment. He has also begun historic efforts to achieve universal healthcare, overhaul education and begin a green energy revolution all in his first 50 days in office.
The Sunday Telegraph understands that one of Mr Obama's most prominent African American backers, whose endorsement he spent two years cultivating, has told friends that he detects a weakness in Mr Obama's character.
"The one real serious flaw I see in Barack Obama is that he thinks he can manage all this," the well-known figure told a Washington official, who spoke to this newspaper. "He's underestimating the flood of things that will hit his desk." A Democratic strategist, who is friends with several senior White House aides, revealed that the president has regularly appeared worn out and drawn during evening work sessions with senior staff in the West Wing and has been forced to make decisions more quickly than he is comfortable.
He said that on several occasions the president has had to hurry back from eating dinner with his family in the residence and then tucking his daughters in to bed, to conduct urgent government business. Matters are not helped by the pledge to give up smoking.
"People say he looks tired more often than they're used to," the strategist said. "He's still calm, but there have been flashes of irritation when he thinks he's being pushed to make a decision sooner than he wants to make it. He looks like he needs a cigarette."
Mr Obama was teased by the New York Times on Thursday in a front page story which claimed to have detected a greater prevalence of grey hairs since he entered the White House.
The Democratic strategist stressed that Mr Obama's plight was nothing new. "He knew it was going to be tough; he said as much throughout the campaign. But there's a difference between knowing it is going to be tough and facing the sheer relentless pressure of it all."
D

I don't know how he can be tired. Wednesday Night parties, Superbowl parties, vacation in Hawaii before he took office, sneaking out of the WH on Friday to visit his kids at school, etc..

That's what happens when you have never been in charge of anything. No, he did not run a campaign either, David Axelrod took care of that. All Obama had to do was stay on message, read the teleprompter, and throw a few people under the bus (his grandmother for starters).

So what about families across the nation that have 24 hour routines with their kids? Give me a break, get off your ass, suck it up, down some coffee, and start kissing PM ass. Millions of Americans do it on a daily basis.
J

Didn't he spend a couple years busting his hump to get the job?

I think eventually most of the Bush bashers out there will realize W wasn't so bad after all.
3

I was just happy to hear he was actually in Washington for a few days!!! So far most of his time has been spent on Air Force One....did he add his obama logo to AFO yet??
But he really has been busy, heard from Rush that obama has spent more money in 6 weeks than all of the previous Presidents combined.....that takes a lot out of ones self!
Anyone who drinks pepsi doing a boycott? Just curious.
R

The Dems have a mandate from the people and are hell bent on ramming as much down our throats as possible in as short a time as possible before the rest of the country wakes up and realizes the mistake they have made.
T


95P38RR said:
I think eventually most of the Bush bashers out there will realize W wasn't so bad after all.
Click to expand...


I'm already thinking that the Bush era was "the good old days" back when things sorta made sense!

Or something thereabouts.
M

Some times when I get really ticked off with a subject like this I wax poetic.

Hale to the chief our leader at hand.
Obama, Obama, he’s the man.
He’ll pay your bills and buy your house.

No new taxes he said to you and me
But nothing said about the electric company.

He won’t take your guns, not today.
Just the ammo so you can’t play.

Never mind what we do at night.
We the government knows what right.

Break a thumb or your noise.
This won’t qualify for my insurance you know.

All is great, all is good.
With King Obama in the neighborhood.

I am an American can’t you see.
My right to guns protects my liberty.

When did you upon that hill,
Decide my fate with your BS bills

How do you know what’s right with me?
Did God give you some special sight to see?