Am I correct that 125gr. bullets in front of a heavy charge of powder tend to cause cracked forcing cones, but 140gr. or 158gr. bullets with heavy loads are not a problem?

Does anyone have a reference on this? Thanks for any help.

Nobody here is a .357 magnum aficianado?

I have done searches, and the cause varies by the reporter. Some report that the high velocity 125gr. "batters" the forcing cone. </p>
A differing explanation claims that bullet length is the critical factor. Purportedly, 110gr. and 125gr. jacketed bullets (why only jacketed bullets?) are short, and these cause gas cutting when the bullet jumps the cylinder gap.

Another points out that K-frames require that an angular cut across the lower portion of the forcing cone is required to properly fit the barrel to the lighter frame. This results in a weak area that is the location of the vast majority of forcing cone splitting, and 125 gr. bullets seem to be the most frequently used load in pistols with split cones.

There are a few reporters who say they have shot thousands of 125gr. factory and reloads out of their k-frames without any ill effects.

I was hoping that someone might have a report from a reliable testing, or manufacturing, or reloading, or whatever (reliable) source, that I might read.

Perhaps the .357 mag is not a good choice of pistol?

There were issues with the .357 and K frames. Just too much cartridge for this size frame. I believe S&W came up with the beefier L frame for this reason.
I don't recall what what the issues were, but I would suggest shooting reduced loads.
Sorry I can't help you more.

Here is a picture. 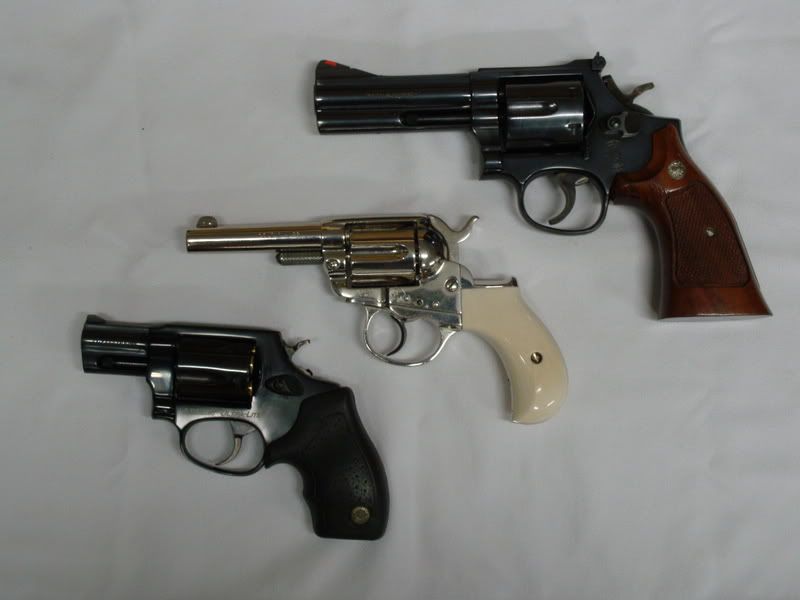 Don't have a K frame .357, but as I understand it, the gas cutting with light bullet .357 loads was one of the reasons S&W brought out the L frame series. Wasn't an issue with the forcing cones, but the topstrap, if I remember correctly.
C

Appreciate the replies. Thank you, gentlemen

My understanding as 357 Maximum shooter is that the problem is very similar to my rugers and the max. It is the ball powder and pressure at the time the bullet makes the jump acress the cylinder to the forcing cone. With the bigger bullets the pressure is down lower and the powder is more consumed. Also the k frame forcing cone is quite thin so you just exceed its limits.

CowDog said:
Am I correct that 125gr. bullets in front of a heavy charge of powder tend to cause cracked forcing cones, but 140gr. or 158gr. bullets with heavy loads are not a problem?

Does anyone have a reference on this? Thanks for any help.