I had a friend bring out a M-1 carbine a few days back. It was a Universal, and we shot about 100 rounds through it. I really enjoyed shooting this gun, and am considering buying one.Since then, I went looking on the internet for information about these guns, before I put down any hard earned cash for one. So far, it seems that Universal is held in fairly low opinion by most M-1 shooters, for a variety of reasons, the only ones that made sense to me was that they tend to be unreliable and hard to repair. Other new makes were also talked down. It appears that Auto Ordinance is a problem gun, too.I've decided that I should get a military version of the gun. I want a reliable gun that will hit 4 – 5'' at 100 yards. From what I gather, this is not asking too much.Fact is, I don't give a hoot what brand the gun is, or if it's made out of mixed parts, as long as it is a reliable and reasonably accurate gun. It's a fact that I don't have any idea of how to know what I'm getting. I know about taking a loaded shell and seeing if it will pass into the end of the barrel, but this seems like a pretty sorry way of telling whether the bore is worn out. Does a good military bore look any different than any other gun? Do any of you good folks know what things I should look at, and what those things should look like in a good military rifle? What parts seem to give the most trouble? Can I get what I want for $750, or so? Should I give up this idea and get a new make of rifle? I thought the Universal I shot was accurate enough, and fun, but if they break down a lot, it seems like a waste of money. Any help is appreciated. cd
Edited because I didn't write this as a single paragraph, and this system seems to want to make it that way. Let's try one of these smilie things: Ah hell, forget it.
I

Check out the CMP store. I bought an IBM/AO when I was there this summer for the national matches.

There is a lot to be learned about these rifles and unless you really know what you're doing, don't buy it for collector value but rather as a shooter or relic.

I've only put a few rounds through mine and probably want to have some work done on it. They gauged the bbl for me at the store and I handpicked the one I wanted. I got one with a nice match for the upper and lower wood. Finish could have been better, but I wanted an IBM. They don't come with oiler/sling from CMP, so you'll have to get that someplace else. Fulton has a lot of M1 Carbine parts as well as new rifles. People who know said that I got a good one and at a good price. Not quite sure why I wanted this rifle, maybe I watched one too many WWII movies as a youth.

The spent shells eject straight back and ping me in the forehead, so I need to have that fixed. Otherwise it seems to be a sweet shooter. Best of all, it was made Jan-Mar1944, so this rifle may have some history. If you want to use it for any carbine matches, then you'll need to buy a milsurp with an original receiver, a new AO or Fulton won't be allowed.
P

I'll just tell you about my Universal (Iver Johnson) and let you draw your own conclusion.

I saw the rifle for sale on another forum and jumping in head first, I bought it without researching it. The first time I took it out I had problems with it feeding correctly. When it did feed correctly, it slam-fired at least twice per magazine. Before you buy a Universal, you need to check and make sure the firing pin can't engage before the bolt is locked. This is one of their most famous claims to fame and probably why Iver Johnson is out of business. WITH THE RIFLE UNLOADED AND NO MAG IN PLACE, pull the bolt back, pull the trigger and slowly start closing the bolt. If the firing pin drops before the bolt has closed AND ROTATED TO THE LOCKED POSITION, you have a rifle that can fire with an un-locked bolt. If you looked on the web much, you saw some pics of the results of this situation. Whoever is standing to the right of the rifle will be lucky to escape with their life or eyesight. It will often blow the entire right side of the stock off under the action.

I've heard from guys that had these rifles and they had no trouble so I can't advise against buying one. I can advise that before you put a penny on one, that you take it to a gunsmith and get a complete physical performed on it. A bad Universal doesn't just fail to fire, fail to eject, or fail to feed. A bad Universal will kill someone.
C

Thank you for your replies.Iratollah,I have bookmarked the CMP and am reading up on them. The price is attractive and they have been &quot;tuned up&quot; a bit. This seems like a good option. When I get off shift, I'll spend some time on the site.Hunter,I didn't see the site you mentioned, and have not had enough time to go beyond the complaints that Universals tend to be unreliable. Thanks for the heads up. I hadn't thought about any of them being potentially unsafe in their camparatively new state of manufacture. Some good, but a high enough percentage of bad to remove confidence. The question remains, however. What do I look for if I run onto one for sale in the classifieds or a gunshow or even on this forum? (I realize the CMP may relieve me of having to look around a lot, but losing some ignorance is a good thing.) Thanks,cd
Edited in an attempt to restore paragraphs/punctuation, as was typed in the original message. Sorry....I'll eventually get this figured out.
P

Here's a link that doesn't show the results of a stock explosion, does show you what to look for if you're going to buy a Universal M-1. I believe Universal made 3 Generations of the M-1. The Generation 1 is generally considered safe since they have the original GI bolt and receiver design. When Universal came out with their Generation 2, they have a re-designed receiver that removed the safety features that prevent Out of Battery discharges and a crappy bolt. While a Slam Fire is dangerous to anything in front of the bore, an Out of Battery dischage is dangerous to everyone within 50 feet of the shooter (including the shooter).

Some of the pics in this link showing the portion of the reveiver that restrains the firing pin may be a little confusing but if you hold a it in your hand, it's obvious. If I were going to buy a Universal, it would definitely have to be a Generation 1 rifle. Period.

I have a later version Universal with twin springs and a WWII Underwood. I would stay away from the Universals. They aren't worth the risk of getting a bad one.

A couple of days ago, aimsurplus had an IBM with Winchester barrel on their site. I don't see it today. Give them a call.

A couple of folks asked what the differences are between the WWII M1 Carbine and the later copies that came out. So I did a comparison of what I have. A 1944 Underwood and a 1970's Universal. Universal made several changes to the design and all were bad. They use the same mags, the Universal has no bayo lug.

The Slide was redesigned to have a cut in it where the bolt lug can show thru. Very stupid, it just makes it easier for dirt to get into the action. The cut was also a weak place in the slide and many have cracked and broken and there are no spare parts to be found. 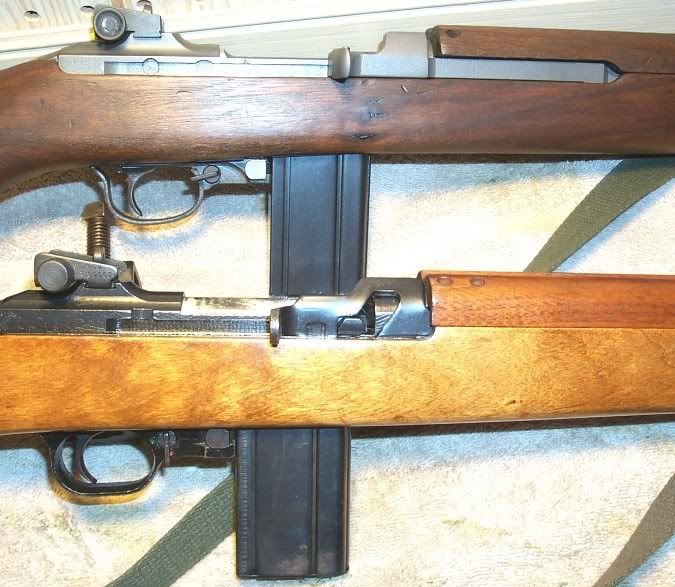 A view of the twin springs of the Universal, I guess they thought more was better. It's not, it adds parts to break and is a bitch to take apart and reassemble until you do it a few dozen times.

The WWII Carbine has one spring and it easily pops out and back in. The Universal has to have a cross oin removed that allows the two long rods to move back into the mag well thus allowing the springs to be removed. Now imagine putting them back in... you have to hold the rods forward, with a compressed spring around them while sliding the cross pin back into place. Real smart... try that in a muddy field in the cold rain.

The trigger group slides off toward the rear. 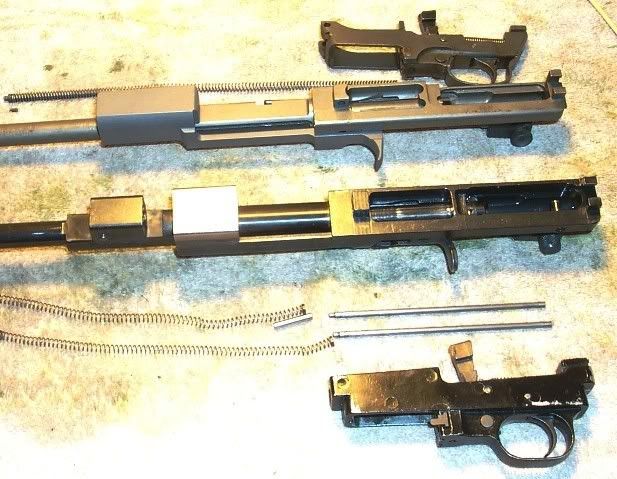 The trigger groups are very similar. That hammer spring is a serious bitch to get out and back in. This is the one place an improvement would have helped but they didn't change anything. 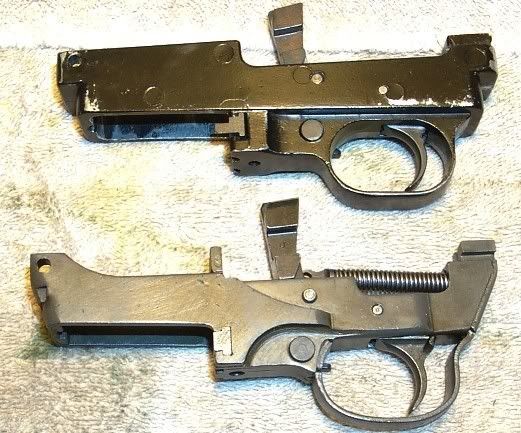 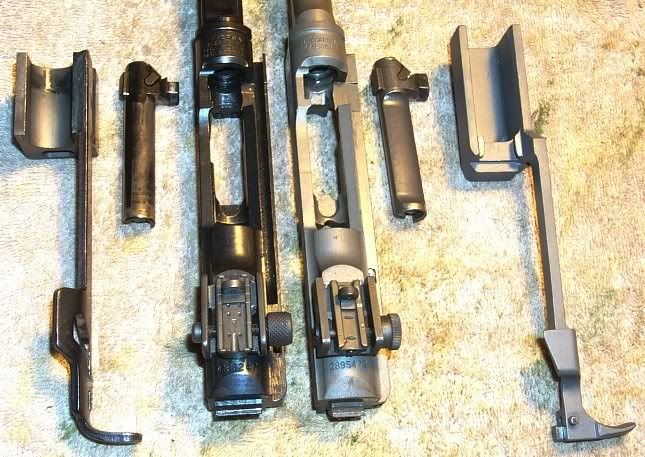 The different gas block and piston designs. The Universal uses a pin to keep the piston in place, the WWII used a treaded nut. You can see the powder residue that leaks around the Universal piston. You can also see the pin at the back of the receiver that can be pushed in and acts as a "bolt hold open". The WWII models just used a catch on the charging handle part of the slide.

The far end of the gas blocks. 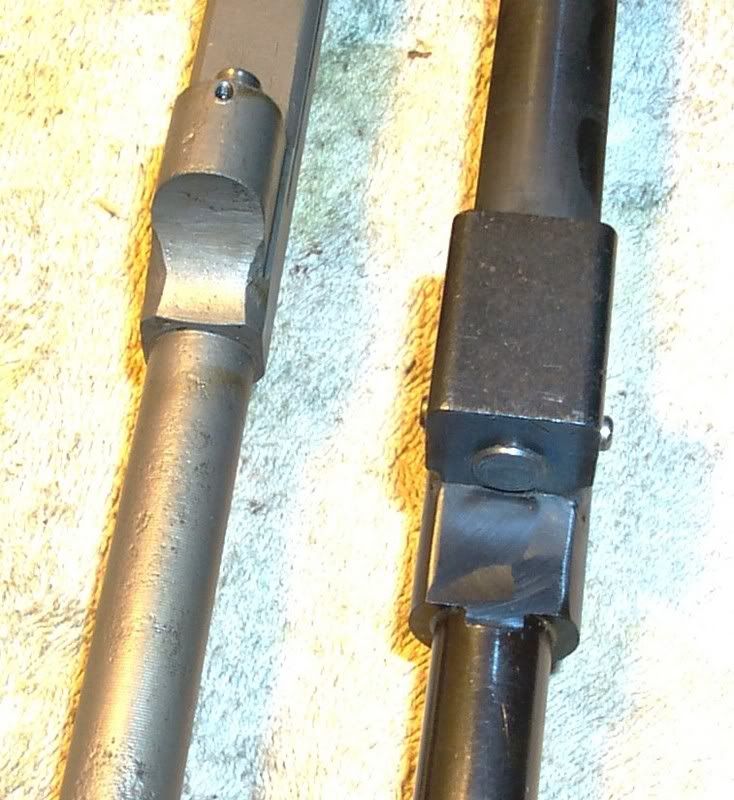 The same bolt tool works on both bolts... and YES, you want to own a bolt tool. Hours of swearing and crawling around on your hands and knees looking for the springs and bits can be avoided for $29.95. Ask me how I know. 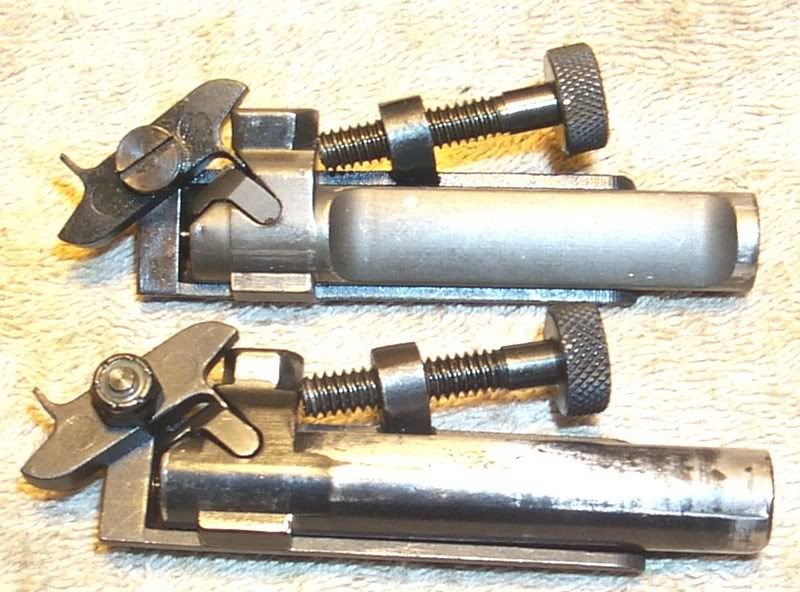 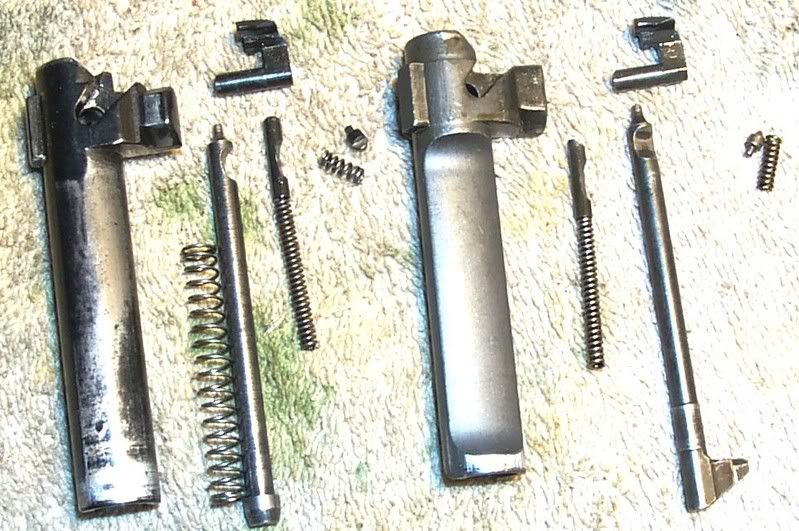 Closer look at the pin used for holding the bolt open. 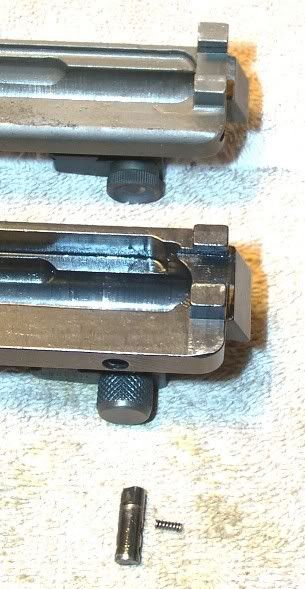 Closer look at the pistons. 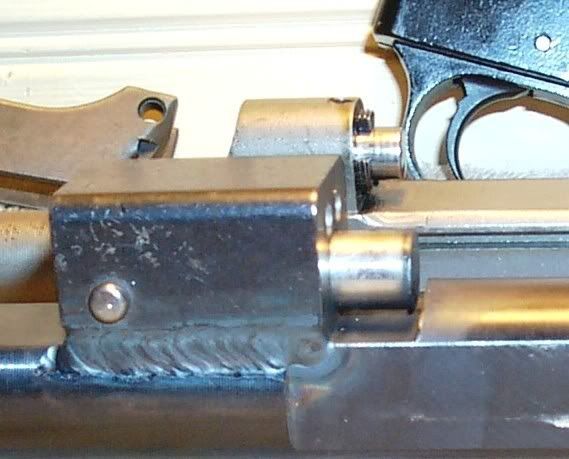 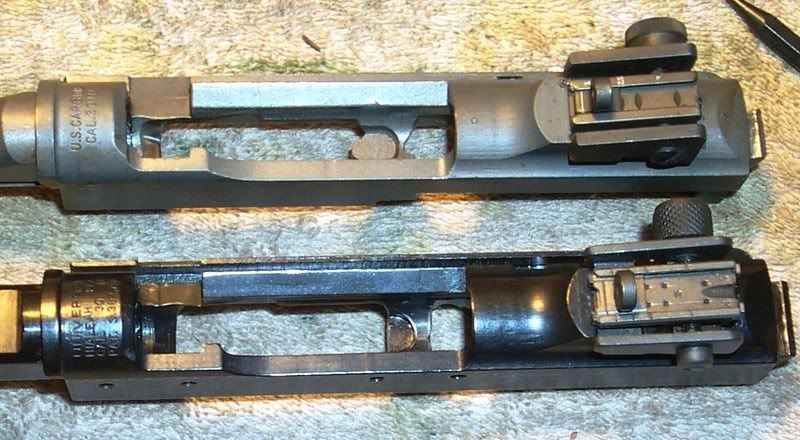 Great post TA. I'm bringing my rifle and a six pack over to your place for some gunsmithing.
T

That WAS the extent of my gunsmithing!

What is yours doing wrong?
C

Primitive Hunter,
Thank you for the link. I'm convinced, for sure.</p>I suppose I should alter my original question and ask: Are there any parts in GI Carbines that are typically worn out, or prone to breakage? I would definitely check the bore and the operation of the action for obvious problems.
Again, my thanks. You've gone out of your way to help (and maybe save my hide), and I appreciate it.
cd
C

Texas Armadillo,
I've been away for a few days, and just returned and checked out the forum. Holey Moley! You're good. That is one beautiful presentation. I see that there's a lot to learn, and I will shorten the curve by sticking with a GI Carbine.
I like to see what I'm buying before I lay down the cash, and will likely buy as locally as possible. Having a reliable gun is one of my original requirements. Having the same innards from gun to gun seems like the reasonable thing to do.
My Thanks to you for an absolutely outstanding demonstration.
cd
You must log in or register to reply here.
Share:
Facebook Twitter Reddit Pinterest Tumblr WhatsApp Email Share Link