TORONTO — Acclaimed jazz and rock guitarist Jeff Healey was remembered Sunday as a musician of rare ability who had a wicked sense of humour and a generous nature as fans and bandmates mourned his death at age 41, following a battle with cancer.
Bandmates of Canadian rock and jazz legend Jeff Healey were among those shocked by the news of his death Sunday.
Healey died Sunday evening in a Toronto hospital surrounded by family and a bandmate, Colin Bray.
Bray, the bass player with Jeff Healey's jazz Wizards and the frontman's long-time friend, said he and many others expected the guitarist to rally from this latest illness.
"I don't think any of us thought this was going to happen," Bray said in a telephone interview. "We just thought he was going to bounce back as he always does."
Healey had battled with cancer since the age of one when a rare form of retinal cancer known as Retinoblastoma claimed his eyesight.
Bray said Healey had been hospitalized for a week and that his advanced lung cancer made his final hours difficult.
Healey had undergone numerous operations in recent years to remove tumours from his lungs and leg.
Bray and fellow bandmate Gary Scriven remembered their frontman as not only a world-class musician but an incredibly strong person with the capacity to motivate those he worked with.
Scriven called Healey inspirational and praised the boundless enthusiasm that allowed him to continue performing live only four weeks before his death.
"He drew his strength from somewhere, I don't know where, but it spread among the band and flowed into the audience," Scriven said.
Healey rose to stardom as the leader of the Jeff Healey Band, a rock-oriented trio that garnered a Juno award, international acclaim and platinum record sales with the 1988 album "See the Light."
But Bray and Scriven said Healey's true love was jazz, the genre that dominated his last three albums with the Jazz Wizards.
Healey's guitar prowess was characterized by a unique playing-style that saw him lay the instrument across his lap.
It led him to share stages with such rock luminaries as George Harrison, Stevie Ray Vaughan and B.B. King, but Bray said jazz allowed him to exercise his other instrumental talents such as trumpet and drums.
Healey's love of jazz also led him to host radio shows on the CBC and a local Toronto station where he spun long-forgotten numbers from his personal collection of over 30,000 vinyl records.
But Bray said his "best friend" saw himself first and foremost as an entertainer and said Healey seemed to derive therapeutic benefits from playing live shows.
Recalling Healey's weakened condition at his final performance on Feb. 2 in Sarnia, Ont., Bray said Healey seemed to draw strength as the set progressed.
"At the end of it, I can't believe how much better he looked. It was like blood to him."
Healey's death came weeks before the release of his first rock album in eight years.
"Mess of Blues" is slated for a North American release on April 22.
Healey is backed on the album by the resident band at Jeff Healey's Roadhouse, the blues club he founded and named after a 1989 Patrick Swayze movie in which he appeared.
The album features two live tracks recorded in the last few months of his life.
The Grammy-nominated musician is survived by his wife Christie and two children; daughter Rachel, 13 and son Derek, 3.
Funeral and memorial arrangements have not yet been announced. 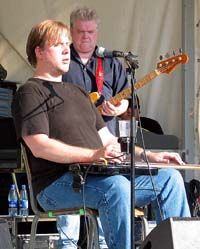 Man... that guy lived life in extremes. He lost his eyes to cancer at the age of 1 and then went on to become an internationally known musician... and a damn good one at that... Only to die from cancer in his early 40s. Damn, what a crazy life.

I just read on another forum that Patrick Swayze has been diagnosed with Terminal Cancer, now this. The "Roadhouse" Curse Strikes!!!!

Man, I was shocked to hear that about Patrick Swayze. I'm really sorry to hear that as I've always liked the guy. Man, quite a few famous people and entertainers/movie stars/singers have passed away in the last 5 years or so.
M

Rest in peace.Sorry to hear he died.
R

My wife and I danced our first dance as man and wife to "Angel Eyes". RIP Jeff, peace be with you.

HK_Fiend said:
Man, I was shocked to hear that about Patrick Swayze. I'm really sorry to hear that as I've always liked the guy. Man, quite a few famous people and entertainers/movie stars/singers have passed away in the last 5 years or so.
Click to expand...


Pancreatic cancer ain't good at all.

Not even a little bit Ray.

This is why you need to live every day like it is a gift guys. Far too many of us waste our days thinking about all of the stuff we are "gonna do".

Get off of your butt and do it!
M

I thank the good LORD every day my feet hit the floor.

murfdog said:
I thank the good LORD every day my feet hit the floor.
Click to expand...


No doubt! Every morning, I get up and check the obits to make sure I'm not in there. Life is good!