Real America story, something those in DC do not understand.

Wounded by a bomb in Afghanistan, he struggles to salute as he receives Purple Heart. 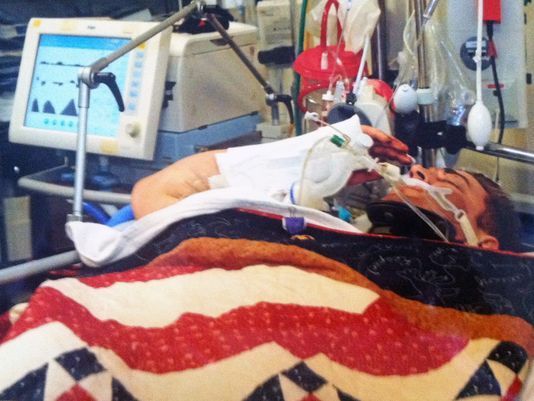 An Army Ranger wounded in Afghanistan has the Internet buzzing with a photo that Web viewers have dubbed "the salute seen around the world."
STORY: Former Army officer gets Medal of Honor
Cpl. Josh Hargis, whose special operations unit is based at Fort Benning, Ga., was wounded Oct. 6 when an Afghan woman detonated a suicide bomb vest in Panjwai in Kandahar Province and triggered 13 other explosive devices. The blast killed four members of Hargis' 3rd Army Ranger Battalion and wounded 12 other American soldiers.
Hargis, a 2008 graduate of Cincinnati's Gilbert Dater High School, went to a nearby military hospital. His numerous wounds called for him to hooked up to a breathing tube and other medical plumbing.
"Josh was seriously wounded, as you know, and survived for almost two hours after his injury before arriving to the hospital," Hargis' commander wrote Saturday to the soldier's wife, Taylor Hargis, who was at their home in Columbus, Ga.
His right hand was heavily bandaged. That hand, his saluting hand, rested under red, white and blue blankets when his commanding officer came into his room to present Hargis with a Purple Heart.
"Josh had just come out of surgery. Everyone in the room, probably about 50 people, figured he was unconscious," Taylor Hargis said Tuesday. The soldier's wife of 2½ years spoke by phone from San Antonio, Texas, where her husband will be hospitalized. He is en route from an American military hospital in Germany.
Yet, as the Purple Heart presentation began, Josh Hargis struggled to move his right hand and lift it into a saluting position. Military protocol calls for a soldier to salute when he receives the Purple Heart.
[SUP]“[/SUP]Grown men began to weep, and we were speechless at a gesture that speak volumes about Josh's courage and character.[SUP]”[/SUP]
— Josh Hargis' commander, in letter to Hargis' wife
A doctor tried to restrain the wounded soldier's right arm. It was, alas, a losing battle.
"He had no idea how strong and driven my husband is," said Taylor Hargis, who went to high school in Fort Myers, Fla.
In pain from his wounds, still groggy from surgery, bandaged, hooked up to yards of tubes and without opening his blue-green eyes, Hargis delivered what his wife described as "the most beautiful salute any person in that room had ever seen."
The commanding officer told her the salute left everyone in the room in tears.
"I would have cried, too," Taylor Hargis said. "I also would have told him how proud I am of him, how proud I am to be his wife, how proud I am of the people he's serving with over in Afghanistan."
She also would have told him she was not surprised by his hospital-bed salute.
"He was just showing what it means to be a warrior and an American soldier," Taylor Hargis said.
Since the photo was taken of "the salute around the world," the corporal's breathing tube has been removed. Josh and Taylor Hargis have exchanged phone calls. She knows from the sound of his voice "he's going to be just fine."
Here's why: "If you want to know the meaning of strong, it's an Army Ranger," she said.

Somebody cuttin' onions in here?

a true american hero, someone to look up too, thank you for your service

They don't come much better than that.

I am going to rip obasturd off " I wish he could be my son". I'm just as impressed with his Dad. Shows that there are Great people out there.
O