In an article published today in the "Motley Fool", author Rich Duprey reveals that Remington Arms in Illion, New York has has shifted its operations from that New York location to one in Alabama. Reason for the move was new and punitive anti gun measures in New York state.

The article continues with a pro gun explanation of how restrictive gun measures make little sense in light of statistics that show them to be ineffective and unnecessary. FBI statistics and narrative from that article are shown below.

"Despite its popularity and politicians' fixation on it, the rifle is used in fewer crimes than other more common household items, like knives or hammers. In fact, hands, fists, and feet are used in twice as many murders as rifles. Overall, violent crimes with guns have been on the decline for years, and the murder rate by guns is at its lowest point since at least 1981, according to FactCheck.org. And all of that is occurring as gun ownership has increased." 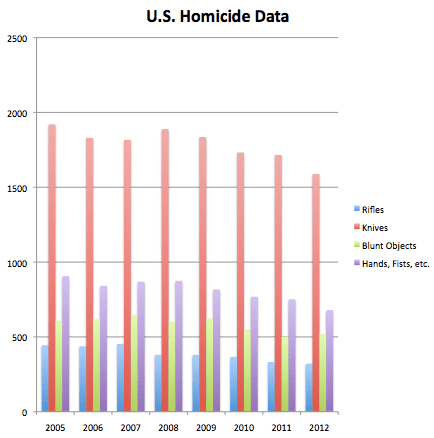 This is great article that will make you smile!

Liberals made a sneak attack in round one. Round two is just getting up to speed!

Now i can start buying there products again

It certainly appears Big Green is setting the stage to move the majority of their operations out of NY. Can't say I blame them.
They'll probably keep a skeleton operation on at the NY site so they will not get killed with environmental clean up.
Good for them!

cbigclarke said:
Now i can start buying there products again

Sent from my DROID RAZR using Tapatalk
Click to expand...

Using facts will still not affect the idiot anti gunners. But thanks for posting.

Sent from my MB865 using Tapatalk

PhulesAu said:
Using facts will still not affect the idiot anti gunners. But thanks for posting.
Click to expand...

Yup, just listen to the testimonies during ANY of the gun law debates in CO last year or the attempt to repeal them this year.
Opponents- fact based with real life experiences, reputable source statistics and verified studies such as the crime chart shown above etc.
Proponents- whining, crying emotionally based suppositions and statements, dubious and unverified studies.

Made no difference whatsover.
Liberals are gonna lib no matter what facts smack them in the face.

Las Vegas, Nevada someday to be Ft. Worth, Texas

Oh gee. You mean they didn't take advantage of all the "good" shit that New York ad was spewing? How they're so business friendly .... no taxes for 10 years, and how they're there to make their point about how "progressive" they are? </sarcasm>