The Rules of Gunfighting
David E. Petzal
(Editor's Note: Normally, this forum is dedicated to peaceful pursuits. However, SFC Frick speaks much wisdom. I am giving him a meritorious promotion to Command Sergeant Major.)
Drill Sergeant Joe B. Fricks Rules For A Gunfight
1. Forget about knives, bats and fists. Bring a gun. Preferably, bring at least two guns. Bring all of your friends who have guns. Bring four times the ammunition you think you could ever need.
2. Anything worth shooting is worth shooting twice. Ammunition is cheap - life is expensive. If you shoot inside, buckshot is your friend. A new wall is cheap - funerals are expensive
3. Only hits count. The only thing worse than a miss is a slow miss.
4. If your shooting stance is good, you're probably not moving fast enough or using cover correctly.
5. Move away from your attacker and go to cover. Distance is your friend. (Bulletproof cover and diagonal or lateral movement are preferred.)
6. If you can choose what to bring to a gunfight, bring a semi or full-automatic long gun and a friend with a long gun.
7. In ten years nobody will remember the details of caliber, stance, or tactics. They will only remember who lived.
8. If you are not shooting, you should be communicating, reloading, and running. Yell "Fire!" Why "Fire"? Cops will come with the Fire Department, sirens often scare off the bad guys, or at least cause then to lose concentration and will.... and who is going to summon help if you yell "Intruder," "Glock" or "Winchester?"
9. Accuracy is relative: most combat shooting standards will be more dependent on "pucker factor" than the inherent accuracy of the gun.
10. Someday someone may kill you with your own gun, but they should have to beat you to death with it because it is empty.
11. Stretch the rules. Always win. The only unfair fight is the one you lose.
12. Have a plan.
13. Have a back-up plan, because the first one won't work. "No battle plan ever survives 10 seconds past first contact with an enemy."
14. Use cover or concealment as much as possible, but remember, sheetrock walls and the like stop nothing but your pulse when bullets tear through them.
15. Flank your adversary when possible. Protect yours.
16. Don't drop your guard.
17. Always tactical load and threat scan 360 degrees. Practice reloading one-handed and off-hand shooting. That's how you live if hit in your "good" side.
18. Watch their hands. Hands kill. Smiles, frowns and other facial expressions don't (In God we trust. Everyone else keep your hands where I can see them.)
19. Decide NOW to always be aggressive ENOUGH, quickly ENOUGH.
20. The faster you finish the fight, the less shot you will get.
21. Be polite. Be professional. But, have a plan to kill everyone you meet if necessary, because they may want to kill you.
22. Be courteous to everyone, overly friendly to no one.
23. Your number one option for personal security is a lifelong commitment to avoidance, deterrence, and de-escalation.
24. Do not attend a gunfight with a handgun, the caliber of which does not start with anything smaller than "4".
25. Use a gun that works EVERY TIME. "All skill is in vain when an Angel blows the powder from the flintlock of your musket." At a practice session, throw you gun into the mud, then make sure it still works. You can clean it later.
26. Practice shooting in the dark, with someone shouting at you, when out of breath, etc.
27. Regardless of whether justified of not, you will feel sad about killing another human being. It is better to be sad than to be room temperature.
28. The only thing you EVER say afterwards is, "He said he was going to kill me. I believed him. I'm sorry, Officer, but I'm very upset now. I can't say anything more. Please speak with my attorney."
Finally, Drill Sergeant Frick's Rules For Un-armed Combat.
1. Never be unarmed."
L

Those are excellent rules. Thanks for posting them. I'm going to share these with my co-workers.

I like this...e-mailed a copy to some friends.
P

A big hole is better than a little hole.

More holes are better than one hole.

Bullet placement is King, penetration is Queen, all other issues are angels dancing on the head of a pin (My friend Erich taught me this truth)

Rule #1, NEVER give up. Determination is sometimes the only thing separating the winners from the losers, and in extreme cases, life or death.
F

One of the guys at SigForum put this together. I thought it was pretty damned funny. Not sure if they all fit exactly the same as Hoji posted. 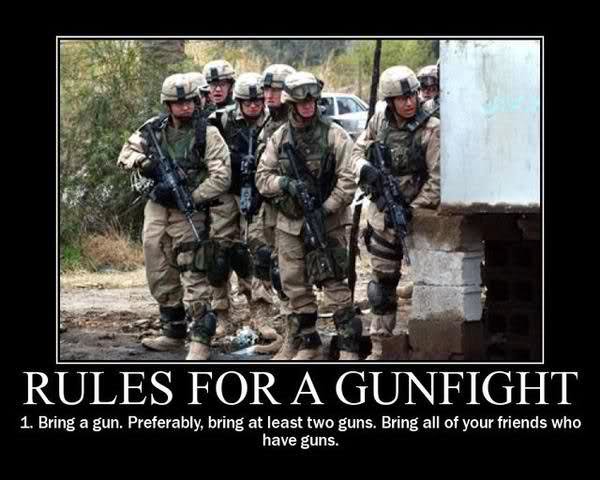 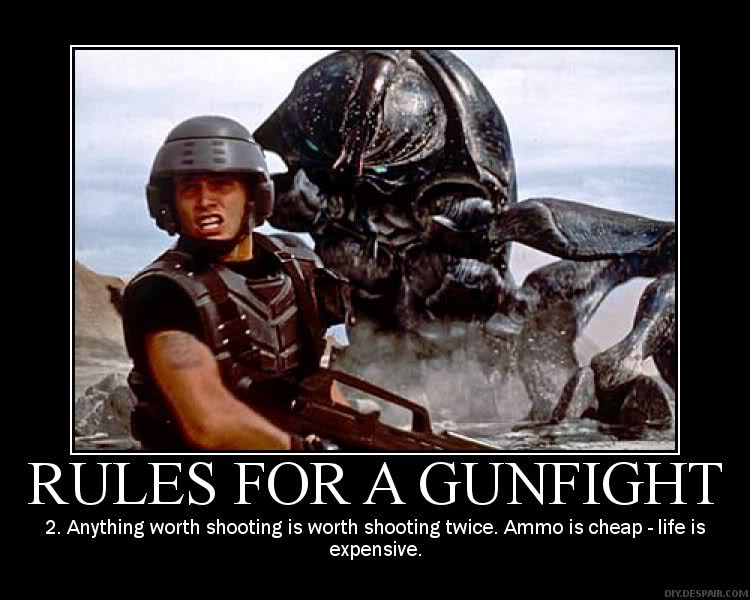 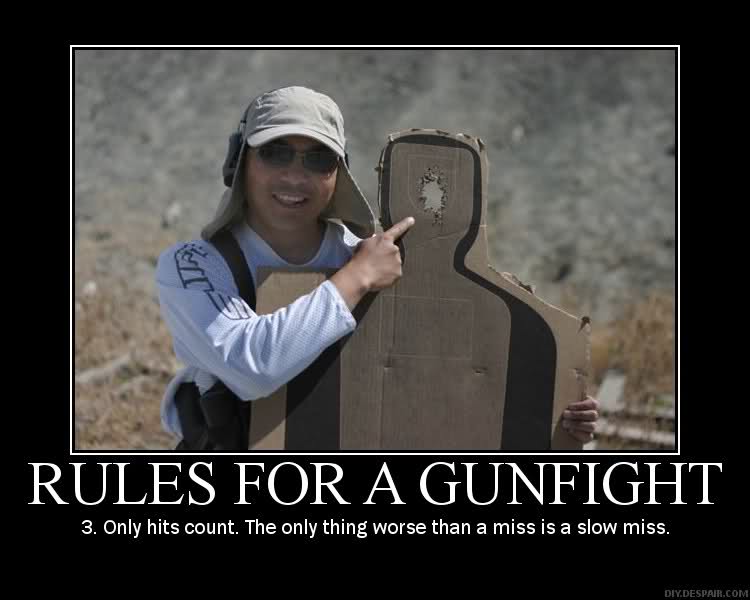 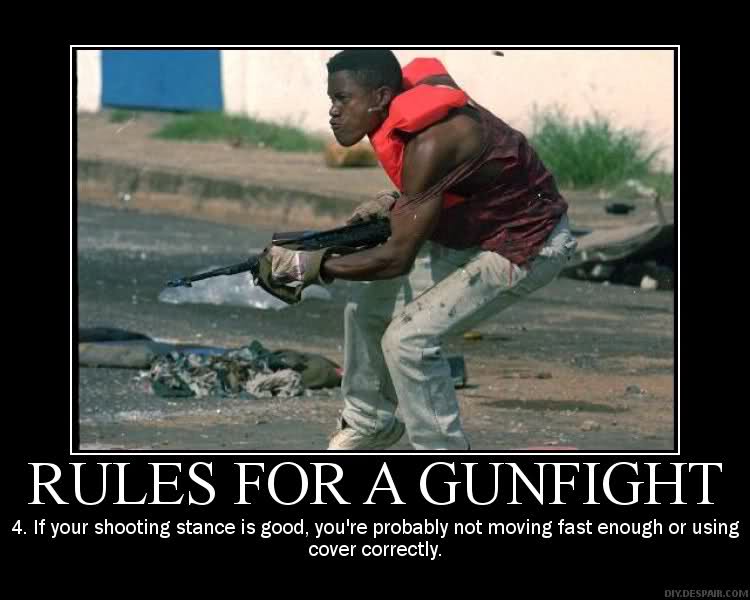 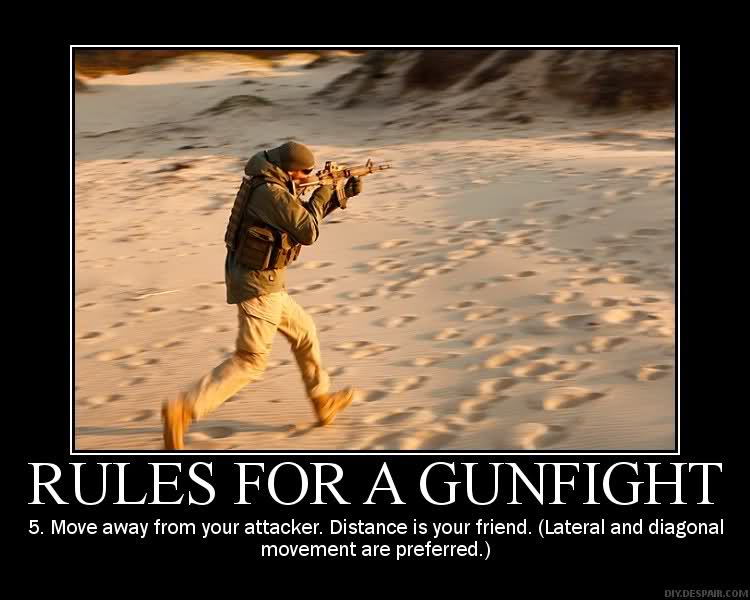 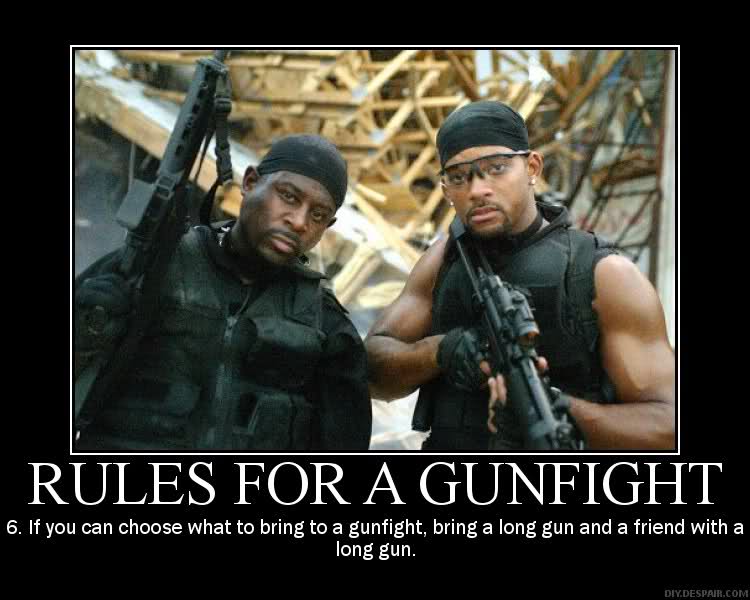 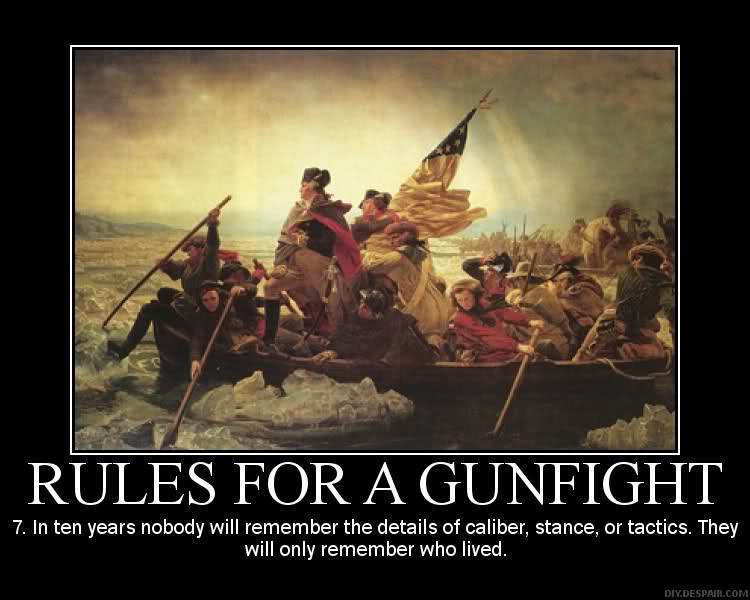 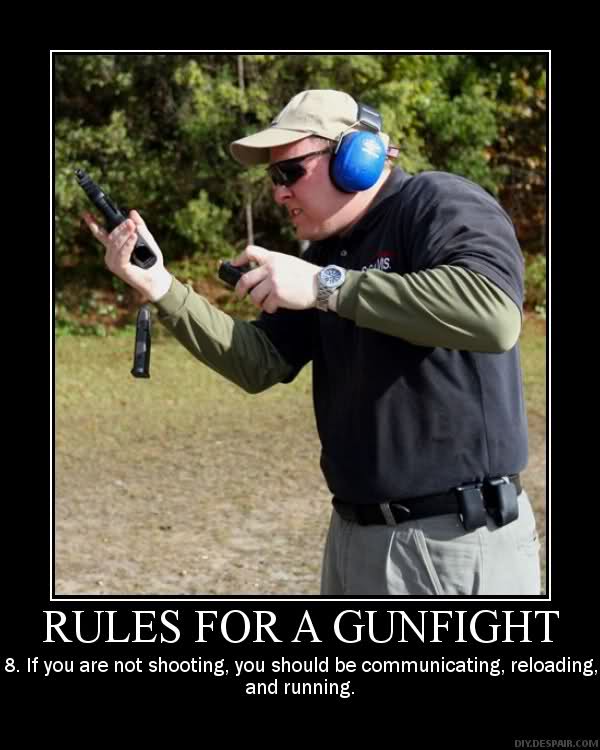 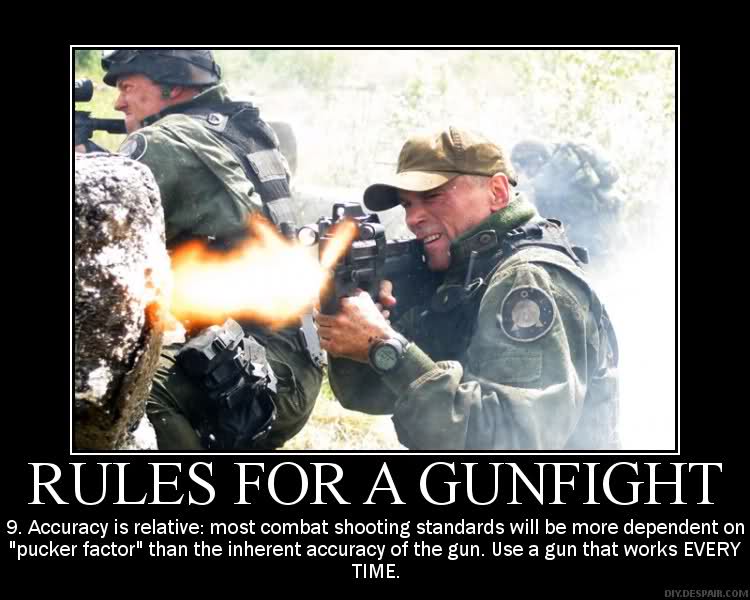 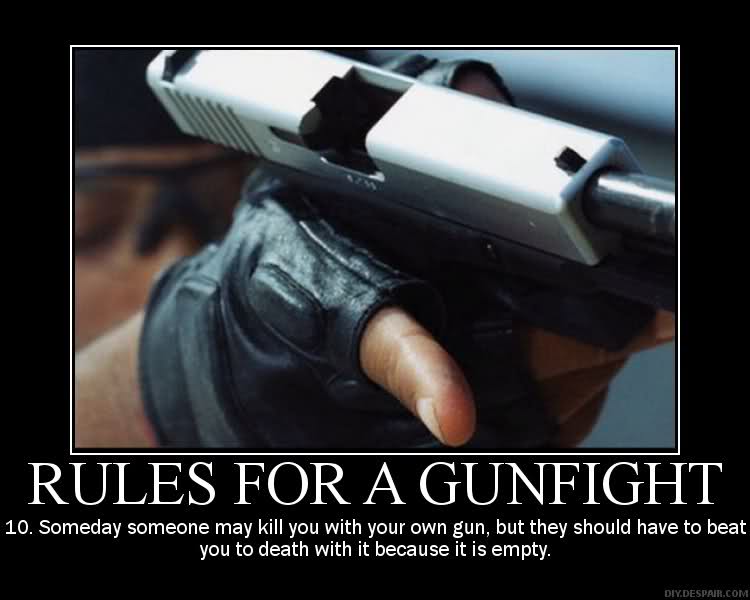 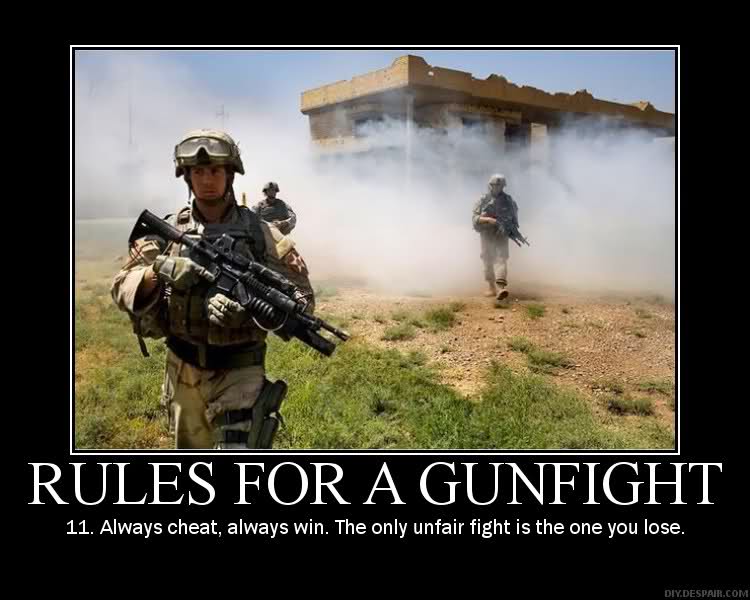 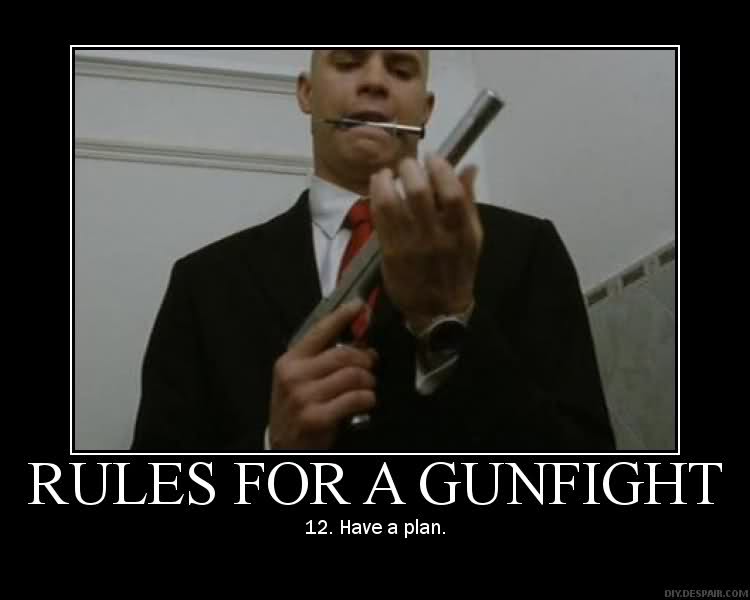 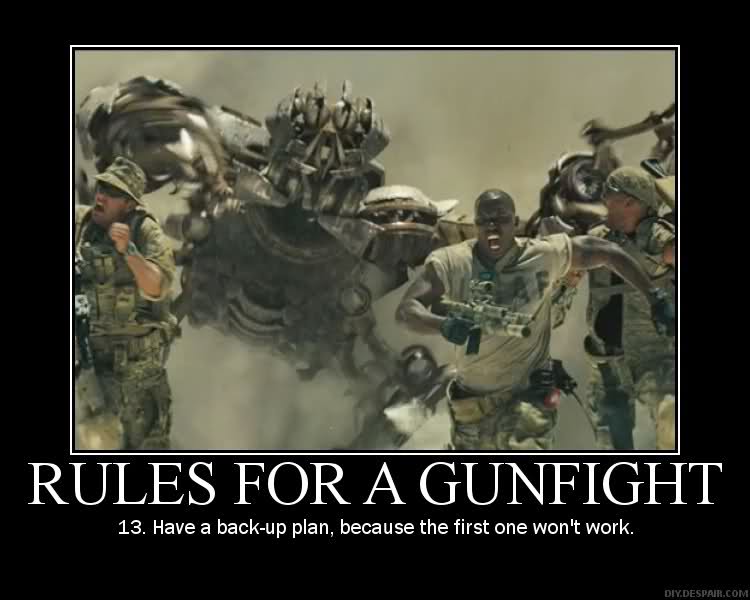 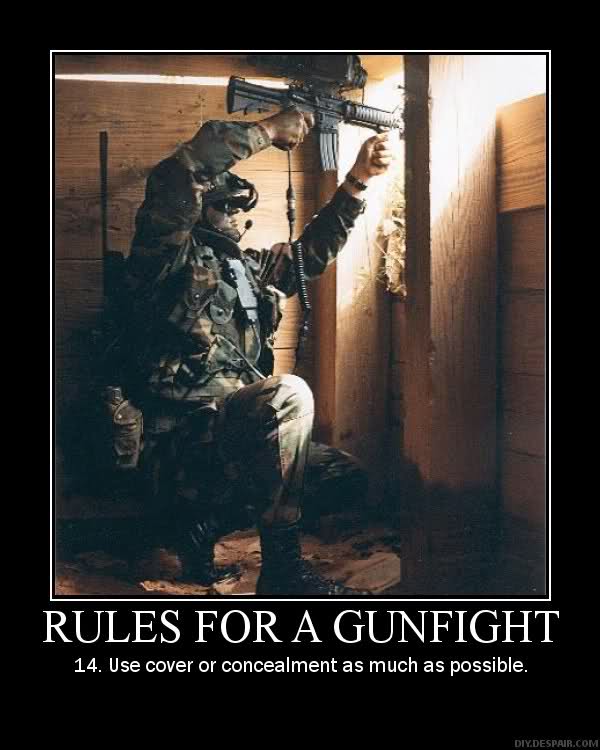 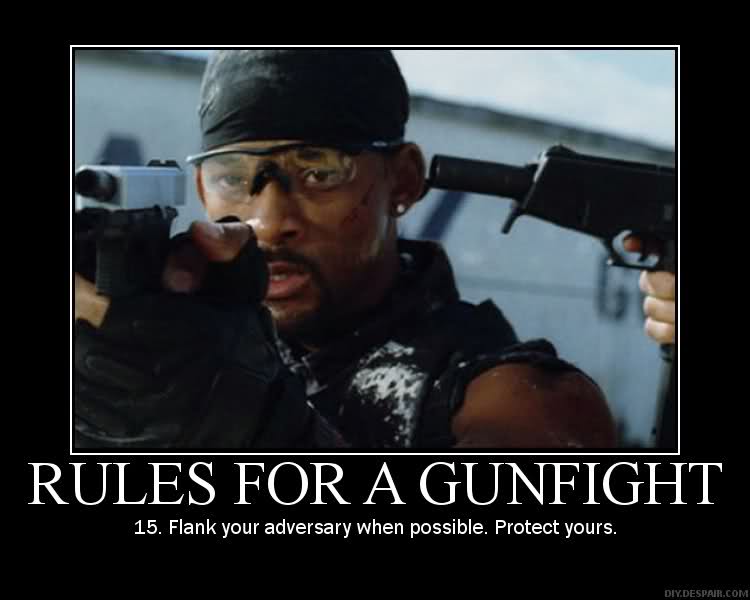 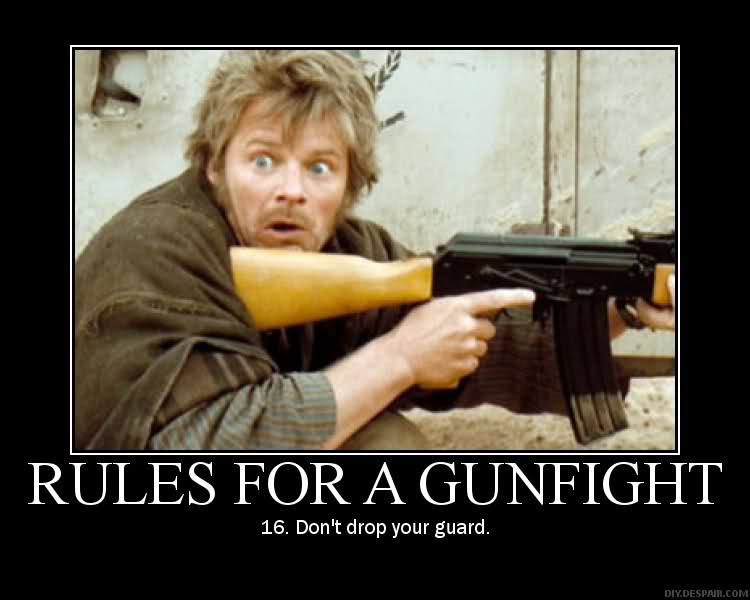 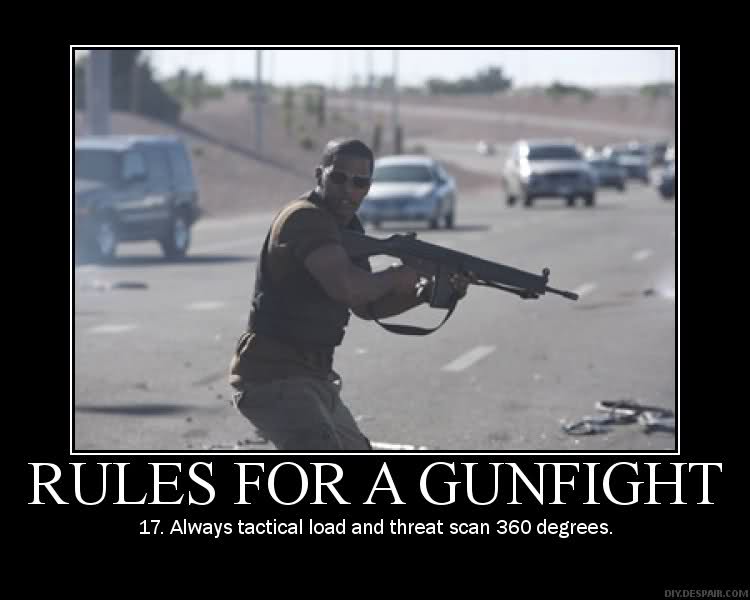 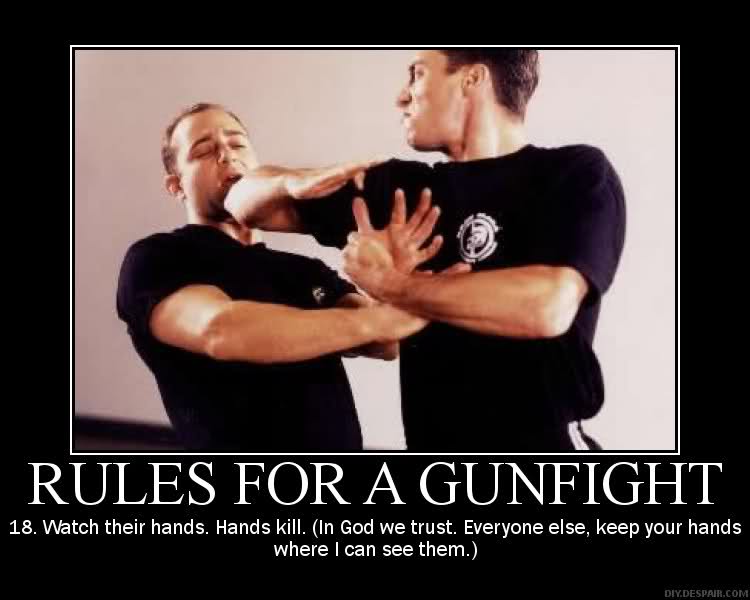 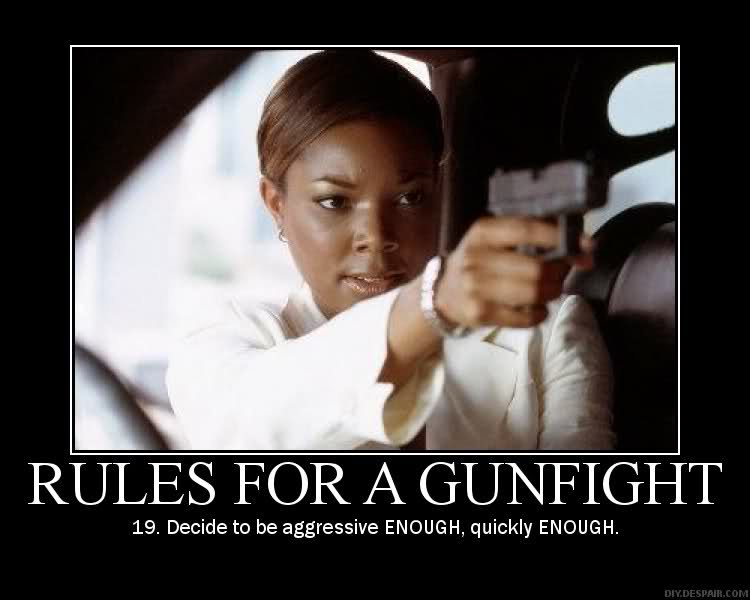 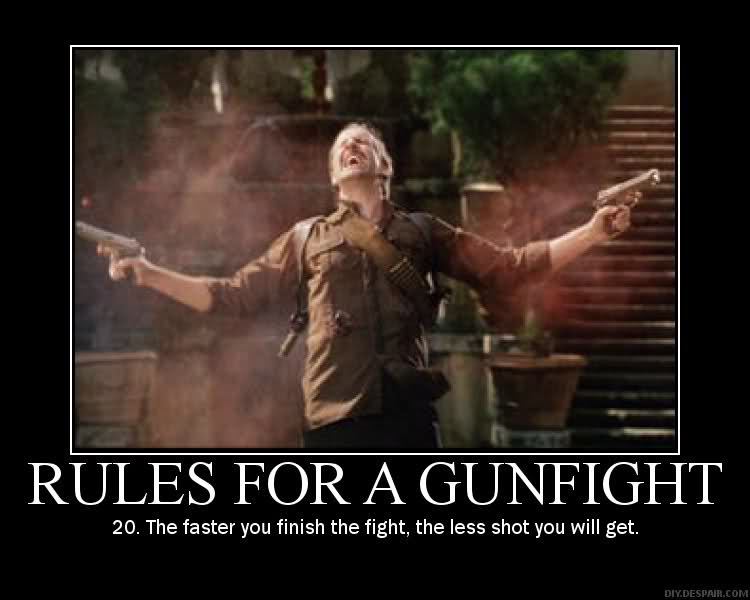 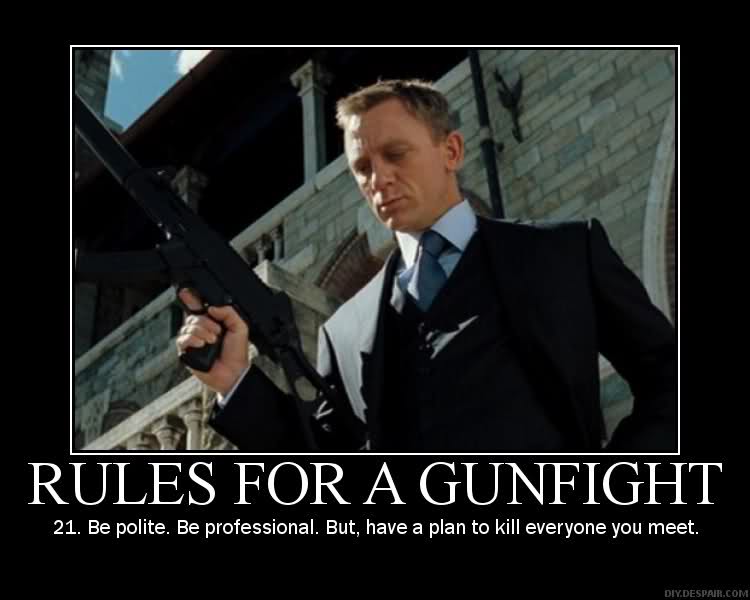 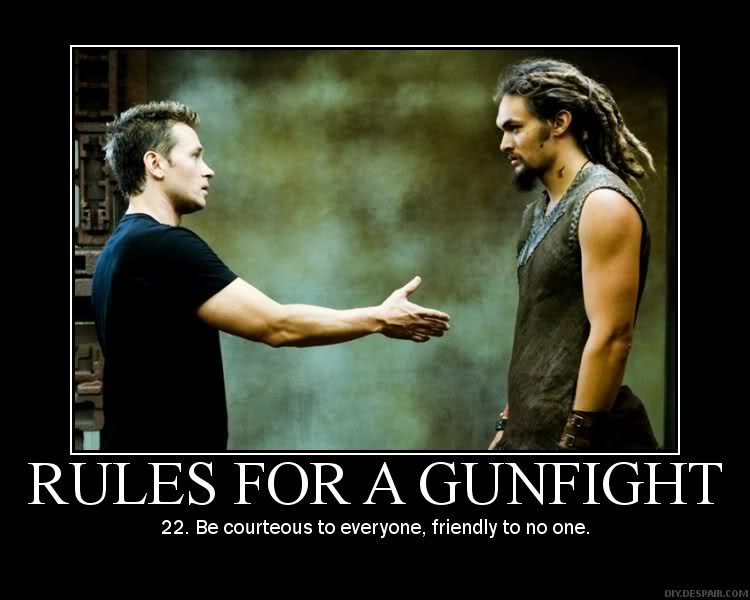 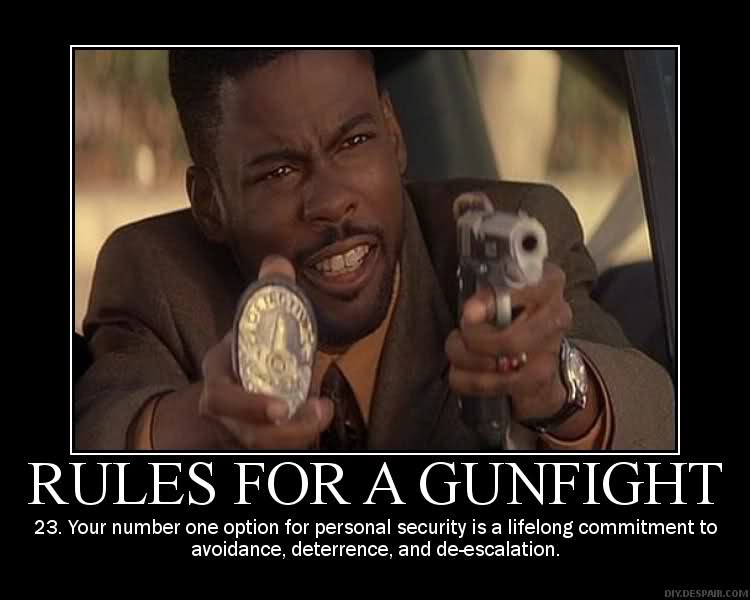 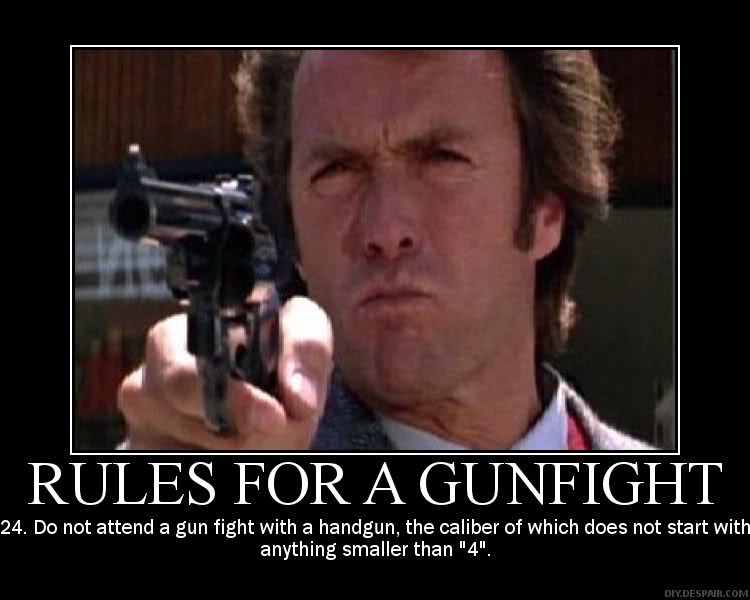 Love the visual aids.
B

Thanks Hoji that was excellent.
R