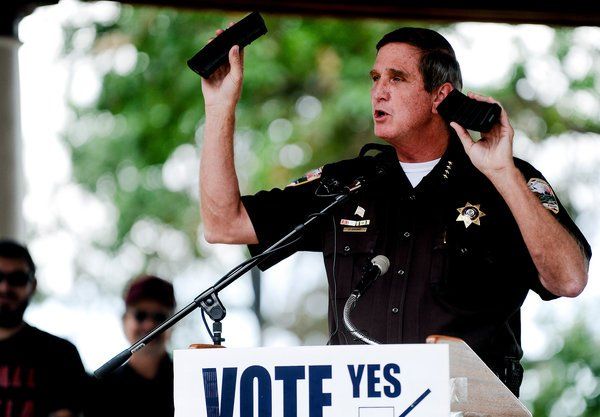 John Cooke is among the Colorado sheriffs who are resisting enforcement of new state gun laws.

GREELEY, Colo. — When Sheriff John Cooke of Weld County explains in speeches why he is not enforcing the state’s new gun laws, he holds up two 30-round magazines. One, he says, he had before July 1, when the law banning the possession, sale or transfer of the large-capacity magazines went into effect. The other, he “maybe” obtained afterward.

He shuffles the magazines, which look identical, and then challenges the audience to tell the difference.

“How is a deputy or an officer supposed to know which is which?” he asks.

Colorado’s package of gun laws, enacted this year after mass shootings in Aurora, Colo., and Newtown, Conn., has been hailed as a victory by advocates of gun control. But if Sheriff Cooke and a majority of the other county sheriffs in Colorado offer any indication, the new laws — which mandate background checks for private gun transfers and outlaw magazines over 15 rounds — may prove nearly irrelevant across much of the state’s rural regions.

Some sheriffs, like Sheriff Cooke, are refusing to enforce the laws, saying that they are too vague and violate Second Amendment rights. Many more say that enforcement will be “a very low priority,” as several sheriffs put it. All but seven of the 62 elected sheriffs in Colorado signed on in May to a federal lawsuit challenging the constitutionality of the statutes.

The resistance of sheriffs in Colorado is playing out in other states, raising questions about whether tougher rules passed since Newtown will have a muted effect in parts of the American heartland, where gun ownership is common and grass-roots opposition to tighter restrictions is high.

In New York State, where Gov. Andrew M. Cuomo signed one of the toughest gun law packages in the nation last January, two sheriffs have said publicly they would not enforce the laws — inaction that Mr. Cuomo said would set “a dangerous and frightening precedent.” The sheriffs’ refusal is unlikely to have much effect in the state: According to the state’s Division of Criminal Justice Services, since 2010 sheriffs have filed less than 2 percent of the two most common felony gun charges. The vast majority of charges are filed by the state or local police.

In Liberty County, Fla., a jury in October acquitted a sheriff who had been suspended and charged with misconduct after he released a man arrested by a deputy on charges of carrying a concealed firearm. The sheriff, who was immediately reinstated by the governor, said he was protecting the man’s Second Amendment rights.

And in California, a delegation of sheriffs met with Gov. Jerry Brown this fall to try to persuade him to veto gun bills passed by the Legislature, including measures banning semiautomatic rifles with detachable magazines and lead ammunition for hunting (Mr. Brown signed the ammunition bill but vetoed the bill outlawing the rifles).

“Our way of life means nothing to these politicians, and our interests are not being promoted in the legislative halls of Sacramento or Washington, D.C.,” said Jon E. Lopey, the sheriff of Siskiyou County, Calif., one of those who met with Governor Brown. He said enforcing gun laws was not a priority for him, and he added that residents of his rural region near the Oregon border are equally frustrated by regulations imposed by the federal Forest Service and the Environmental Protection Agency.

This year, the new gun laws in Colorado have become political flash points. Two state senators who supported the legislation were recalled in elections in September; a third resigned last month rather than face a recall. Efforts to repeal the statutes are already in the works.

Countering the elected sheriffs are some police chiefs, especially in urban areas, and state officials who say that the laws are not only enforceable but that they are already having an effect. Most gun stores have stopped selling the high-capacity magazines for personal use, although one sheriff acknowledged that some stores continued to sell them illegally. Some people who are selling or otherwise transferring guns privately are seeking background checks.

Eric Brown, a spokesman for Gov. John W. Hickenlooper of Colorado, said, “Particularly on background checks, the numbers show the law is working.” The Colorado Bureau of Investigation has run 3,445 checks on private sales since the law went into effect, he said, and has denied gun sales to 70 people.

A Federal District Court judge last month ruled against a claim in the sheriffs’ lawsuit that one part of the magazine law was unconstitutionally vague. The judge also ruled that while the sheriffs could sue as individuals, they had no standing to sue in their official capacity.

“We’re not in the position of telling sheriffs and chiefs what to do or not to do,” said Lance Clem, a spokesman for the Colorado Department of Public Safety. “We have people calling us all the time, thinking they’ve got an issue with their sheriff, and we tell them we don’t have the authority to intervene.”

Sheriffs who refuse to enforce gun laws around the country are in the minority, though no statistics exist. In Colorado, though, sheriffs like Joe Pelle of Boulder County, who support the laws and have more liberal constituencies that back them, are outnumbered.

Even Sheriff W. Pete Palmer of Chaffee County, one of the seven sheriffs who declined to join the federal lawsuit because he felt duty-bound to carry out the laws, said he was unlikely to aggressively enforce them. He said enforcement poses “huge practical difficulties,” and besides, he has neither the resources nor the pressure from his constituents to make active enforcement a high priority. Violations of the laws are misdemeanors.

“All law enforcement agencies consider the community standards — what is it that our community wishes us to focus on — and I can tell you our community is not worried one whit about background checks or high-capacity magazines,” he said.

At their extreme, the views of sheriffs who refuse to enforce gun laws echo the stand of Richard Mack, a former Arizona sheriff and the author of “The County Sheriff: America’s Last Hope.” Mr. Mack has argued that county sheriffs are the ultimate arbiters of what is constitutional and what is not. The Constitutional Sheriffs and Peace Officers Association, founded by Mr. Mack, is an organization of sheriffs and other officers who support his views.

“The Supreme Court does not run my office,” Mr. Mack said in an interview. “Just because they allow something doesn’t mean that a good constitutional sheriff is going to do it.” He said that 250 sheriffs from around the country attended the association’s recent convention.

Matthew J. Parlow, a law professor at Marquette University, said that some states, including New York, had laws that allowed the governor in some circumstances to investigate and remove public officials who engaged in egregious misconduct — laws that in theory might allow the removal of sheriffs who failed to enforce state statutes.

But, he said, many governors could be reluctant to use such powers. And in most cases, any penalty for a sheriff who chose not to enforce state law would have to come from voters.

Sheriff Cooke, for his part, said that he was entitled to use discretion in enforcement, especially when he believed the laws were wrong or unenforceable.

“In my oath it says I’ll uphold the U.S. Constitution and the Constitution of the State of Colorado,” he said, as he posed for campaign photos in his office — he is running for the State Senate in 2014. “It doesn’t say I have to uphold every law passed by the Legislature.”

I'm glad there are LEOs/LEAs who are on our side about things like this.

A KLBJ listener called this action by the sheriffs of CO a "military coup". That's a stretch. I wonder what that same liberal listener would call barry's refusal to enforce immigration laws, or even his own Barry-don't-care laws? Those refusals to me smack more of a legislative coup than laws that infringe on our liberties.

Anger said:
A KLBJ listener called this action by the sheriffs of CO a "military coup". That's a stretch. I wonder what that same liberal listener would call barry's refusal to enforce immigration laws, or even his own Barry-don't-care laws? Those refusals to me smack more of a legislative coup than laws that infringe on our liberties.
Click to expand...

Oh no. To the radical set that is "social justice".

As much as I agree with the officers, I wish that they wouldn't say "We aren't going to enforce those laws." It suggests manipulation and favoritism on the part of the LEO's. "I didn't see it" works best and there's no way to turn it into a media circus, then.

ROGER4314 said:
As much as I agree with the officers, I wish that they wouldn't say "We aren't going to enforce those laws." It suggests manipulation and favoritism on the part of the LEO's. "I didn't see it" works best and there's no way to turn it into a media circus, then.

"We physically CAN'T enforce these laws" would have been better phrasing I think. If they can't tell the difference between their own pre and post ban magazines. How are sheriffs and deputies supposed recognize a contraband magazine owned by someone else? -> They can't.

In any case it's good for them to speak out. Makes it easier for the state supreme court to strike down the law as vague or ambiguous.

Anger said:
A KLBJ listener called this action by the sheriffs of CO a "military coup". That's a stretch. I wonder what that same liberal listener would call barry's refusal to enforce immigration laws, or even his own Barry-don't-care laws? Those refusals to me smack more of a legislative coup than laws that infringe on our liberties.
Click to expand...

Bob Beckel, one of Fox's token libs, said over the weekend the sheriffs should be arrested and charged. Funny, I've never heard him say the same about BHO, Holder, etc.
Last edited: Dec 17, 2013
A

Glockster69 said:
Bob Beckel, one of Fox's token libs, said over the weekend the sheriffs should be arrested and charged. Funny, I've never heard him say the same about BHO, Holder, etc.
Click to expand...

Beckel is a tool, and not too smart either.
S

I heard Beckel say that too. I agree with him if they round up the anti-CLEO signoff Sheriffs too.

Anyway, I don't mind Bob so much anymore, he's thorough about stuff he knows. But he's a hot head about stuff he doesn't. He's grown on me. But he hates guns, so any topic related to guns and he spouts the typical Liberal left talking points. Oddly enough, he was against the stop & frisk laws in NY. Which surprised me. I figured he would have been all about it.
You must log in or register to reply here.
Share:
Facebook Twitter Reddit Pinterest Tumblr WhatsApp Email Share Link