Well, I picked up a used ACR Enhanced recently. Honestly, I usually do not buy rifles in this price point but the price I paid for this rifle was too good to pass up. I really had no choice......

Let me just say that it is a beautiful firearm. Everything on it is designed for function. Ergonomics are there also but it doesn't have anything extra to make it pretty. Purely a battle rifle and not a BBQ gun. That is how I like my firearms.

I did not have the proper equipment to put any serious groups together at the range. I was more concerned about sighting in the iron sights and testing function.

It comes with Troy Industries flip up iron sights. They are good sights and sighting them in went just like any AR rifle. Simple and easy.

I then mounted a 4-12x44 Vortex scope that I had laying around. The rings I had handy barely let the scope clear the rail. On a standard AR this is a problem but not with the ACR. Being a piston design allows it to have drop at the comb since it doesn't need a buffer tube. It actually worked pretty well. No need to raise the scope way up like a PEPR mount or similiar would do. In fact, that may be too high on this rifle.

Two issues with benchresting it. My sand bags weren't tall enough to comfortably clear the pistol grip. I didn't even have a bipod that fit it properly. Also, the trigger is horrid. You name a problem with a trigger and this one has it. Slack, overtravel, heavy, gritty, creep, yup. All acounted for. Again, it is a battle rifle. My Lyman trigger scale read anywhere from 7 1/2 to 9 pounds of pull weight. Did I mention the trigger is bad?

I have read that it is a 2 MOA rifle but I think it can do much better. With better bags, load development, and some trigger work I think it will shoot 1 MOA.

Putting 15 rounds of the Federal into one group gave a four inch total spread. The ten best went into a group under two inches. The best five went into 3/4".

Yeah, I pulled a few but that is how it shot. This is also shooting from a loaded mag. Generally when I am shooting serious groups I load single shot. But I proved to myself that the rifle will shoot better than 2 MOA. A little more work will cement that I believe.

The rifle is heavier than a standard AR. It is front heavy also due to the piston system being above the barrel. But it does handle well. The factory AFG fits the rifle very well and it's placement seems to negate some of heft.

The ACR breaks down very easily. All you need is a loaded round or punch to start the pins out. The barrel removes with just a turn of a funky ratchet mounted under it. Even the trigger group comes right out.

I fired over 100 rounds and the bolt was very clean. One little wipe with a rag and it was spotless again.

I used a couple different Pmags and one old 20 round GI mag for the test. Every round fed flawlessly. The only issue I had was the GI mag didn't lock the bolt open every time. The Pmags did and the GI mag did sometimes. I am gonna go with mag issue on that one. The gun spit out all the fired cases into a little pile about ten feet away and a few feet forward.

I think this is a very nice rifle. I like ARs and this rifle is a big improvement in my opinion. The folding stock is very nice. It does have an adjustable buttstock like most ARs but it also has a built in adjustable cheekpiece. The ACR also has built in quick attach points for a sling. It also has an ambidextrous mag release, safety, bolt release, and a reversible non-reciprocating forward charging handle. The ejection port is not reversable but, being a left handed shooter, I didn't even come close to getting hit by fired case.

I do have a few complaints. The bolt release is at the bottom of the back of the mag well. It is also very stiff. I guess since you are probably seating a mag anyways it is okay, but it takes a little getting used to. Also the cheek piece is too far forward for my build. I found myself behind it often and having to readjust.

If you are looking for the modular system that the ACR was supposed to be, it is not. The aftermarket has not been supported like it was supposed to be. It takes a gunsmith to get you other calibers or barrel lengths. These were supposed to be over the counter items but they are nowhere to be found.

I have read of ways to drop in a better trigger but it does take some modification. I am not aware of a straight drop in trigger available for it.

The piston system only has two settings, unsuppressed and suppressed. No single shot option like many piston rifles seem to have.

All in all I think it is a very nice rifle. A two thousand plus dollar rifle? Well, depends on what you want in a rifle and can afford. If you find a good deal on one I would buy it. Obviously.

I will get some pictures up in just a second. 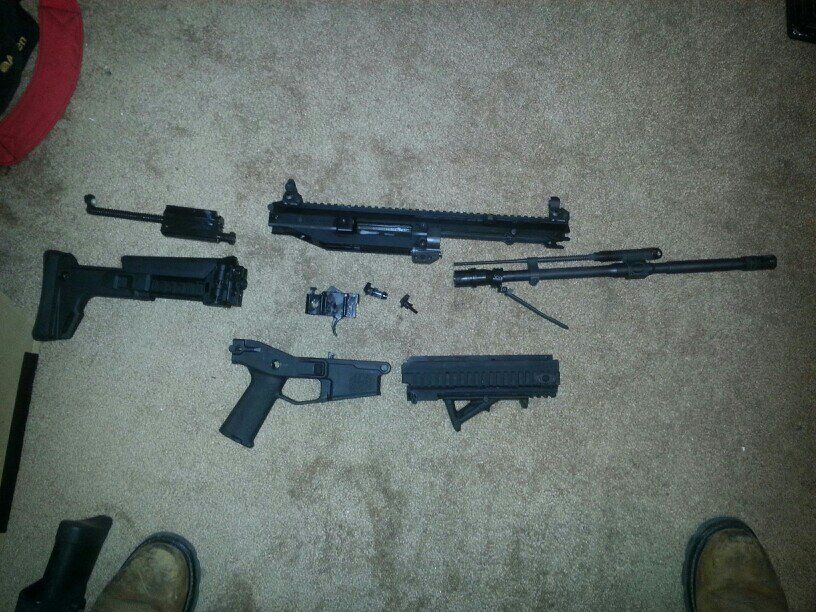 One loaded round or punch takes the rifle down this far. I didn't try to take it down any further though. 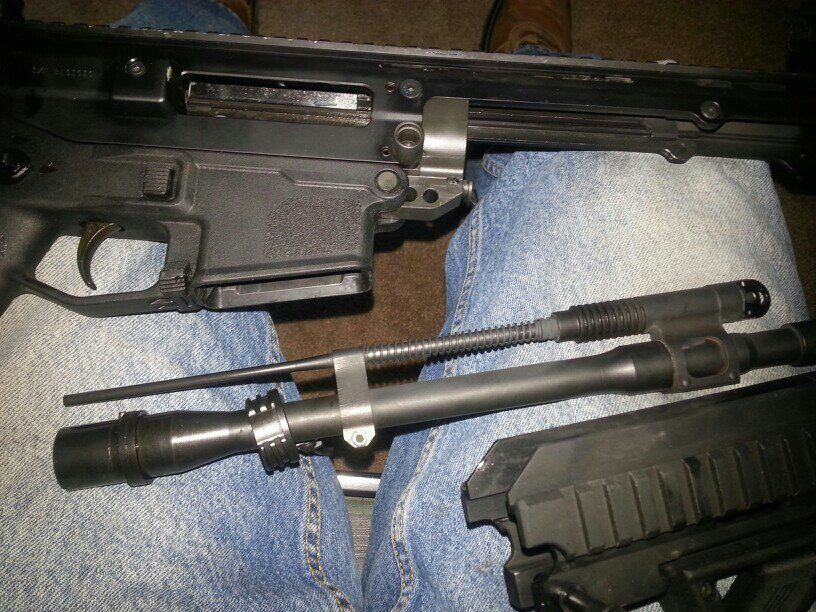 The barrel comes right off with a turn of the built in ratchet. This makes it very easy to clean. I would say to swap calibers or put on a different length barrel but there is nothing available. Different barrels were supposed to be released over a year ago so I am not holding my breath. 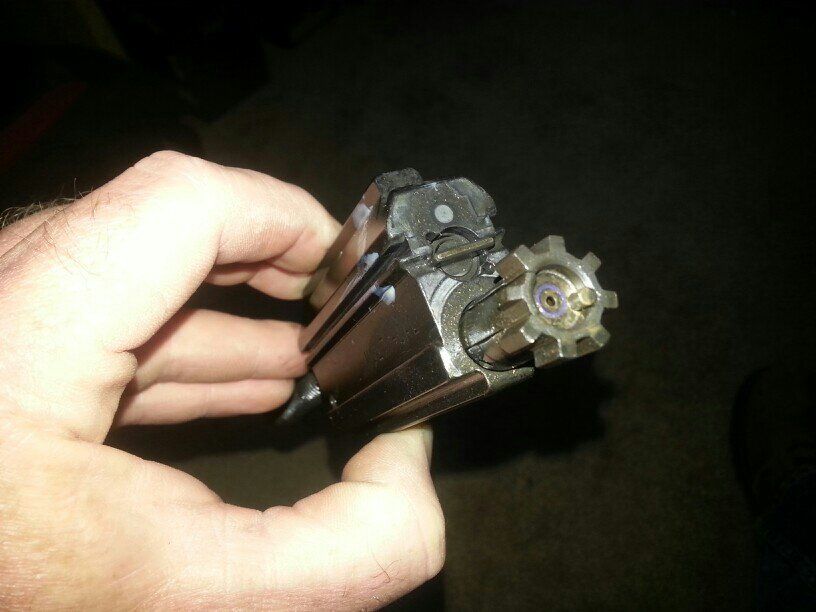 The bolt is very clean. This is after my 100 round test. Wipe it down and you are good to go.

that's a perty nice lookin rifle Bigun and a good wright up as well.
Thanks for posting & sharing...

Hello from a new guy. I just bought an ACR last week myself, Basic Folder in Coyote Tan. I agree completely with your write up, haven't had a chance to shoot mine yet, but looking forward to it after seeing your report. Got a question for ya, was your barrel hard to remove the first time or two you took it apart?

Willieboy said:
Hello from a new guy. I just bought an ACR last week myself, Basic Folder in Coyote Tan. I agree completely with your write up, haven't had a chance to shoot mine yet, but looking forward to it after seeing your report. Got a question for ya, was your barrel hard to remove the first time or two you took it apart?
Click to expand...

I bought mine used and I assume it had been removed before. It was a little tight but nothing worth commenting on. Tighter than the last few times I have removed it anyways.

Is yours brand new?
W

Yes mine is new...I had to take a rubber mallet and while pulling on the barrel and tapping on the upper in the opposite direction finally got it off. Had to use the mallet to get it seated back in all the way too. I was a little concerned about this but from what I can see surfing the various sites, it seems to be a fairly common thing with new rifles.

How heavy is the that railed fore end? I went with the basic model in the interest of keeping the weight down, have never handled the enhanced version, but figured it was gonna be a little more heavier. That and I need another rifle with a quad rail like I need a hole in my head!!!! LOL
You must log in or register to reply here.
Share:
Facebook Twitter Reddit Pinterest Tumblr WhatsApp Email Share Link