Sons of Obama strike again, this time in San Antonio

This news may already be posted here but I didn't see it. 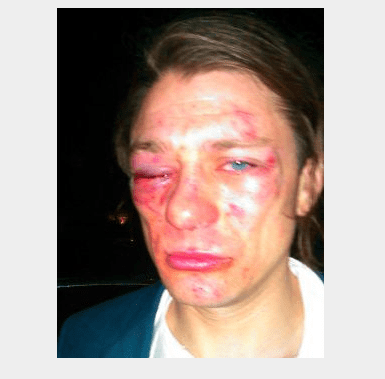 SAN ANTONIO —
A man who was attacked after leaving a bar on the Northwest Side early Friday might have been a victim of the knockout game.

Cody Robinson, 30, said he had just arrived at his car after leaving the España Bar de Tapas, at 5638 W. Hausman Road, around 2 a.m. when an unidentified man punched him in the face and shouted “knockout.”

The knockout game is a random act of violence in which an assailant attempts to knock out a person with one punch. According to the Associated Press, the game has resulted in serious injuries, even death, nationally.

Robinson’s attack didn’t stop after the punch. He said at least four men surrounded and repeatedly stomped on him.

San Antonio Police, however, refused to call Robinson a knockout game victim because of what he told officers at the scene.

According to a police report, Robinson said he left the bar while a large fight was going on outside. As he walked through the fight to get to his car, a man questioned him. After a brief exchange, the report said, Robinson told officers approximately eight men jumped him.

“There was no fight. It was an assault,” he said.

Gribbon said Robinson was followed to his car, which was parked in a field near the bar, then beaten by several men.


​
The victim in the comments section acknowledged the attackers were all Obama’s sons:
Yes they were all black.

It was literally minutes later that I was trying to get in my car after talking to the first group that the attack started. When I tried to get in my car I heard “get the white boy” and when I turned around I got hit and fell.

I try and try to think about what they wanted from me, it’s like they wanted more then my wallet and my phone. I think they had originally planned on knocking me out cold in the first hit, throwing me in their SUV and taking me to my house to rob it. It’s the only logical reason I can think of that they wanted me completely knocked out, besides that they were playing that game.
​

WTF "Sons of Obama"? Someone pull this racist crap down please.

southtexaspilot said:
WTF "Sons of Obama"? Someone pull this racist crap down please.

Agreed, and he has a history of that around here.

Aint no need for this kind of stuff feller....

southtexaspilot said:
WTF "Sons of Obama"? Someone pull this racist crap down please.

How is that racist? It is a clear reference to what Obama said about Trayvon Martin, "If I had a son...." That bar/restaurant is near the UTSA campus. More crime there since they started their football program about 5 years ago. Wait, is that racist too? To point out that there is an epidemic of young black men assaulting people of other races. Pointing out that Obama identifies with these thugs and thinks the Crackers are getting what they deserve.

HillRider said:
How is that racist? It is a clear reference to what Obama said about Trayvon Martin, "If I had a son...."
Click to expand...

Breaking news: Martin is dead. And, BHO wasn't talking about the guys in the OP, it's racist!
H

Glockster69 said:
Breaking news: Martin is dead. And, BHO wasn't talking about the guys in the OP, it's racist!
Click to expand...

He was dead when Obama made the statement. What's your point? So the first amendment doesn't apply here according to you?

The only profile this incident fits is that it happened in San Antonio, after dark, and at a bar.

There is no victim here, just collateral damage from a population juiced up on drugs and alcohol, fueled by failed progressive Harvard-inspired political correctness.

HillRider said:
He was dead when Obama made the statement. What's your point? So the first amendment doesn't apply here according to you?
Click to expand...

1A doesn't apply here according to 1A .. lol. Nothing to do with me.

And my point is BHO wasn't talking about the guys in the OP, but now I'm just repeating myself, right?
T

Sooo why does the media want it to so badly be the knockout game...when the victim himself said there was a fight already going on before he even got near the group? And while there might be a conflicting report by the establishment, it's likely because they don't want people to think there's random fights at their bar.
You must log in or register to reply here.
Share:
Facebook Twitter Reddit Pinterest Tumblr WhatsApp Email Share Link