Squaring the face of an AR upper

Found this forum and this particular thread while looking for information on using a lathe to true up an AR-15 receiver.

The post(s) by 'bptactical' caught my attention. He confirmed my recent understanding that the lapping tools sold by several companies don't accomplish what they claim. They might smooth the mating surface for the barrel extension but do not square this surface to the axis of the receiver/barrel bore.

Had already been schooled on this by Joe Carlos, from YouTube. He has several videos there that are well worth viewing.

To make a long story short, 'bptactical' reinforced the direction I was headed in. Some 1" seamless aluminum pipe had been aquired, made of 6061-T6 alloy. This is the same material my Rock River Arms rifles are made of. I purchased a 1" expanding mandrel to hold the test piece and the RRA receiver: 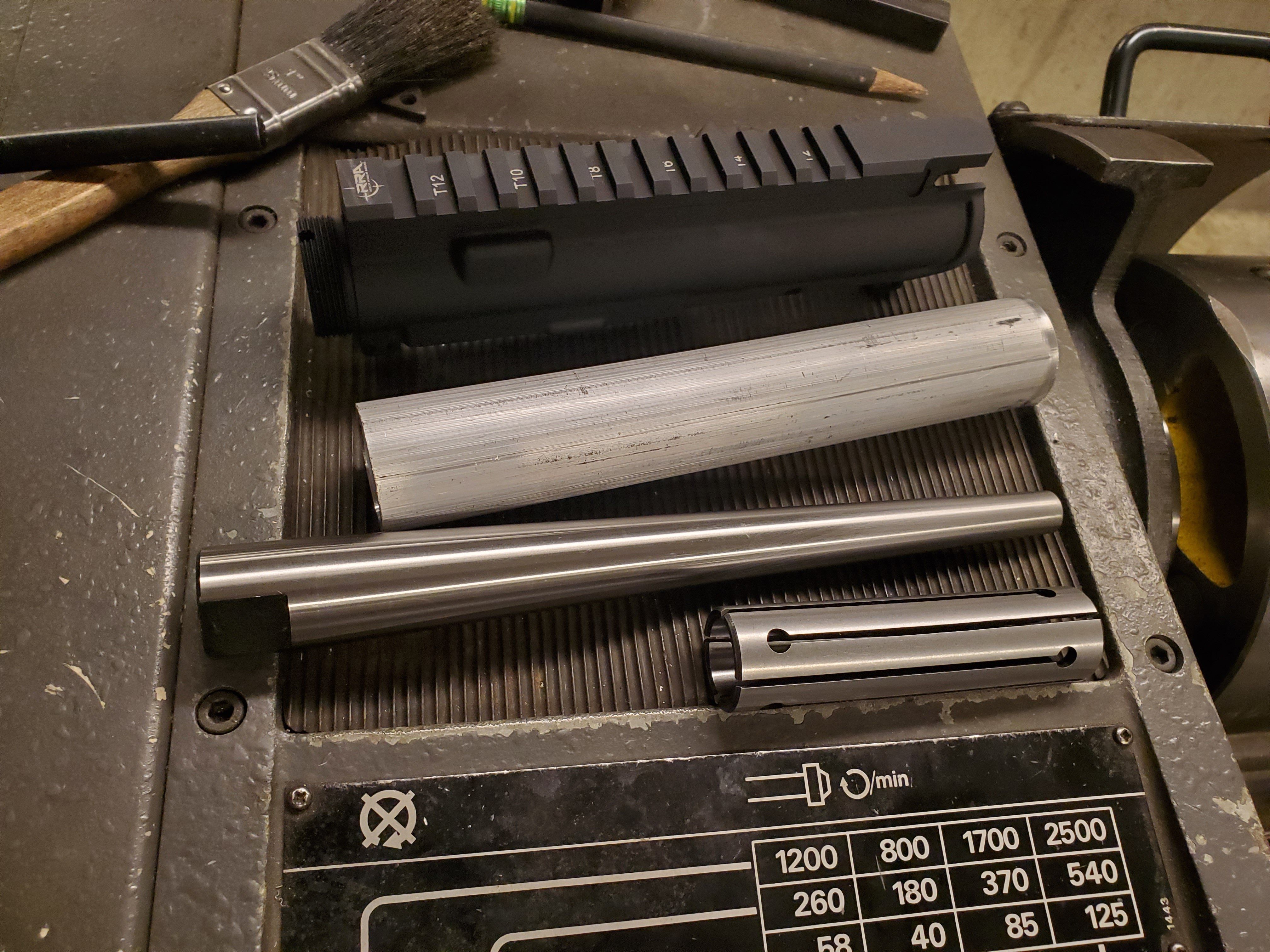 Using dial indicators, the test piece was mounted on a lathe and test cuts made: 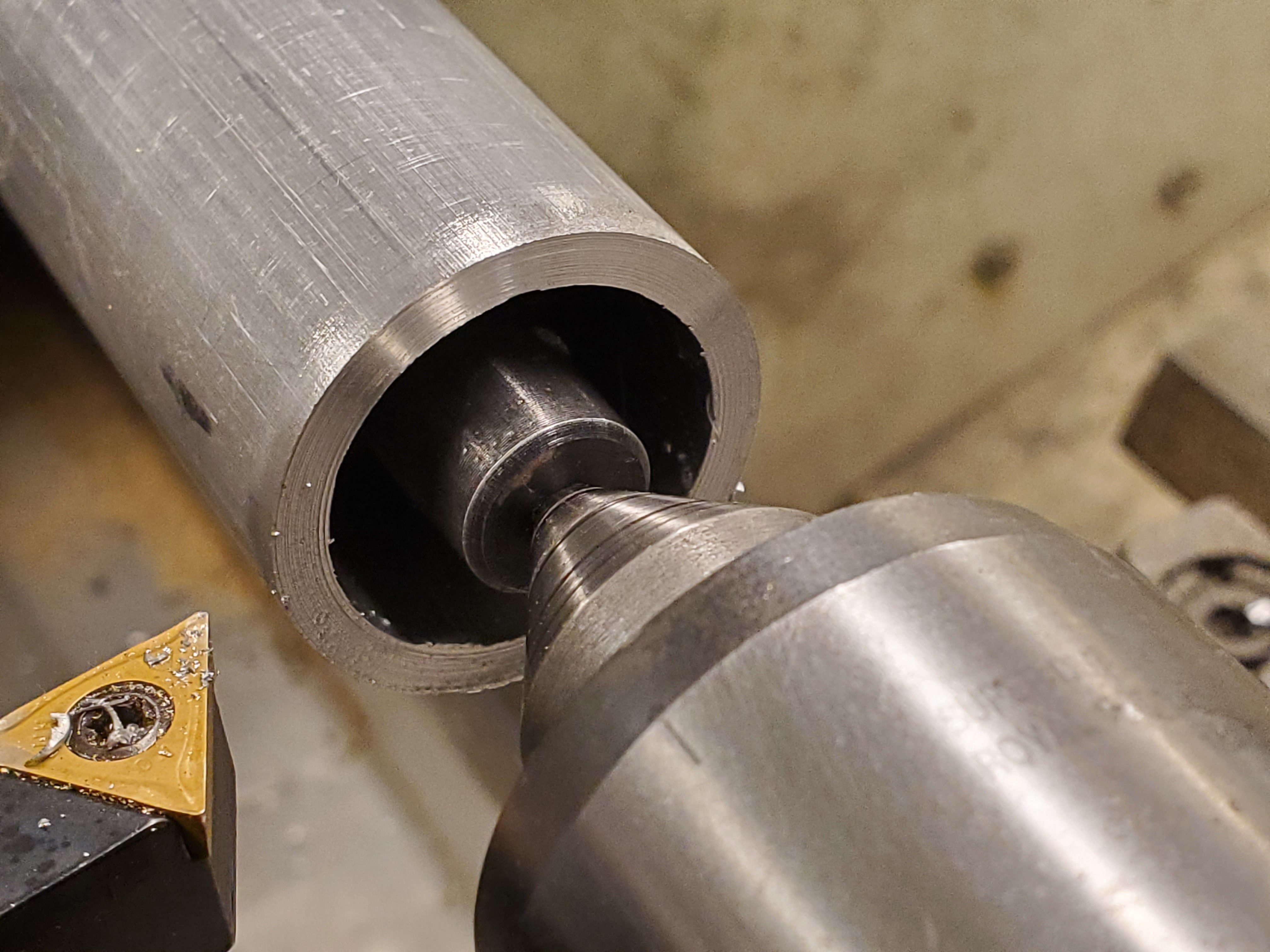 Satisfied with the results the receiver was carefully mounted on the expanding mandrel: 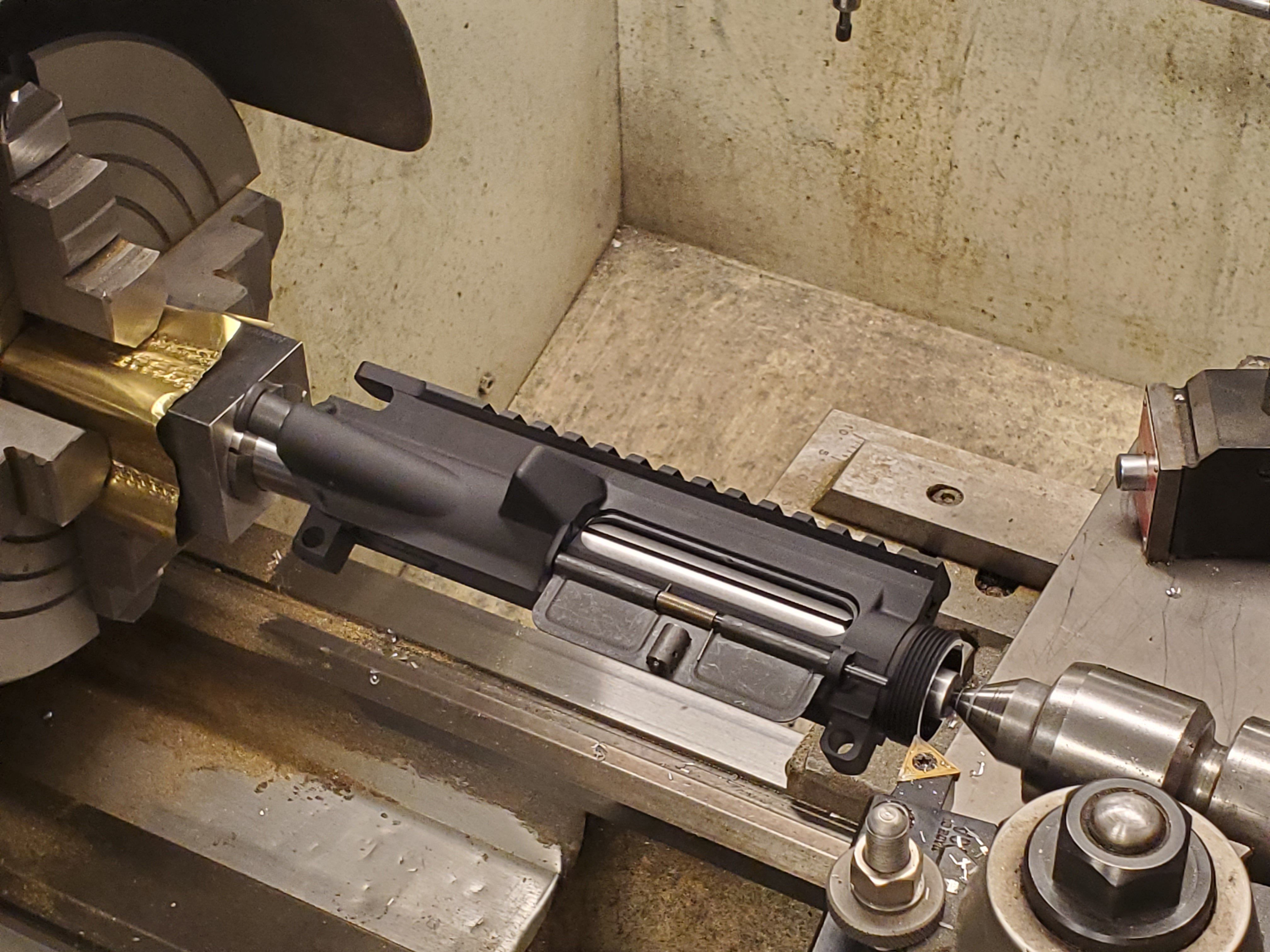 The facing cut was made: 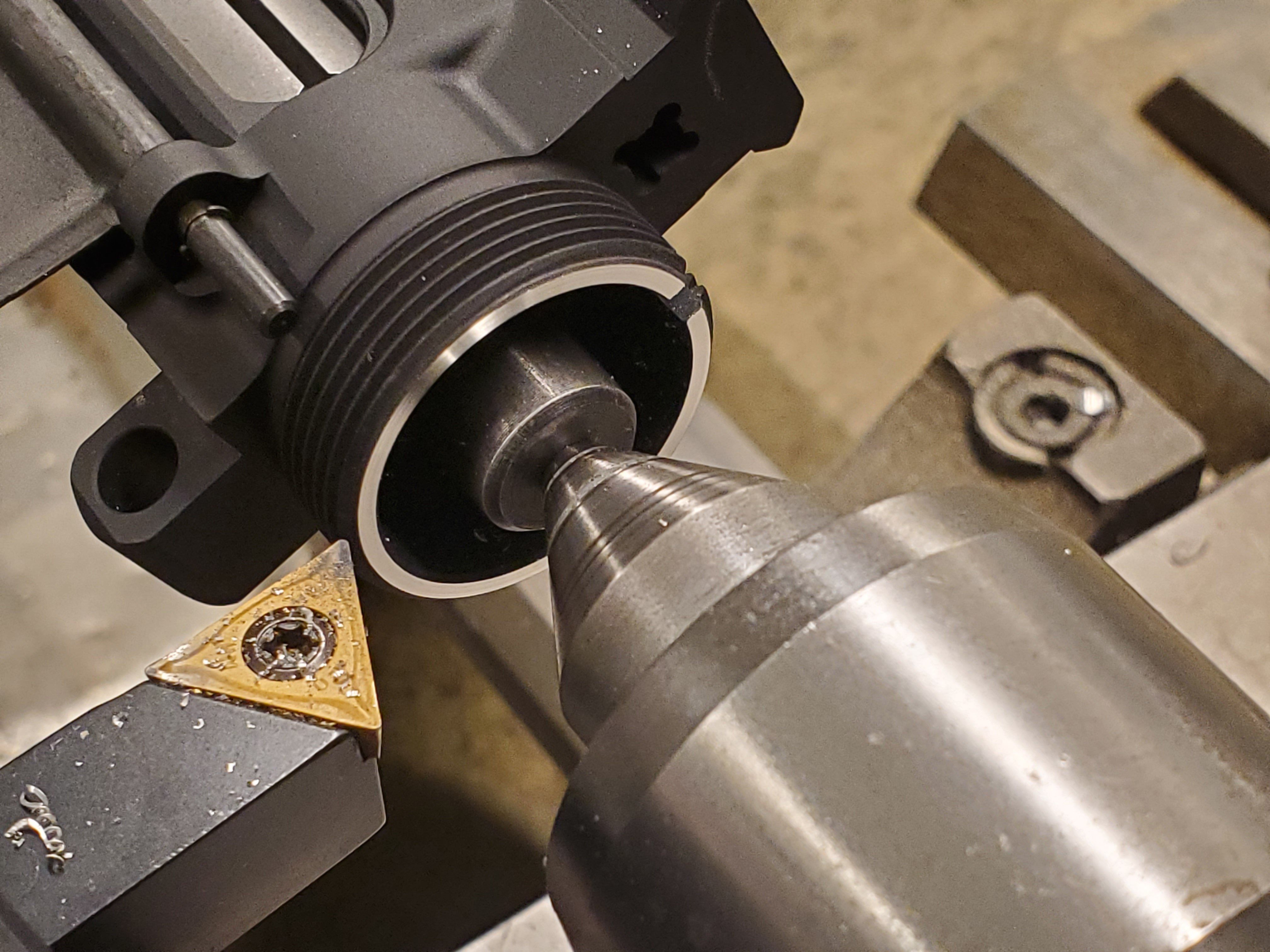 This is a spare RRA upper receiver. I will be rebarreling my match gun down the road with a Krieger barrel. Will give that receiver the same treatment and bed the new barrel with a shim as needed and green 620 Loctite.

I'm very glad to have found this forum and the information contained within.

This is the most productive necropost I think I've ever seen. Welcome to the forum!

^^^DITTO^^^
Make sure to provide update of the shimming and final.

I had to look that one up, looks like SQL nailed it.
Go to the front of the class.

Welcome to the forum, JMI!

Got the Krieger barrel install in my CMP/NRA High Power match gun over the last couple of days and went to the range this morning to see how it shot.

The disassembly of the Rock River Arms went fairly easy. I had talked to RRA in advance and they confirmed the web talk that on this particular gun they use “red” Loctite on the floated handguard/locknut. Got a Wagner electric heat gun and they popped right loose after heating them up.

Cut a strip of .001 inch stainless steel shim stock long enough to wrap around the barrel extension with just a small gap where to two ends met. Test fitted the receiver/barrel dry and it slipped over without much trouble. Then I “glued” the shim into place with green Loctite 620 spread lightly over the barrel extension and held in place with rubber bands for 24 hours.

Assembling the barrel to the receiver presented the only real problem. The Loctite I used was a thick, viscous liquid. My understanding is a thinner version is available. After removing the rubber bands and placing a thin coat of the 620 on the outside of the shim started to insert the barrel. By the time I considered it might be a good idea to back it out it became apparent it was not going to come out easy. It was about half way in, so the same distance either way. With the muzzle end of the barrel well cushioned by a folded towel on a carpeted floor and a thick piece of leather covering rear end of the receiver I used a soft hammer to drive, or persuade, which ever you prefer, onto the barrel. Believe me, I dodged a bullet there. If I was doing it again, I might consider the thinner Loctite, or heating the receiver, or maybe a thinner or no shim at all. Fortunately, the locating pin on the extension and the slot in the receiver where well lined up when I initially started. This episode remained in the back of my head until the test firing. One thing I knew. There was no movement in that barrel.

It took almost 4 hours to complete the break-in, what with the jaw-boning and cease-fires of everyone else at the range. By then I was chilled and tired but needed to have an indication of the accuracy. My rifle, by match rules, is limited to 4.5 magnification. That is by no means benchrest horsepower. I shot the one group with Black Hills 52 grain Match HP. That is a 8 shot group. Under the circumstances I am more than satisfied.

I’m certain the gun can do better.

Thanks for the update.
It would be interesting to see the results of a comparison of hand lapping vs lathe truing with your expanding mandrel.

Went back to the range yesterday to try a few more brands/weights of ammo. There where several brands of inexpensive 52-55 grain ammo that did not do well.
Shooting a couple of brands of "match" ammo, both 77 grain loads, was very satisfying. But then is a 1 in 7.7 twist meant for heavier bullets. Shot a 5 round group with both loads, Fiocchi and Creedmoor.

The Fiocchi produced a 5/8" group while the Creedmoor shot a 1/2" group.

I'd like to be able to shoot more groups with this ammo but it is impossible to get more under the current circumstances. It is for match shooting come spring time.

Now if I could only shoot groups like that from position...