take a nap in a tattoo studio

wake up with a constellation
Teen sues over face tattoos, says artist put extra star tattoos on her face while she was sleeping 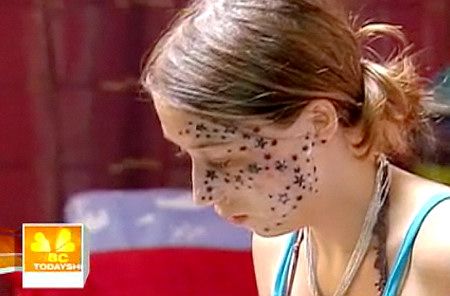 A botched tattoo has one teen seeing stars.

A horrified Belgian woman woke up in a tattoo parlor with 56 stars covering the left side of her face, after, she claims, she only asked for 3, The Daily Mail reports.

Although Toumaniantz maintains that Vlaeminck asked for all 56 stars and he has the witnesses to prove it, he is willing to split the cost of removal.

"Kimberley is unhappy and it is not my wish to have an unsatisfied client," Toumaniantz said. "There is a way to remove the tattoos with the help of a laser. I accept to pay for half the cost."

Toumaniantz insists that Vlaeminck left his shop happy and satisfied with the job he had done decorating her face. She only started complaining after her father and her boyfriend saw her and were horrified, the Daily Mail says.

Vlaeminck blames the language barrier for the mess up. She asked for the three stars in French and limited English, and she says Toumaniantz didn't understand her.

But the tattoo artist maintains he understood her perfectly.

what a load of BS, for those of you who've never gotten inked, let me tell you, IT FUCKING HURTS! And I've never done anything as stupid as get one on my face, I can only imagine. Also, they're not cheap, nor quick. The idea that someone would be so irresponsible morally and fiscally to just plaster some poor girl with a multitude of stars, is preposterous. Even if he does look like this: 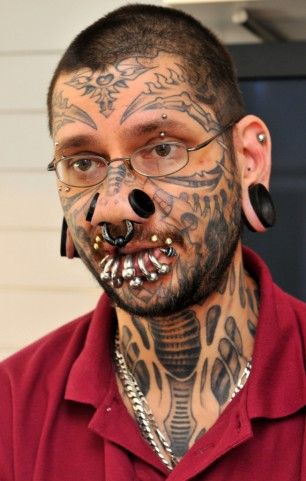 Yep, I don't buy that she was asleep during the addition of 53 extra stars...

Although I would have to be if I had to look at that guy for that long.
B

I have not fallen asleep threw either of mine. And yes some hurt the one on my chest/collar bone hurt like a MFer but the one on my arm was good and numb after the first 30 seconds. But on the face! You would have to be passed out COLD not to feel that. And I mean from drinking a bottle of whiskey.
D

most times, people are drunk or high or both when they get their tatoos
no telling how many stars she asked for
and may explained why she fell asleep/passed out
T

3 sounds alot different than 56 in just about every language out there. Even if he only spoke broken English and Romanian, he'd understand the difference. Romanian is a Latin derived language.

He's not going to mix that up.
T

She woke up with a case of the AWWW SHITZZZZZ and said what do I do now.
B

tmd11111 said:
She woke up with a case of the AWWW SHITZZZZZ and said what do I do now.
Click to expand...

Yeah, it happens. I think you are right, no tattoo artist is going to do all that extra shit for free either, so she had to have paid for it at some point.
B

How does that dude even breath threw his nostrils? I've had a piercing and took it out. I have no idea how I could stand that much stuff hanging off of my face. I like the tat on his throat tho.
T