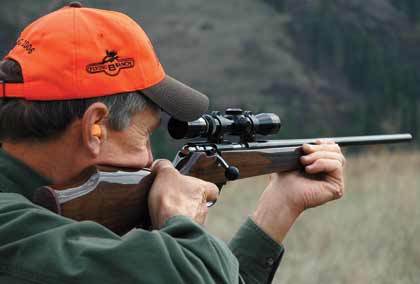 In East Africa you hear hunters talk of four-five-eights and the three-seven-fives. They’re mighty cartridges, for game that can trample you or pick you up in its mouth. “But you shoot too seldom when every pull of the trigger costs you a couple of bucks,” concedes one PH. His .416 solids have the dull patina of old oak where loop leather hasn’t turned them green. “When I practice, it’s with the two-two.”

The .22 rimfire had an unlikely start. In 1849 inventor Walter Hunt earned a patent for his breechloading Volition Repeater. But he lacked money to develop it. Fellow New Yorker George Arrowsmith chipped in cash and business savvy, hiring skilled gun mechanic Lewis Jennings to troubleshoot the rifle. Arrowsmith later sold it to Courtlandt Palmer, a New York hardware merchant. The Hunt-Jennings rifles sold poorly at first. Then Horace Smith and Daniel Wesson became involved. Wesson had studied the work of French gun designer Flobert and suggested using Flobert’s pistol ammunition (essentially a ball atop a primer) in the Hunt-Jennings. A longer case would hold powder, making the cartridge practical for rifles.

With Palmer’s backing, Smith & Wesson developed several cartridges, adapting some to pistols. Late in 1857 they came up with what we still know as the .22 Short. Its case was fashioned then much as it is now: A disc punched from sheetmetal was drawn into a tube with one closed end. A rim was “bumped” onto that end, the fold filled with fulminate of mercury. This fulminate exploded when a striker or hammer crushed the rim against the chamber lip. While revolvers later made Smith & Wesson famous, the company’s .22 Short cartridge proved a huge contribution to the firearms industry. Its most celebrated offspring was the .22 Long Rifle, courtesy of the J. Stevens Arms and Tool Company, circa 1887.

The smallest .22 rimfire is the BB Cap (BB for “bullet breech”). It is essentially the Flobert round. Intended for indoor target shooting, BB Caps launch 16-grain bullets at 750 fps, for a muzzle energy of 26 ft-lbs. Conical bullets replaced the original ball before U.S. firms dropped this cartridge, but it still packs only one-fifth the energy of a .22 Long Rifle.

The .22 Short initially contained four grains of black powder. In 1887 it became available with semi-smokeless, to be followed shortly by a smokeless loading. Remington announced Kleanbore priming for the .22 Short in 1927, several years after German cartridges featured Rostfrei (rust-free) non-corrosive priming.

When I was a shy lad ogling gingham skirts at county fairs, I lost stacks of quarters trying to chew diamonds out of cards with Remington pump rifles so I could win a teddy bear, then a girl. I found that three .22 Short bullets cannot cluster on one of those diamond targets without missing a corner. And those teddy bears sat untouched for months 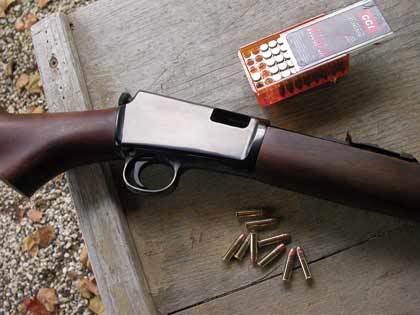 Warp-speed plinker: The Winchester Model 63 auto was cataloged from 1933 to 159. This one is a replica.

Some shooters think the .22 Long resulted when the Long Rifle case was married to the Short bullet. In fact, the Long predated the Long Rifle by l6 years. The Long’s original loading of five grains of black powder gave its 29-grain bullet a little more sauce than the Short. High-speed loads for the Long now propel bullets downrange at 1,240 fps, generating 99 ft-lbs. The Long bullet shares with the Short a ballistic coefficient of .083, abysmal when compared to hunting bullets in centerfire cartridges.

Proliferation of special-purpose Long Rifle loads for hunting and competition has all but killed off the .22 Long. Remington offered the first high-velocity Long Rifle load in 1930. For decades now, the most popular .22 Long Rifle ammo has pushed 40-grain solids at about l,335 fps, for l58 ft-lbs of muzzle energy. That’s twice the punch of the .22 Short, half again as much as that of the Long. The Long Rifle bullet flies flatter than both. Oddly enough, its highest speed is reached in barrels about 16 inches in length.

Other .22 rimfires include the .22 Remington Automatic, developed in 1914 for that firm’s Model 16 autoloading rifle and discontinued in 1928. Like the similar .22 Winchester Automatic, produced until 1932 for Winchester’s Model 1903 self-loader, it fired a 45-grain, inside-lubricated bullet. As both cases had to be bigger in diameter than their .222 bullets, they couldn’t be chambered in guns bored for the Short, Long or Long Rifle. The Automatic rimfires arrived shortly after other .22s had been loaded with black and semi-smokeless powder. Their greater diameters ensured that shooters wouldn’t gum up autoloading rifles with old ammo.

While .22 Automatics were mild rounds, clocking 1,000 fps, the Winchester .22 WRF manufactured for the company’s Model 1890 pump rifle fired its 45-grain solid and 40-grain hollowpoint bullets at 1,450 fps. Case length was .960--half again that of the Automatics and the .22 Long Rifle. An inside-lubricated bullet made for a fat case and a chamber too big for other .22 ammunition. Remington fashioned an interchangeable cartridge (with the WRF) and called it the .22 Remington Special.

Winchester’s .22 Magnum Rimfire, introduced in 1959, offered significantly more power than earlier .22s. Essentially a .22 WRF case stretched to 1.052 inches, it launched a 40-grain jacketed bullet at 2,000 fps. The .22 WMR has trundled along steadily but, partly because of its cost, has never threatened the .22 Long Rifle at market. In 1977 CCI had a better idea. Its hyper-velocity Stinger boasted a longer case but the same overall length as the Long Rifle, and its 32-grain hollowpoint bullet reached 1,680 fps. Winchester soon brought out the similar Xpediter, Remington its Yellow Jacket.

In time, the .22 family of rimfires would include the .17 HMR on the WMR case and the .17 Mach II on the Stinger case. With pointed, polymer-tipped bullets scaling just 17 grains, these hyper-velocity cartridges shoot both flatly and accurately. Neither will redefine the .22-caliber line started 150 years ago.

The .22 is more than a cartridge type or a small rifle. It’s an American icon. The two-two has fed our pioneers, trained our soldiers, brought us glory in Olympic games and taught our youth to hunt. It now spans a 150-year slice of American history.

Links and References to Other Pages:

El Paso (That's in Texas too, ya know)