Sir John Bagot Glubb. Army General and historian, he studied eleven empires starting with the Assyrians in 859 B.C. and ending with the British in 1950 A.D. He determined that each followed a remarkably similar pattern from birth to demise. Spanning a period of about ten generations, each went through 7 Stages of Empire:

And what marked the penultimate age? Defensiveness, pessimism, materialism, frivolity, an influx of foreigners, the Welfare State, and a weakening of religion. To what did he attribute this decadence? Too long a period of wealth and power, selfishness, love of money, and the loss of a sense of duty.

Sir John Glubb, better known as Glubb Pasha, was born in 1897, and served in France in the First World War from 1915 to 1918. In 1926 he left the regular army to serve the Iraq Government. From 1939 to 1956, he commanded the famous Jordan Arab Legion. Since retirement, he has published sixteen books, chiefly on the Middle East, and lectured widely. He died on March 17, 1986.

He authored the book "THE FATE OF EMPIRES and SEARCH FOR SURVIVAL" which can be downloaded at the link below. 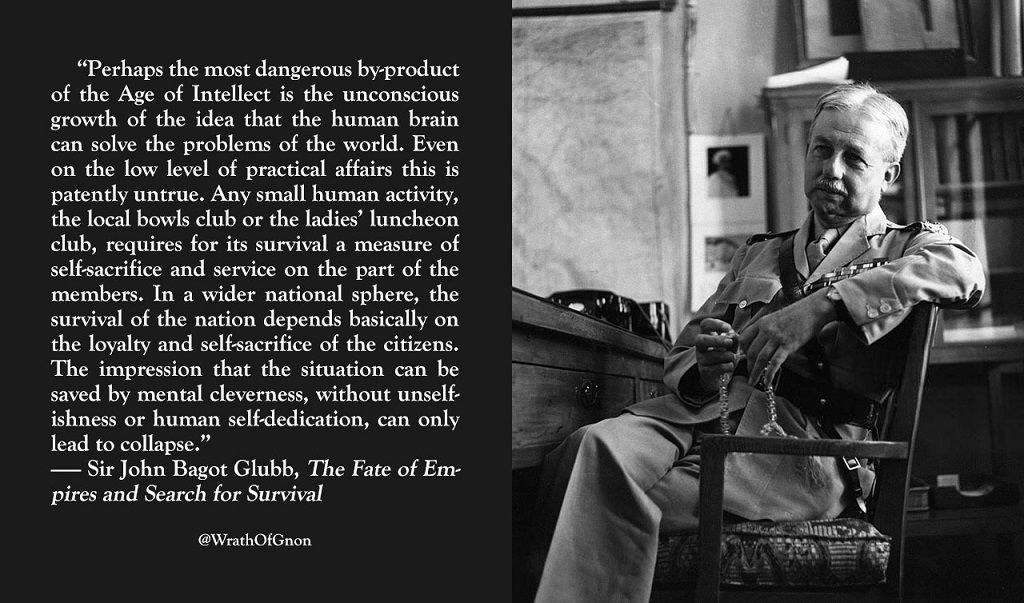 It’s a pretty good read. I’ll grab it again, thanks.