Trying to decide on which is better for the average night time hog hunter who will be hunting various properties. This will be a 1 and done set up used for scanning (attached to the gun) and shooting on an AR10 .308 18” (yes I know it will be heavy lol).
I really like the idea of the 12 micron core in the Thermion. And I think I would prefer the 2.5x native zoom on the Thermion over the 1.6x native zoom of the Trail 2. I realize that the Trail 2 comes with a very accurate laser range finder, and has better battery life. I’m hearing a lot of hype around the Trail 2 though over the Thermion, and I can’t figure out why. I would think a 2.5x native zoom with a 12 micron core would produce a better image overall. Yes the Trail 2 would be better for scanning, but isn’t a 2.5x magnification a good sweet spot for compromise between identification, scanning and shooting?

Is there something else with the firmware, features, capabilities or anything else that I’m missing from either of these scopes? And does the12 micron XG50 Thermion produce a noticeably better image than the 17 micron Trail 2??

Thanks in advance! Hope y’all had a great turkey day.

Sent from my iPhone using Tapatalk

It's been about a year since I did my shopping but it seems folks in the know preferred the Trail. Battery life trumps fancy colors for one.

I ended up with a Trail XP-50 and love it. The 1x6 doesn't bother me and I rarely even think about my battery.

FireInTheWire said:
I wouldn't go over 2.5x... unless you have a scanner. I wish I had the 60mm 4x until I go out hunting and realize just how much FOV the 2.5x has. I'd break my neck looking around with the 60mm 4x FOV.

Yeah I really like my 2.5x 35mm Reap-IR. 1.6x just seems a little low on the magnification for identifying and shooting at any further night distances.

It’s my understanding they’re having some issues getting the new 12 micron core and it’s other features to play nice with the new Thermions. I’m thinkin that’s why it isn’t more popular yet.

I have the pulsar trail xq50 at my first thermal scope but it is definitely worth the money. The low end zoom is 2.7 which kinda sucks when you wanna see much closer but the 10.8 zoom is nice when trying to get a good look at something further away. Overall great scope but probably out of date by now

roygarcia54 said:
I have the pulsar trail xq50 at my first thermal scope but it is definitely worth the money. The low end zoom is 2.7 which kinda sucks when you wanna see much closer but the 10.8 zoom is nice when trying to get a good look at something further away. Overall great scope but probably out of date by now

My brother in law had the trail xq50. I likeD the magnification for shooting. It was a little too narrow of a field of view for scanning IMHO.

The most recent firmware update has made the image on my trail XQ38 noticeably better.

Also, I’ve noticed that what Pulsar claims as their base magnification, would not be equal to what a trijicon claims as its base magnification. My buddy got the new Trail 2 scope and we compared my Reap-ir (“2.5x magnification”) to his trail 2 (“1.6x magnification”) and they were practically identical in terms of magnification and field of view. I find that to be noteworthy for anyone considering what magnification to go with on a thermal. It also makes me like the Trail 2 2x 640 a lot more. $1500 cheaper to gain internal video recording, streaming WiFi, long lasting rechargeable battery pack, no need to close the lens to Nuc the image and the only thing you really lose is a slightly less clear image.
Anywho. Just my two cents. That trail 2 is looking pretty nice to me now

Sent from my iPhone using Tapatalk

roygarcia54 said:
I have the pulsar trail xq50 at my first thermal scope but it is definitely worth the money. The low end zoom is 2.7 which kinda sucks when you wanna see much closer but the 10.8 zoom is nice when trying to get a good look at something further away. Overall great scope but probably out of date by now

Actually, 2.7 is right in the range of the sweet spot of native magnifications. Much less and you don't get enough zoom. Much more and you have a terribly narrow FOV. This is critical because zoom is digital, not optical.

By and large for the money, the Trail XQ50 was about the best package you could get at the time from Pulsar. The XP50 cost a lot more and had a wider FOV on native 1.6 magnification, but when zoomed to the same level, both scopes had comparable resolution

I’ve only had this scope for a few months I Bought it second hand for 3k it’s my first ever thermal so I don’t really know what other features come with different scopes. I’m not sure what brand is the best and I’m sure there’s always gonna be better technology coming out every year but I can honestly say for the applications I use it for this scope suits my needs pretty dang good but keep chiming in I wanna get some free advice on what my next purchase could be.

When I first got the scope I would leave it running and I think the warmer that the scope got it would get these vertical lines in the display. They would at times get so bad I could hardly see. But after messing with it for a while I noticed if I pressed the power button once the screen would reset and become clear again. It still operates that way and I can tolerate it but I found it weird that it was doing that so often. I posted a pic so you could see how bad it would get. But one press of the power and its crystal clear again it’s not always that bad but it would happen often before I learned that trick 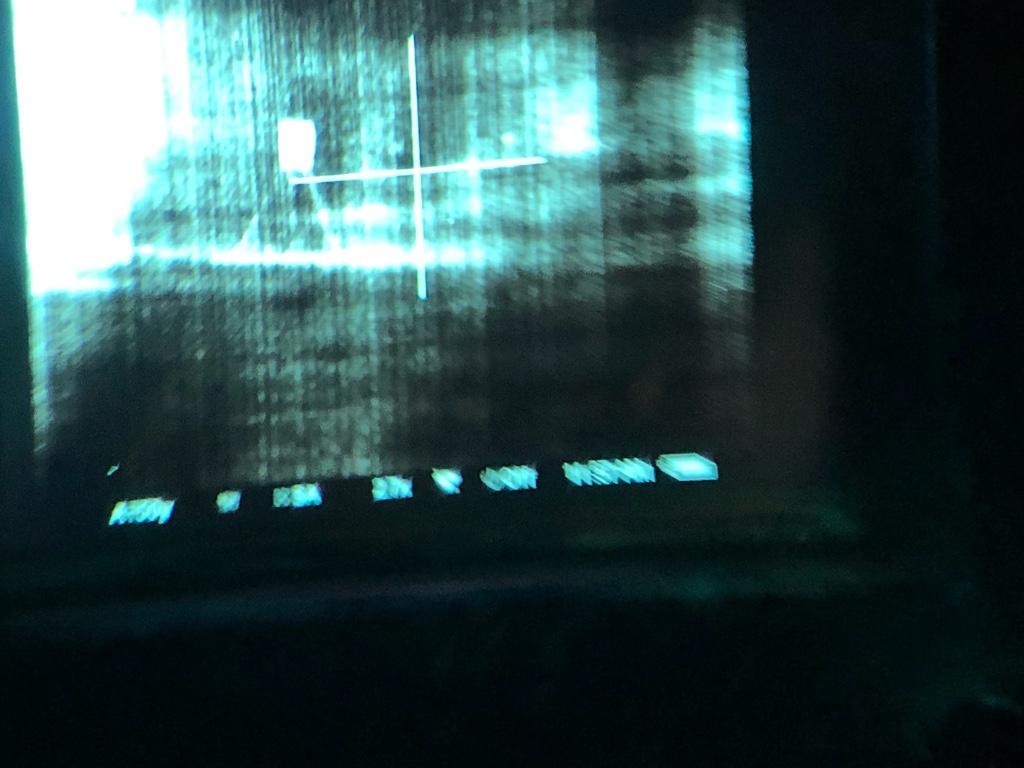