Hello. To say that semiautomatic handguns and rifles are more popular now than ever is a pretty safe statement. The semiautomatic handgun has pretty much replaced the tried-and-true revolvers that graced law enforcement’s holsters decade after decade and those of many defense-oriented private citizens as well. Other than hunting and some competitions designed with the “round gun” in mind, “electric guns” dominate most handgun sports…or so it seems.
On both television and in printed media, I continue to hear and read that the AR-15 style semiautomatic rifle is the most popular in this country, seemingly selling as quickly as they can be manufactured. I think this is a true statement but I have not personally even tried to document it, so those who always squeal for such will be disappointed in this article. Rather, I will simply suggest that the AR-15 platform is a very fast-selling item and a design manufactured by many makers, sort of like 1911-pattern pistols continue to be!

Many will agree that one of the autoloader’s major strong points is its ability to be quickly reloaded in practiced hands. Skilled users can reload their detachable magazine-fed handguns and rifles, sometimes with nearly unbelievable speed, the result of much dedicated practice but also testament to the semiautomatic’s design…and making the most of it.

…and that brings us to the topic at hand: magazine carriers.

If we are to quickly reload a semiautomatic firearm having a detachable magazine, we have to carry at least one extra magazine on our person and in a manner that allows us to efficiently retrieve it. To this end, a number of companies offer magazine carriers intended for clandestine, concealed carried, open carry, or competition, or are meant for use under the harsh environments in some military situations. We find magazine carriers made from traditional leather to kydex or other synthetics.

Let’s take a look at a couple from Tuff Products. Both were designed by master firearms photographer and shooter, Mr. Ichiro Nagata. Mr. Natt Stevens of Tuff Products advises that Mr. Nagata originally envisioned both carriers to be used by everyday shooters but adds that some are being purchased by both military and SWAT patrons. He also provided the following information:

"Ichiro Nagata is famous for his Firearm Photography and is also a real active shooter in the Bianchi Cup and was the 2008 Steel Challenge Super Senior Champion.

He has worked on this 8 Round Magazine Pouch for just over 5 years to get to this final design that he is very happy to put his name on. Original design was bulkier made only open top for competition. Had only 5 pockets and he would put 2 magazines in each pocket holding 10 magazines. Thru the testing with prone shooting positions he discovered the need of separate pockets for each magazine as well as a flap to cover them to help keep the magazines in the pouch. This is where the removable flap came into play. Final testing was done at the recent Bianchi Cup where Tuff Products sponsored Team Japan to put the pouch to the test prior to the product launch.

Ichiro would need 5 Magazines for the Steel Challenge and would need 8 magazines for the Bianchi Cup to carry 48 rounds without putting too much tension on his magazines to reduce the chance of a pistol malfunction. This is where the amount of magazines where chosen to hold 8 magazines. Throughout the testing of this pouch at the Steel Challenge and Bianchi Cup, Ichiro had talked with many people and he felt adding the M.O.L.L.E. attachment to this pouch would make it very useable for anyone that shoots a 1911."

First up is their “8 in Line Magazine Pouch”. It can be had in black or coyote brown and is available for single-stack 1911-style magazines. It appears capable of lots of use and is constructed of 1000 denier cordura and mil-spec webbing. This carrier can be worn on the belt but is also designed for use on M.O.L.L.E.-style vests. (“M.O.L.L.E” stands for “Modular Lightweight Load-carrying Equipment”.) The “8 in Line Pouch” is more compact than might be initially expected. 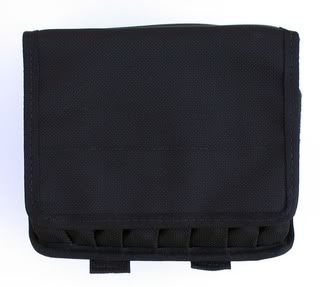 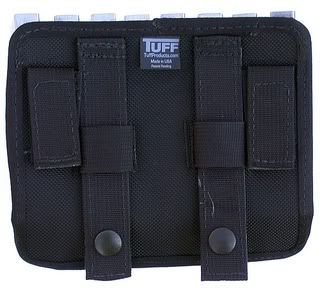 Here is the “8 in a line” magazine carrier loaded with 8 1911 .45 magazines as it appears from the front (left) and showing how it can be attached to either a belt or M.O.L.L.E. vest on the back (right).

This is due to the magazine not being carried with its side against the belt. Rather the rear of the magazine in closest to the body. Thus, the length of this carrier can be a compact 6 ½” long by about 5 ½” high and right at 1 7/8” thick. Though it could be done, I do not believe that this magazine carrier was ever envisioned for concealed carry. Even so, from the front it would probably not be readily apparent to non-shooters what it was with the full-length, velcro-secured cover in place. (This cover is removable by the way. It also has a wide enough swath of velcro that it will fit tightly against magazines with or without magazine pads.) 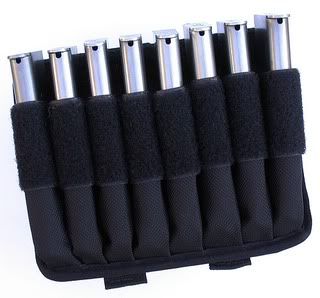 With the cover removed, we can see the nicely secured line of eight magazines. Note the relatively wide swath of velcro on the front. This provides quite a bit of latitude in overall magazine length vs. the cover fitting properly. If you use magazines without bumper pads, the cover will pull down and be hold them firmly in place via velcro. If you prefer to remove the cover for quicker access, snug fit and relatively high coverage of the magazine by each pouch insures that it stays in the carrier until manually removed. That they are held with the rear of the magazine toward the body rather the magazine side as with most single and double carriers did not prevent rapid removal of the magazines for quick reloads. It did “feel different” because of my using traditional magazine carriers for years but it just did not prove to be a problem. 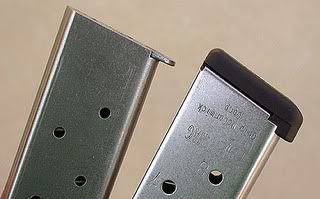 The LOA of the 1911-type magazine makes no difference whether or not it will be held securely; it will be.

Next up is a compact magazine pouch for carrying a single AR-15/M-16 magazine. It can be carried via belt or the previously-mentioned M.O.L.L.E. vest. It has no cover but tension holds the magazine firmly in place. This pouch could easily be carried concealed should that be of importance to some people reading this article.

Tuff Products calls it the “G.A.G.”, which stands for “Grab and Go”. 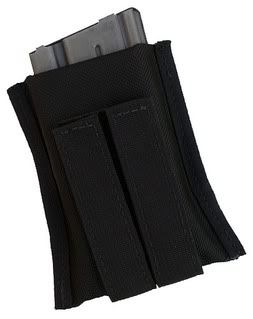 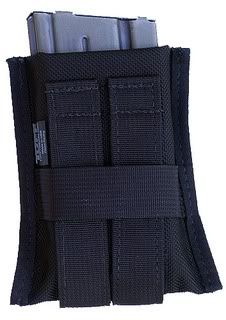 On the left, we see the “G.A.G”. carrier from the front and only the left, from behind. Like the “8 in a Line”, this pouch attaches very securely to the belt. (The only AR-15 magazines I had close at hand were the shorter ones holding 20 rounds. In the pictures, the magazine is pushed all the way down. It is still very easy to retrieve.

With 8 loaded magazines (7 rounds of 230-gr. 45 auto each) in the “8 in a Line carrier”, I removed the detachable cover, and held the carrier upside down. I shook it and no magazines could be shaken out of this pouch. At the same time, removal by hand was absolutely not difficult at speed. (While empty magazines can be inserted one-handed, I did not find that to be as quick as with either heavy leather carriers of those of kydex-type synthetics. I was surprised that it could be done at all, much less as easy as it proved to be and for many this is not even an issue.) 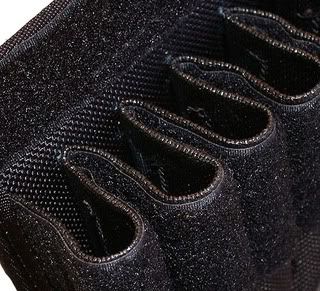 The edges at individual pouch openings are designed not to fray and I would expect years of use from either of these magazine pouches.

With the “G.A.G.” single magazine carrier, inserting a magazine one-handed was very easy to do, even though the magazine is held securely in place by tension between it and the carrier. 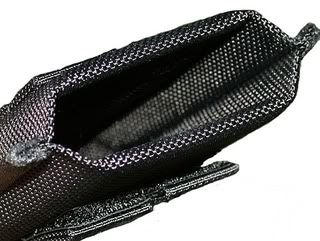 The “G.A.G.” pouch would allow carrying an AR-15 magazine easily for use in a match or in the open as well as concealed for more “serious” scenarios.

I am very favorably impressed with both of these carriers. If you think that you might be, take a look at www.tuffproducts.com and then under “Magazine Pouches” for more information and pricing, not only on these, but their “5 in a Line” carriers for 9/40 double-stack magazines as well as a selection of single magazine pouches. They can also be reached via telephone toll free at 877-883-3776.

Nice review. Thanks for posting that. The 8 pistol mag pouch is pretty cool. I'm going to have to get one of those as well as their 5 double stack mag pouch too. One can never carry too many pistol mags.

Sig_Fiend said:
Nice review. Thanks for posting that.
Click to expand...

Sig_Fiend said:
Nice review. Thanks for posting that.
Click to expand...

Hello. Thanks very much. I am glad that the article was of interest.

Nice review, Now I will have to get a couple of those.
D

I'm going to have to put one of those 8 mag pouches on my plate carrier.