What would be your bottom dollar.

Here are 3 screen shots of my conversation with a guy on the FL Gun Trader FB page about the gun. Is this guy an idiot or am I being unreasonable?

What do you guys feel would be your bottom dollar if you were the seller? 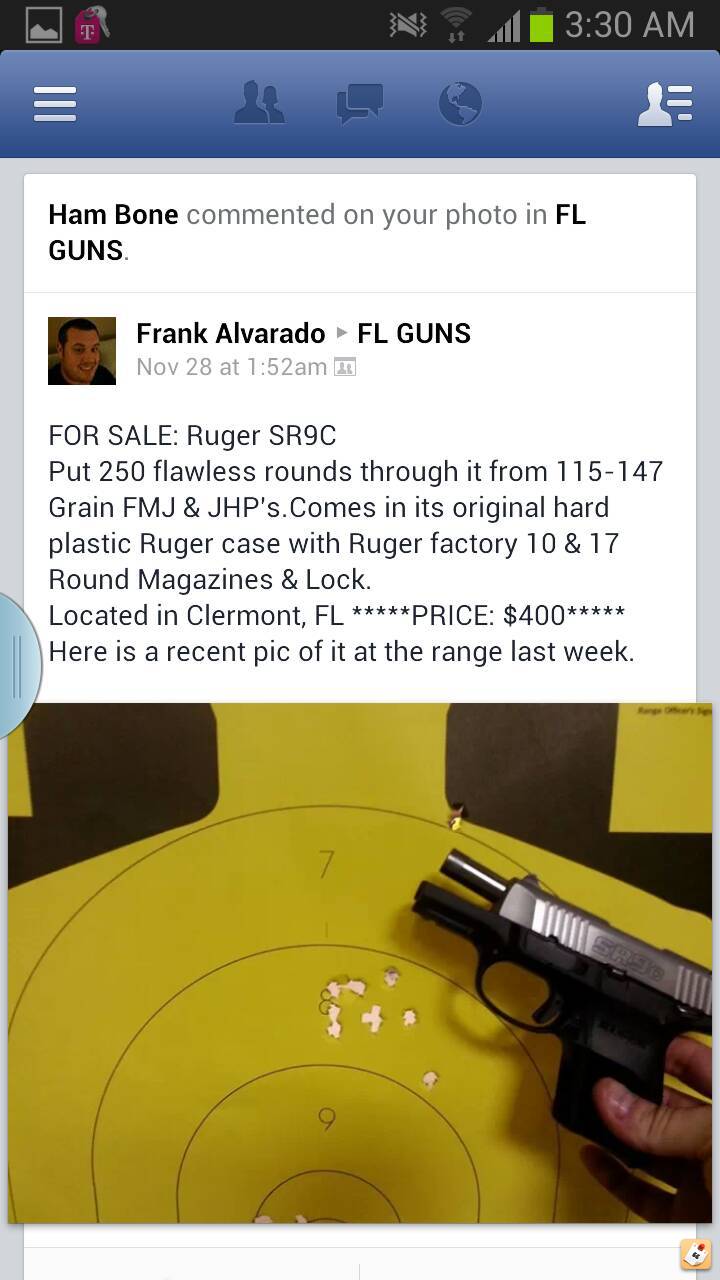 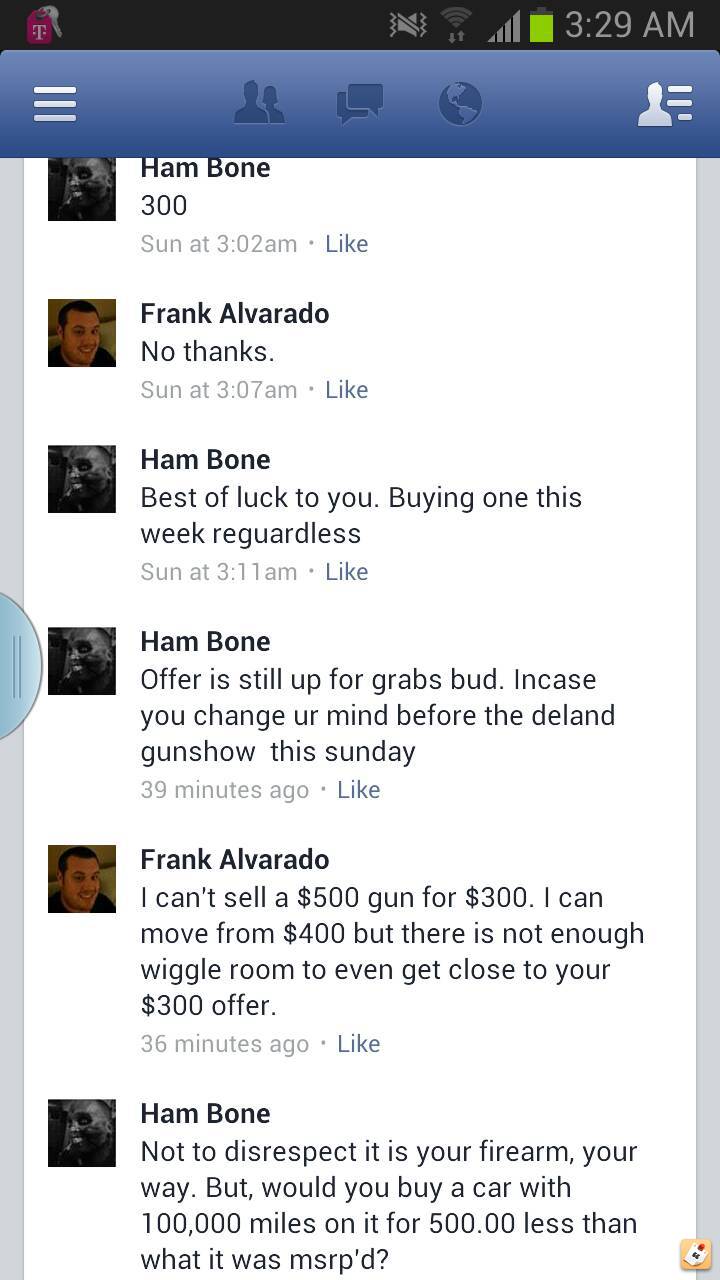 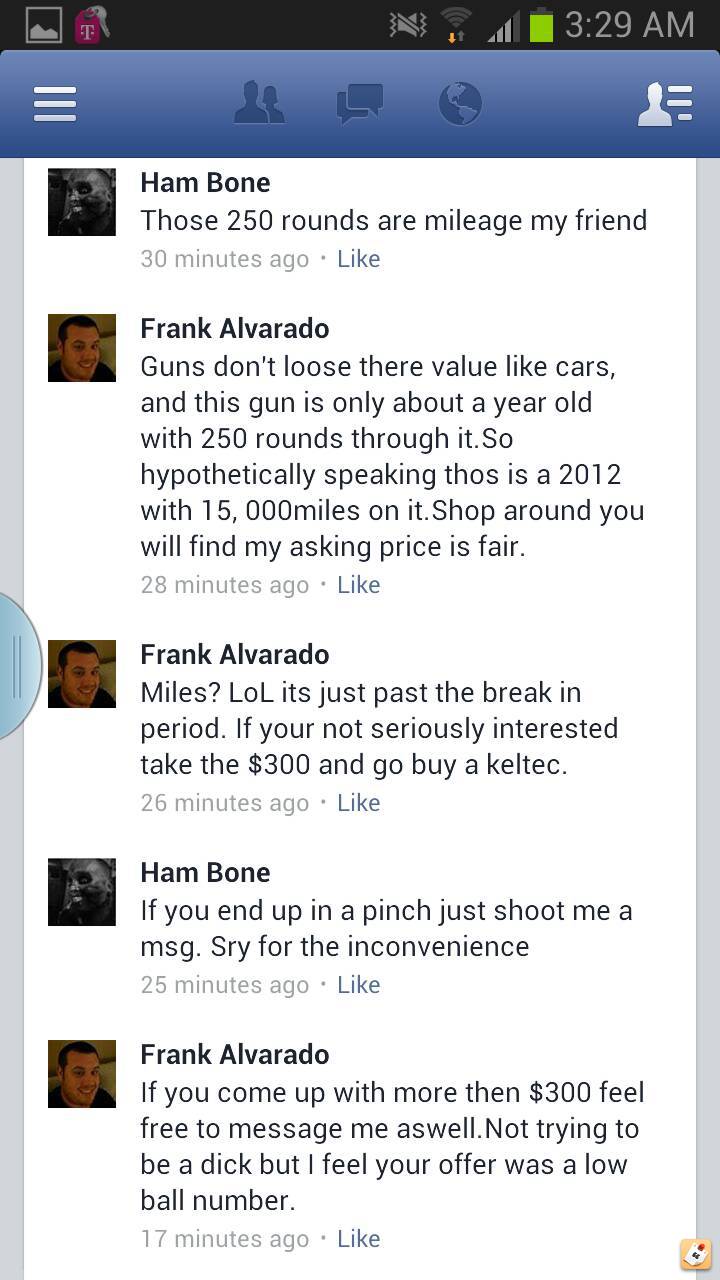 You're right that guns don't lose their value like cars, but that doesn't mean people will pay close to retail price for a used gun, depending on the gun. For example, full sized M&P's are 500 dollar guns, but re sell for 400 most of the time. That's a hundred bucks off of a really good pistol and I've seen cases where they weren't ever used.

As stated, I think you both are being reasonable in that the buyer will want to start low and the seller would want to start high. The only thing I see that is keeping this from a fair deal, is the lack of haggling. I would have responded with something like, "Can't do 300 but I can take it down to 385". THEN, if he doesn't want to haggle, tell him to F off. If he came back with 340, I'd reply 380, let him go to 350, and put my final offer at 375. If he was willing to come up to 360 365, I'd probably let it go.

In conclusion, I think you over value the gun just a little and he under values it a little too much. Add in the haggling factor and I'm sure you can both agree on a number that you're both happy with. Just remember, the FFL transfer fee that you may have paid if you ordered this online, should not be factored in to the actual value of the gun. Good luck with your sail. Are you funding another firearm? If so, which one?

If it helps this is what two decent LGS have them advertised as by me. I paid $399.00 at a gun show lat November 2012. Then the panic buying started. now prices have settled back some. 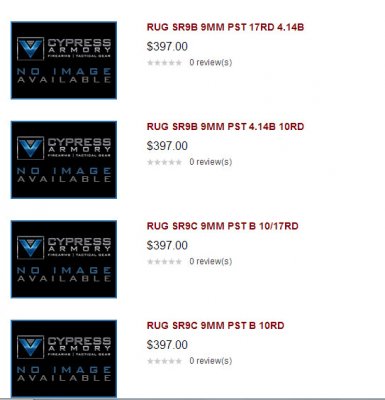 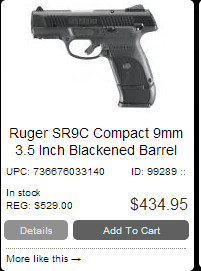 JColumbus pretty much nailed it. I would probably go down to $350 because for $50 more I would go buy new.

I think Ham Bone will be back. I don't think he is going to have much luck waving his $300 around unless someone selling really needs the cash.

To be frank, quoting MSRP is just as ridiculous as a $300 offer.
You have it priced ($400) at about retail and no one will purchase used when they can purchase new for the same price, unless there is a "reason" to do so.

Brand new in Clermont for 427 including tax and fees. I personally won't give more than 75% of new for anything used. My top dollar offer for your pistol would therefore be $320.
Just my .02

Doesn't matter if it is unfired. It is used.
Used gun selling for very near to new retail usually ain't gonna happen with anyone who knows what is going on.
Your gun tho. You can sit on it until a pigeon comes along or drop the price to move it.

I like the way we do things at TGT, better. That dialog should have been done in private by PM. Don't dump on a guy's ad even if you know that it's overpriced. If you don't like the offer, then move on or PM an offer. If he says "NO" there's no harm done.

It's not right to poison the guy's well. If he's asking too much and gets zero replies, he'll get the message.

A. I wouldn't sell a gun to some dude named Ham Bone.

B. I wouldn't sell a gun to someone whose first interaction with me was a one word sentence.