Can you help me
G

Between those 2 I'd go woth the M$P if you can find it for that price. Also go on line and take a look if S&W are still running the rebates. They used to give you back $100 and a couple of mags. Not sure what if anything is being offered anymore though. I have owned 2 Bushmasters and had no serious issues with either, but I have seen and heard a lot of Busshy QC issues like canted sights, non staked gas keys... I have not run into them opersonally, but I have seen friends with Bushys that have run out of windage while zero'ing. About the only negative that UI have heard of the M&P is that some of the eralier ones did not accept Magpul PMags Not sure if that issue has been resolved yet or not.
P

I have little experience with Bushmasters but I would highly recommend the S&W, I've had mine for a while and it runs great.
M

I would get the M&P at that price.The only other ARs that in that price range would be DPMS and Century arms.I have a DPMS and it has run flawlessly.I owned a Bushmaster M4 but had issues with it jamming constantly.Heres a pic of my Dpms with some of my other favorites. 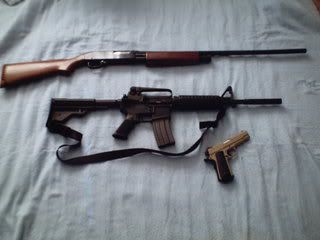 Suggest you take a look at Stag Arms, a few dollars more....but worth it. Good build quality, tight upper to lower fit. Plus they have the M4 feed ramps.
C

The simplest way I can answer this is by using the patented: ChicagoTex "The-Way-I-Feel-About-It-O-Meter" grading system:

All my "As" will run you a bare minimum of $1100 or so for a complete rifle (and some quite a bit more, quality ain't cheap). For the price sensitive, there's no shame in stepping down to a "B-class" as these rifles serve countless folks very well (including many a police department and federal agency). For my money, I feel S&W probably makes the finest B-class rifle out there, there's something about them that is very tight and precise, especially when compared with something like a Bushmaster (which is, by all means, a good rifle, it's just somehow not quite as nice). If you're particularly price sensitive you can step into the C realm and get a rifle that works well and is decently accurate, but is difficult to have a large amount of pride-in-ownership for.
With all due respect to the many satisfied DPMS owners out there - their sloppy feed ramps and out-of-spec chambers don't pass the litmus test of what I can recommend with a clear conscience. Maybe my standards are unreasonably high - maybe DPMS owners' standards are unreasonably low.
Olympic's just garbage - do I even really have to explain why they're in the "F class"?

I am very far from an expert, buy everyon has opionion so here is mine. Personally, I'd opt for the Bushmaster, but it's a toss up. The Bushy does have what looks to be a YHM front sight which is an $80 value, and gives you a front sling ring and makes adding a free float tube or quad rail pretty easy. On the other hand the SW has a weaver gas block which is versital and also makes it easy to add a tube. I don't particularly like the permenantly installed flash deflector on the Bushy. You're stuck with that unless you want to change barrells. Were as it appears the SW has a cheap-o A2 flash deflector (nothing wrong with that, I have that on my AR, and it's okay for now) Either one is a good value at the listed prices.

Like the OP i've been bitten by the AR bug myself and would like to add a question for you guy's in his thread. I plan to use this gun PRIMARILY as a HD weapon but will take it out to the range on occasion and shoot the 100 yd range. Sooooooooooooo....