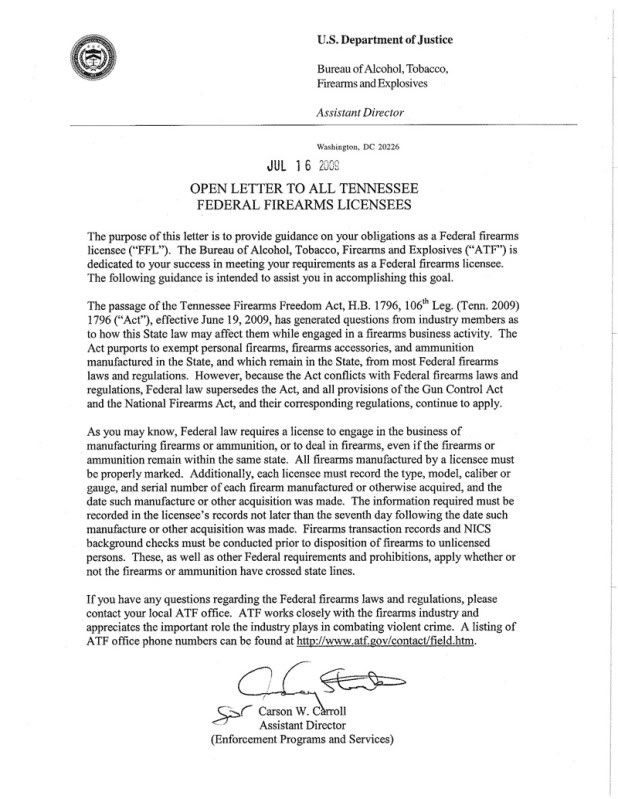 Last month, Tennessee passed their Firearms Freedom Act which exempted all firearms, accessories and ammunition manufactured within Tennessee and sold/kept within the state, from Federal Regulations. This is due to the stretched and, honestly, invented jurisdiction that the Federal Government claims over firearms through the interstate commerce clause (You know, it being an EXPRESS AREA THEY ARE NOT AUTHORIZED TO CONTROL). Since these are not involved in any manner of interstate commerce, the Constitution doesn't give even the most stretched and invented jurisdiction to the Feds. However, above you see BATFE's response to a STATE declaring their RIGHTS under the 9th and 10th Amendments. Basically, it's WE DON'T GIVE A DAMN.

This is our Government and it matters not who's running it or what "Party" is in control. Democrats passed the National Firearms Act, Democrat signed the Gun Control Act, a Republican banned the importation of "Assault Weapons", and REAGAN - the GOD OF REPUBLICANS - signed the damn Firearm Owners Protection Act that, with the Hughes Amendment, CUT OFF the supply of newly registered NFA weapons. That's why a $100 Sten Gun will now cost you around $5,000 at a minimum. Good luck buying a Thompson, that's about $30,000 nowadays.

Anyway, here is the Title Line of the Gun Control Act of 1968 that this letter demands be respected:

An Act to amend title 18, United States Code, to provide for better control of the interstate traffic in firearms.

Be it enacted by the Senate and House of Representatives of the United States of America in Congress assembled, that this Act may be cited as the "Gun Control Act of 1968".

See that, right there in the title line. INTERSTATE TRAFFIC. Now, a State acknowledging this and claiming its rights are being told to piss off by the BATFE.

CONTROL. That's all the Federal Government cares about. Not parties, not constituents, not right vs. left. Simply control. Oh, to hell with it. Let's just give 'em health care, industry, personal security, the economy and anything else they express an interest in while we're at it. That should work out fine, I'm sure.
T

I pretty much told everyone that this would happen if they did it in Texas. Federal law is federal law, no matter what a state passes.
T

I agree-- I did like Reagan, but his overall stance on guns and ownership was not that great.
But to be fair, it did not start with him, or end with him-- once gunowners gave up a little, they opened the doors to give it all away-- and unless we stand up and fight (not armed insurrection) we risk losing the right to even own a popgun---

Which is exactly what the government wants-- and you are right, it crosses al lparties and left/right sides...

Figures, the political machine just does not understand the definition of the word "infringed"
F

Most Federal (and some allegedly Federal) agencies think their jurisdiction extends into the States, when in fact many only have jurisdiction over Federal territory or Federal installations. However, having the FFL might contractually subject you to their jurisdiction, I don't know, I'm not a lawyer.
C

Should come as no surprise.
You're right about control. Control is power, and they'll be attaching gun control,taxes,registration,sales,exchanges etc etc. to most finacial aid packages before long. Take the "whole" package or else.
They'll do anything to exercise rule.

They're pushing more all the time. With upcoming congressional elections you can expect it to get worse.
When will we get enough of this crap?
Z

And that's exactly the point to this legislation - a person wouldn't have to get an FFL to sell guns that were manufactured and sold in the state.
M