Hello. I have never been what one might call an "L-frame" fan. I had plenty of "use" for the compact "J's" as well as the very comfortable "K's" and I seem to have always really, really respected the big N-frame revolvers from Smith & Wesson.

The L-frames, with their "Pythonesque"-looking full-length barrel underlugs just didn't "do it" for me. At the police agency where I worked, I was in a definite minority. Shortly after the S&W L-frame line hit dealers' shelves in my neck of the woods, they sold and I mean sold WELL! As one of my agency's firearm instructors, I qualified quite a few officers with their new service revolvers. (Shortly after this time, it seems that the police exodus to "high-capacity automatics" began.)

Without question, the Model 686 was the most popular L-frame .357 among the officers I saw, though some went with the more traditional blue-steel 586 version. Those were the only two models I recall seeing/qualifying.

I have to admit that after shooting a few of the Model 686's, I was convinced that these things would shoot, ie: group very well indeed! I also appreciated their being beefed up to handle an expanded diet of full-power magnums and liked the extra weight's aiding a reduction in felt recoil when shooting full-power magnum loads. My not being a big fan of the L's back then was admittedly purely subjective; the revolvers did precisely what S&W intended them to. (I seem to remember a recall in which the company applied a minor corrective action to prevent primer flow from locking up these revolvers with certain "hot" loads. In my view, this did not constitute any design weakness or "fatal flaw" in the design and it was corrected quickly. In any event, this one has had the "upgrade" and has the "M" stamped in the frame beneath the cylinder yoke.)

So there I am, minding my own business, shooting my 1911's, Hi Powers and anything-but-an-L-frame S&W revolvers when I spy a very attractive morsel in my dealer's case!

It was the S&W Model 681, a fixed sight service revolver in the tradition of the Model's 10 and 58 except that it had the full-length barrel underlug, but it didn't look so "bad" now. Something about this "Plain Jane" revolver was appealing and I didn't even care for stainless steel, although I admitted it was very practical for police service. (I still prefer blue, but do have quite a few stainless revolvers now. Some of my friends say I'm not the quickest to accept "change".)

The thing shot very well indeed and it was a "house gun" and remained loaded with Winchester 145-gr. STHP's for several years...and then one day...I so foolishly let it slip away. I traded it and then S&W quit offering either the 581 or 681!

In more recent times, I have come to realize that I made more than a few "mistakes" years ago and letting that 681 get away was certainly one. (We won't speak of the Model 58's, 10's, 27's and 29's that "escaped"!)
I never found one to replace the one I sold but recently did luck into a very clean, slightly-used S&W Model 581. (Let this be a lesson for us all. (As an old friend of mine tried to tell me, "When you get a good gun, keep it." I do wish I'd heeded his advice.) 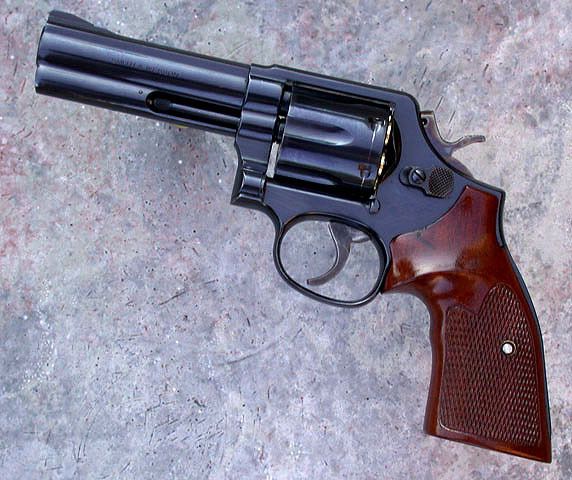 This 581 shows a tiny bit of holster wear but has been shot even less. I hope to "correct" that! The stocks shown are some old and long-discontinued Fitz "Gunfighters".

Shooting: The revolver was used in a short session consisting of a series of "Failure to Stop" Drills done at 10 yards to see how the thing handles at speed for me and some more precise groupings at 15 yards. (Time prevented my fooling around with more loads and at farther ranges.)

At 15 yards, groups were fired in single-action, slow-fire and using both hands with wrists braced and while in a seated position. The goal was to try and wring out as much of the revolver's inherent mechanical accuracy as possible. I am sure that the groups would have been smaller minus the human error, ie: the error provided by me.

Average velocities provided are based on 10-shot strings fired 10' from the chronograph screens. 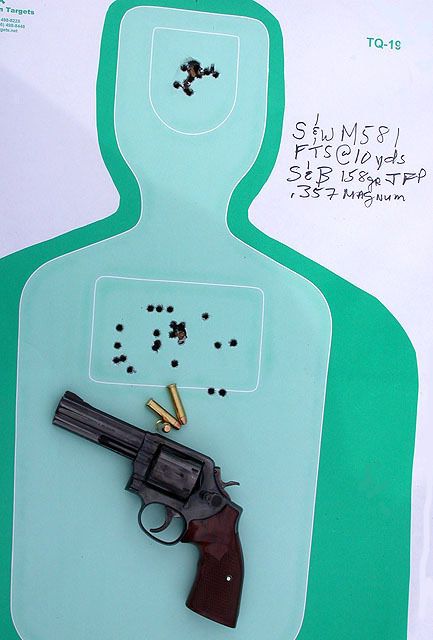 The "Failure to Stop Drill", sometimes called "The Mozambique Drill" has fallen from favor with quite a few instructors in more recent times. The drill consists of putting two shots to the torso as quickly as is accurately possible, accessing the situation and firing one to the head. The idea against this exercise is that it "programs" us into firing a certain number of shots rather than firing the appropriate number based on the particular situation. I am not suggesting this as a training technique but I do think it gives at least an idea of how one performs with a specific weapon when moving from somewhat "coarse" accuracy to more precise in compressed time-frames. Anyway, I chose to do it. Average time for these was 2.19 secs. This is starting with a two-hand hold in a "low ready" position. Ammunition was Sellier &Bellot .357 Magnum 158-gr. JFP at an average velocity of 1199 ft/sec from this revolver. (Mr. Miculek has nothing to fear from me!)

After chronographing the S&B and Winchester magnum ammunition, I decided that the Fitz Gunfighter stocks are not for me. They're quite narrow at the top backstrap area. Though the feel comfortable to me, felt-recoil is unpleasant between my thumb and trigger-finger due to the narrowness of these stocks. I have now replaced them with the wider S&W service stocks, which are still quite compact. The areas of "comfort" as well as stock selection is subjective and what is uncomfortable to me might not be for the next guy. 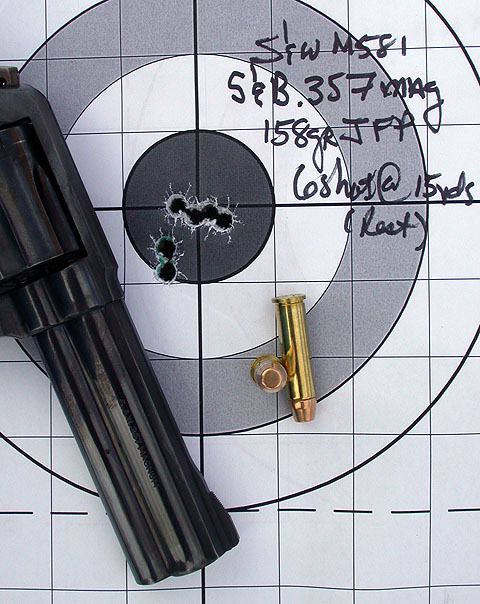 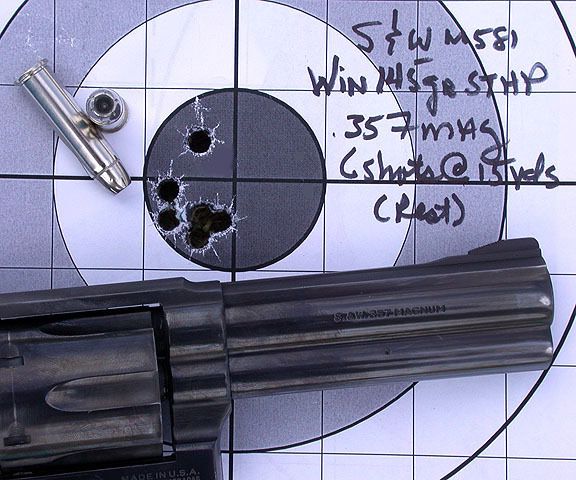 To me, the Winchester 145-gr. STHP had sharper felt-recoil than the one heavier S&B. The STHP load's average speed was 1221 ft/sec. 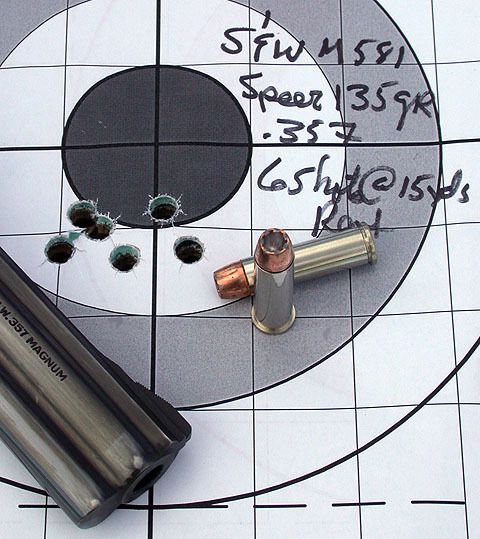 At 15 yards, POI is right at 1" low for POA. Felt-recoil on this lighter-loaded .357 load was very manageable in this all-steel, 6-shot L-frame. Average velocity was 1004 ft/sec.

Conclusion: Well, I like the thing and hopefully I've got enough sense to hang on to this one. No surprises and as others have noted, this service-style revolver's durable fixed sights are pretty much regulated for full-power 158-gr. loads, though the slightly lighter 145's hit very, very close to POA at 15 yards.

Firing pin strikes were well-centered and extraction was at no time "sticky". This one has a very, very nice double-action trigger pull with the usual light-and-crisp single-action.

In short, this revolver never malfunctioned at all.

Based on the popularity of Ruger's GP100 fixed sight revolvers in both 3 and 4" barrel lengths, I think S&W's 581/681's built in the more "traditional" manner would be extremely well-received.

I would buy another...and hope that they'd offer the same design in a 5-shot .44 Special! 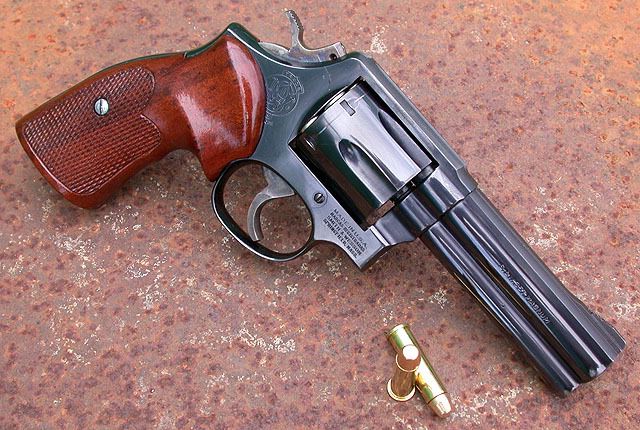 As far as I could tell way back when I had my original 681 and after testing this 581 today, this fixed-sight service revolver is a capable performer. I like its simplicity.

I have not seem many of these at all...but I'm always looking. You might want to do the same if this style wheelgun suits you.

My first duty weapon was a 681 bought used from Carters Country in 1978. Huge frame and tiny grips. Pachmayr solved the grip problem.
I too am sorry I ever let it go. Carried it for a decade and sold it to fund a S&W 4506. At least I still have that one. For me its the best .45 in the world.
R

I was teaching a basic revolver course for our agency and had one guy with a 681 that was printing shotgun patterns at 15 yards. I asked him what the problem was and he responded that the gun would not shoot any better. I took it from him loaded one round and shot a D/A X. I unloaded the case and handed it back to him with an offer to buy it. He declined (w/mouth agape and eyes like pie plates). I told him to do what he had been trained to do, focus on the front sight and squeeze. Instantly he sarted shooting everything in the 9 ring, a vast improvement.

Are you the same Steven Camp affiliated with the American Gunsmith Association?
S

Hello. No, sir. I am not a gunsmith. There is another "Stephen Camp" mixed up with shooting and such and I suspect that's the fellow about whom you asked. 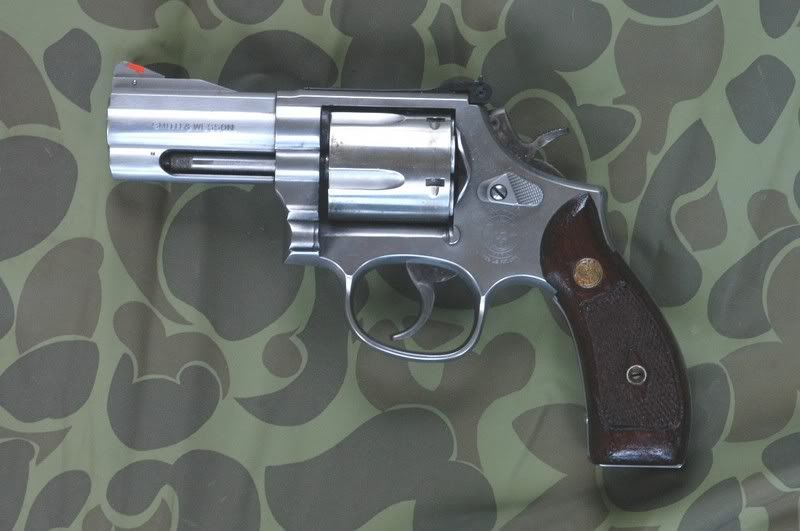 Naperville ILLINOIS for now be back in the promise

S&W revolvers. Few things are more beautiful and simple. My father carried a 686 when he was on the force for 13+ years. While he was training he noticed it was shooting a lil to one side and the instructor put it in a vice and whacked the hell out of it with a mallet a few times and now nearly 20 years later I can pop cans at off a fence at a long way off. I'm pretty sure me and my lil bro will have good scrap over who gets it in the future. One hell of a weapon.
You must log in or register to reply here.
Share:
Facebook Twitter Reddit Pinterest Tumblr WhatsApp Email Share Link