Hello. I recently bought a small quantity of Hornady's new "Critical Defense" line of ammuntion in both .380 ACP and .38 Special. Neither is +P-rated. 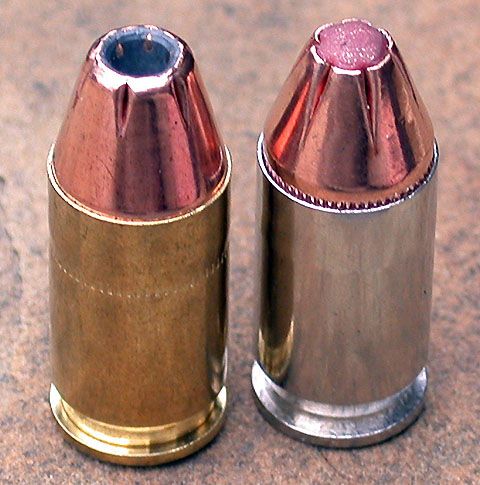 Hornady's XTP line of ammunition uses a bullet that usually expands to about 1.5 times its original diameter (left). The new Critical Defense ammunition uses Hornady's FTX bullet (right). It is a jacketed lead bullet but one that has its hollow cavity filled with a very maleable plastic material that prevents its being clogged and almost guarantees expansion. Based on my admittedly limited and statistically-invalid layman's "tests", I believe it to be so.

I chronographed each load and found an average velocity of 911 ft/sec when the .380 ACP 90-gr. Critical Defense load was fired from a 3.5" bbl Bersa Thunder.

This does not meet the published velocity of 1000 ft/sec from the company.

The .38 Special load was fired from a well-used S&W Model 042 with the usual 1 7/8" bbl. Its average velocity measured 856 ft/sec, far short of the nominal listed velocity of 1175 ft/sec. These figures are based on 10 shots fired 10 feet from the chronograph screens. 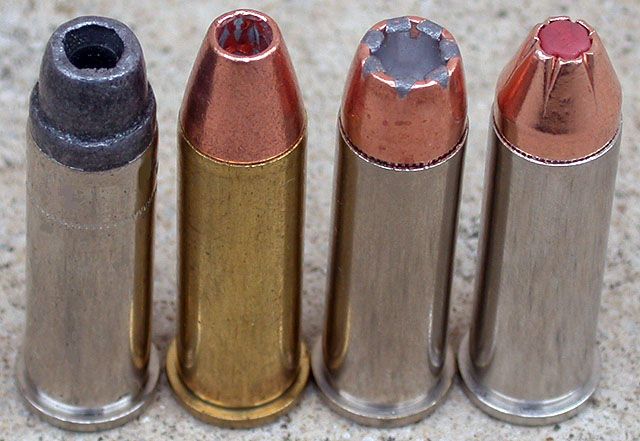 It becomes pretty obvious that either longer barrels or pressure barrels were used when Hornady got their data.

In super-saturated newsprint, average penetration (also based on ten shots with 5 of each caliber fired through 4 layers of an old cotton/polyester towel) was 6.75" for the .380, which probably translates to just over 10" penetration in calibrated 10% ballistic gelatin. This is as good as I've seen for an expanding bullet in this caliber. Most do about 7.5 to 8" in gelatin, it seems.

The .38's were fired following the same protocol and achieved an average velocity of 856 ft/sec with penetration in the soaked newsprint averaging 7.6" or probably about 11.4" in ballistic gelatin.

I was amazed at the extreme consistency not only the expansion's reliability but the small differences in speed, shot to shot for each caliber. I could not differentiate between the expanded bullets fired through the towel and those that were not.

In my admittedly limited experience with this new ammunition, it appears to work and work very well.
For those interested in a more detailed report, it can be found here:

Excellent! I read up on these in American Rifleman a month or two ago. They seem like just the ticket for penetrating heavy clothing. Can't wait till they come out with .45 ACP.
O

It looks like it will be a big improvement over the XTP.

I thought the XTP had a good reputation, but I saw an FBI report the other day that implied it expanded in ballistic gelatin fine, but not if the gelatin was covered in denim, sounded like no expansion then, but it did not give a lot of information on that.