I have to say first off that I'm a huge fan of the original sights found on military-style 1911 models. They are small and precise.

This was not the ideal situation.

Because I am, in the next couple years, going to be sidelining the Mosin sight business and start full-fledge gunsmithing, I've been buying tools from Brownell's when finances allow.

The past month was a staking tool and slide fixture. Just makes sense to have both, and the slide holding fixture fits nicely in a vice.

I chose a 10-8 National Match rear sight and an MGW serrated front sight. 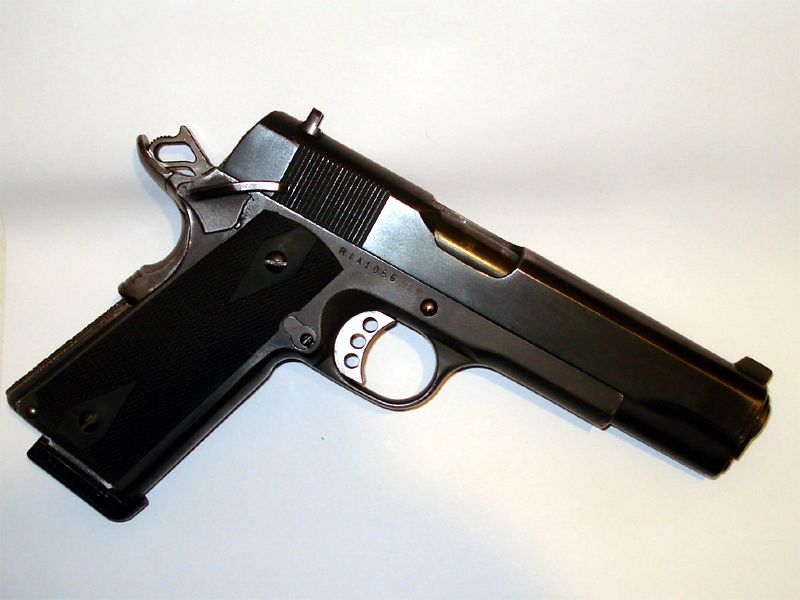 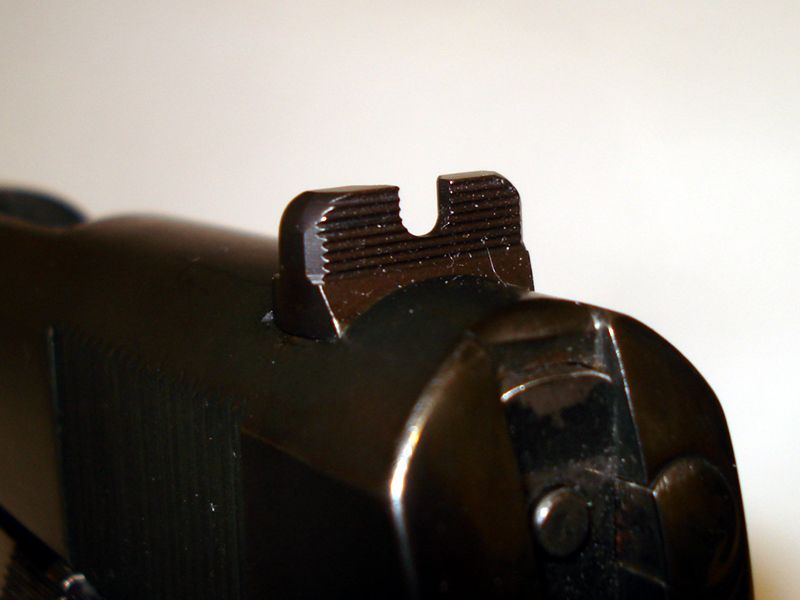 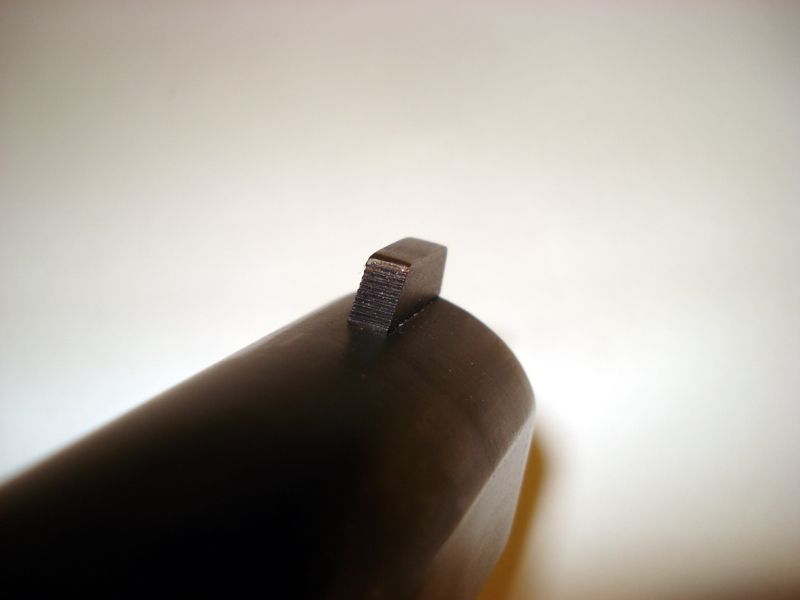 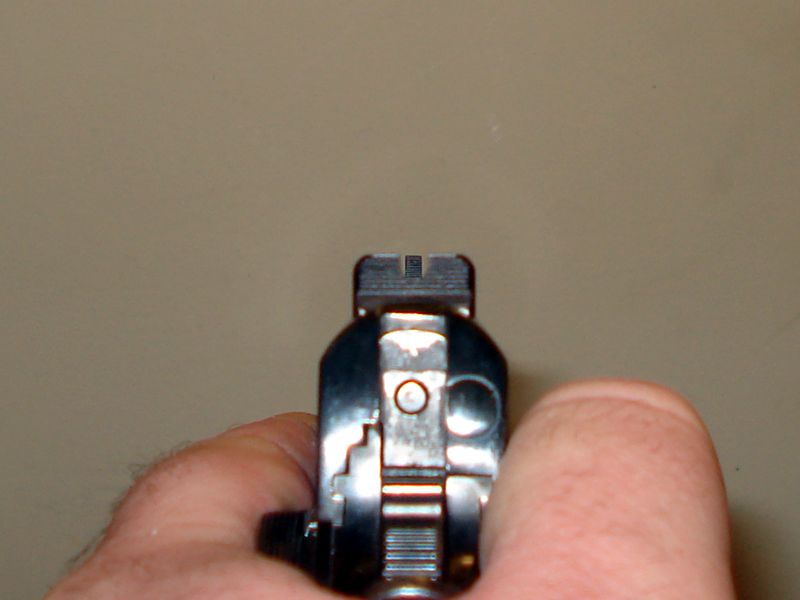 Test firing, however, revealed a nice surprise: I was never able to really test the NM bushing. At 15 long paces I was chewing out one ragged hole, albeit low. At 30 paces, most still touched. This was unrested shooting with ammo I consider my junk reloads that I keep around in an old ammo can specifically for function testing.

When I go finish sighting in this weekend, I'll be taking good handloads and a few carry loads I need to shoot.

I am pleased. While I might go to a night sight eventually, I'm not a fan of staking repeatedly. I figure one day the hole will waller out.

After I finish sighting in, the slide will get some more bluing and the sights will be blended better with the slide.

A note for the Rock Island users out there: Rock Island is supposed to use a G.I. dovetail rear sight on the rear. It's close, but plan on having to fit the sight with a file. This is a good thing for those of us who like our sights in tight in addition to any set-screw which may be present.

The front sight uses a narrow tenon, and that is in spec.

I look forward to finishing this up. This pistol has been with me since before I knew what I was doing, during the active learning period in which I subjected it to things a 1911 should never be subjected to, and it's survived to now with nary a complaint. It deserves some blending and fixing up! The one last thing it will eventually receive is a wide paddle Wilson Bulletproof Ambi Safety to replace the Caspian on it now.

All the internals are already military, Wilson, or Brown. No MIM.

Looks good Josh! I like that sight combo quite a bit, especially with a gold bead or fiber optic front sight. Still retains the classic GI style appearance, while offering improved performance.

I can't choose between the Harrison retro or the 10-8 like yours.

i do like that and that would help my old eyes

I sighted in today. At 11 strides (about 10 yards for me) I got about 1.5" shooting unsupported with junk handloads.

While I was sighting it in, I ended up reprofiling the front sight. This should take care of the narrow tenon concerns some have: 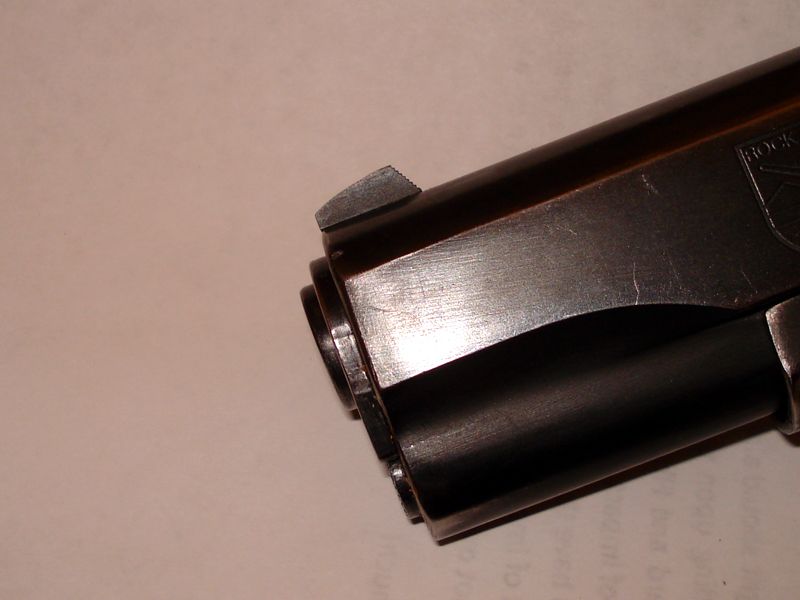 Not real sure I like the profile, but the sights work very well.

Well Folks, I finished gettin' her sighted in today, with my good ammo. (The load is listed on the target, but be warned it's over what Lyman lists in their Cast Bullet Handbook.) 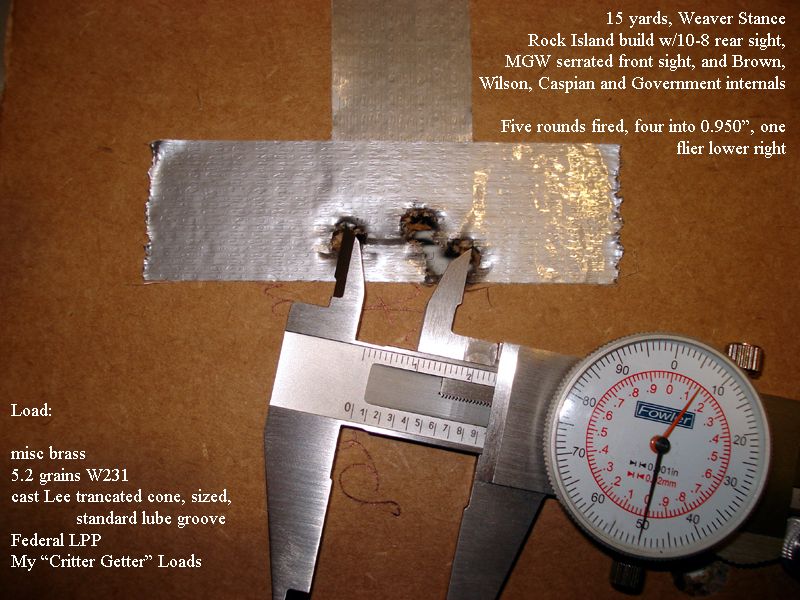 That was at 15 yards. I don't know what happened with that flier; chances are I just pushed the trigger.

Interestingly, I had to take the sight down further: 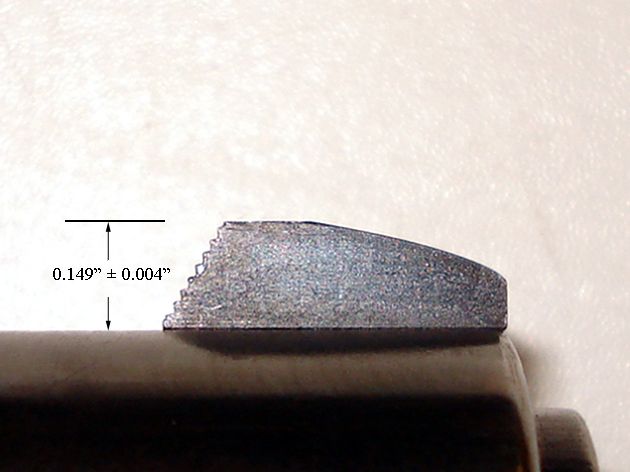 The only thing I can figure is that Armscor mills their rear sight dovetails a bit deeper than the standard Series 70.

But, I'm happy. The new sights are letting me shoot this pistol closer to its mechanical accuracy.

Josh
You must log in or register to reply here.