NOONAN: Even Texas Turns On Bush...

America is in line at the airport. America has its shoes off, is carrying a rubberized bin, is going through a magnetometer. America is worried there is fungus on the floor after a million stockinged feet have walked on it. But America knows not to ask. America is guilty until proved innocent, and no one wants to draw undue attention. America left its ticket and passport in the jacket in the bin in the X-ray machine, and is admonished. America is embarrassed to have put one one-ounce moisturizer too many in the see-through bag. America is irritated that the TSA agent removed its mascara, opened it, put it to her nose, and smelled it. Why don't you put it up your nose and see if it explodes? America thinks.
And, as always: Why do we do this when you know I am not a terrorist, and you know I know you know I am not a terrorist? Why this costly and harassing kabuki when we both know the facts, and would agree that all this harassment is the government's way of showing "fairness," of showing that it will equally humiliate anyone in order to show its high-mindedness and sense of justice? Our politicians congratulate themselves on this as we stand in line. 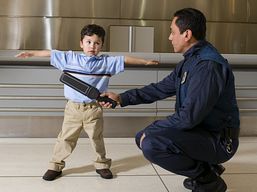 Corbis All the frisking, beeping and patting down is demoralizing to our society. It breeds resentment, encourages a sense that the normal are not in control, that common sense is yesterday. Another thing: It reduces the status of that ancestral arbiter and leader of society, the middle-aged woman. In the new fairness, she is treated like everyone, without respect, like the loud ruffian and the vulgar girl on the phone. The middle-aged woman is the one spread-eagled over there in the delicate shell beneath the removed jacket, praying nothing on her body goes beep and makes people look.
America makes it through security, gets to the gate, waits. The TV monitor is on. It is Wolf Blitzer. He is telling us with a voice of urgency of the Pennsylvania returns. But no one looks up. We are a nation of Willie Lomans, dragging our rollies through acres of airport, going through life with a suitcase and a slack jaw, trying to get home after a long day of meetings, of moving product.
No one in crowded gate 14 looks up to see what happened in Pennsylvania. No one. Wolf talks to the air. Gate 14 is small-town America, a mix, a group of people of all classes and races brought together and living in close proximity until the plane is called, and America knows what Samuel Johnson knew. "How small of all that human hearts endure / That part which laws or kings can cause or cure."
Gate 14 doesn't think any one of the candidates is going to make their lives better. Gate 14 will vote anyway, because they know they are the grownups of America and must play the role and do the job.

* * *​
So: Pennsylvania. As seen from the distance of West Texas, central California and Oklahoma, which is where I've been.
Main thought. Hillary Clinton is not Barack Obama's problem. America is Mr. Obama's problem. He has been tagged as a snooty lefty, as the glamorous, ambivalent candidate from Men's Vogue, the candidate who loves America because of the great progress it has made in terms of racial fairness. Fine, good. But has he ever gotten misty-eyed over . . . the Wright Brothers and what kind of country allowed them to go off on their own and change everything? How about D-Day, or George Washington, or Henry Ford, or the losers and brigands who flocked to Sutter's Mill, who pushed their way west because there was gold in them thar hills? There's gold in that history.
John McCain carries it in his bones. Mr. McCain learned it in school, in the Naval Academy, and, literally, at grandpa's knee. Mrs. Clinton learned at least its importance in her long slog through Arkansas, circa 1977-92.
Mr. Obama? What does he think about all that history? Which is another way of saying: What does he think of America? That's why people talk about the flag pin absent from the lapel. They wonder if it means something. Not that the presence of the pin proves love of country – any cynic can wear a pin, and many cynics do. But what about Obama and America? Who would have taught him to love it, and what did he learn was loveable, and what does he think about it all?
Another challenge. Snooty lefties get angry when you ask them to talk about these things. They get resentful. Who are you to question my patriotism? But no one is questioning his patriotism, they're questioning its content, its fullness. Gate 14 has a right to hear this. They'd lean forward to hear.
This is an opportunity, for Mr. Obama needs an Act II. Act II is hard. Act II is where the promise of Act I is deepened, the plot thickens, and all is teed up for resolution and meaning. Mr. Obama's Act I was: I'm Obama. He enters the scene. Act III will be the convention and acceptance speech. After that a whole new drama begins. But for now he needs Act II. He should make his subject America.

* * *​
Here's some comfort for him, for all Democrats. In Lubbock, Texas – Lubbock Comma Texas, the heart of Texas conservatism – they dislike President Bush. He has lost them. I was there and saw it. Confusion has been followed by frustration has turned into resentment, and this is huge. Everyone knows the president's poll numbers are at historic lows, but if he is over in Lubbock, there is no place in this country that likes him. I made a speech and moved around and I was tough on him and no one – not one – defended or disagreed. I did the same in North Carolina recently, and again no defenders. I did the same in Fresno, Calif., and no defenders, not one.
He has left on-the-ground conservatives – the local right-winger, the town intellectual reading Burke and Kirk, the old Reagan committeewoman – feeling undefended, unrepresented and alone.
This will have impact down the road.
I finally understand the party nostalgia for Reagan. Everyone speaks of him now, but it wasn't that way in 2000, or 1992, or 1996, or even '04.
I think it is a manifestation of dislike for and disappointment in Mr. Bush. It is a turning away that is a turning back. It is a looking back to conservatism when conservatism was clear, knew what it was, was grounded in the facts of the world.
The reasons for the quiet break with Mr. Bush: spending, they say first, growth in the power and size of government, Iraq. I imagine some of this: a fine and bitter conservative sense that he has never had to stand in his stockinged feet at the airport holding the bin, being harassed. He has never had to live in the world he helped make, the one where grandma's hip replacement is setting off the beeper here and the child is crying there. And of course as a former president, with the entourage and the private jets, he never will. I bet conservatives don't like it. I'm certain Gate 14 doesn't.
You must log in or register to reply here.
Share:
Facebook Twitter Reddit Pinterest Tumblr WhatsApp Email Share Link