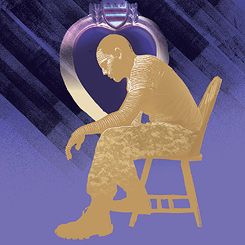 Matthew Leake But with an increasing number of troops being diagnosed with post-traumatic stress disorder, the modern military is debating an idea Gen. Washington never considered -- awarding one of the nation's top military citations to veterans with psychological wounds, not just physical ones.
Defense Secretary Robert Gates offered cautious support for such a change on a trip to a military base in Texas this month.
"It's an interesting idea," Mr. Gates said in response to a question. "I think it is clearly something that needs to be looked at."
The Pentagon says it isn't formally considering a change in policy at this point, but Mr. Gates's comments sparked a heated debate on military blogs, message boards and email lists. The dispute reflects a broader question roiling the military: Can psychological traumas, no matter how debilitating, be considered equivalent to dismembering physical wounds?
Supporters of awarding the Purple Heart to veterans with PTSD believe the move would reduce the stigma that surrounds the disorder and spur more soldiers and Marines to seek help without fear of limiting their careers.
The High Price Paid
"These guys have paid at least as high a price, some of them, as anybody with a traumatic brain injury, as anybody with a shrapnel wound," John Fortunato, who runs a military PTSD treatment facility in Texas, told reporters recently. Absent a policy change, Dr. Fortunato told reporters, troops will mistakenly believe that PTSD is a "wound that isn't worthy."
Opponents argue that the Purple Heart should be reserved for physical injuries, as has been the case since the medal was reinstituted by Congress in 1932. Military regulations say the award should go to troops with injuries "received in action with an enemy." Some opponents also note that PTSD can be faked, which can't easily be done with a physical wound.
"The Purple Heart was meant to be a badge of honor to show you were wounded in battle," says Bob Mackey, a retired Army lieutenant colonel who fought in the first and second Iraq wars. "I've been in combat three times. There's stuff I've had to deal with. But it's substantially different from being physically hurt."
The biggest difference, he says, is that some veterans may be diagnosed with PTSD even if they never saw combat or fought an enemy -- requirements, historically, for receiving a Purple Heart.
T

A medal isn't going to help these guys. The military needs to focus on positive solutions.

We screwed up with the Vietnam era, we have ZERO excuse with todays generation of fighting men.

This should be a national priority.
L

I agree. These guys/gals don't need a medal; they need SERIOUS help. As I understand it, the Purple Heart was originally designed to show that a solder had "shed blood" for his country so that would mean changing the definition of the medal. If a medal would solve their problems, then perhaps creating a new medal for that situation would be appropriate but I think their needs go far beyond a simple medal.
M

I was Army Infantry in Vietnam/Cambodia 1969/70, it's on-going counseling our men and women in uniform need. A medal can be taken off and put away, PTSD can't. I've never been able to understand why some of us can come home broken and other who faced the same situations come home and go right back to a normal life.
Z

midnightrider said:
I've never been able to understand why some of us can come home broken and other who faced the same situations come home and go right back to a normal life.
Click to expand...

Some people just can't cope with the horrors of war. Some accept it for what it is, and others dwell on it and it grows in their minds. You have to be able to just push it into the back of your head and just give up on it.

I've seen some stories about PTSD and others, and the ones that suffer the most often times cannot get past the war in their lives. One particular guy was stuck in a Vietnam mindset, he'd pushed away his family and his only consolation was meeting friends of his in his unit. I can't imagine how hard it is to push that out of your mind, but without help, it's not going to happen, and that is where the American people, the military, and our government have failed. These guys go from killing people, fear of dying, and a relatively lawless mindset back into a structured, sheltered society.

The only thing I can liken it to was my ongoing wound care. Every other day I'd have to have the dressings changed and it was incredibly painful. I was to the point that I was losing control of my body, and that any sensation in / near the wound, even so much as touching me, would cause me to flinch, and I even got to the point that I would grab at their hand. The anxiety would cause me to ramble on mindlessly. I'd have double the heart rate of normal resting humans. It definitely was something that I found hard to control. They eventually put me on Xanax as a means of reducing the anxiety. Comparative to war, this is nothing, but it gave me a glimpse into the reality of mental stress.
M

When I came home no one really talked about PTSD, the vets were just not considered in any good light. I had the dreams and the mood swings, but nothing really bad until I went hunting with my cousins and nearly shot one when he fired at some ducks off to my left. I put down my guns and didn't touch them again for nearly 30 years.
It's really a strange-feeling when your on an ambush one minute and 2 days later you're home in Irving Texas eating at a McDonald's.
Our soldiers today have it much worse to my way of thinking, most of us Vietnam Vets faced only 1 maybe 2 tours of Nam, while these warriors are seemingly on a conveyor belt rotation to the down range. My kid is currently looking at a 3rd rotation Iraq, Afghanistan, and Iraq again.
Our soldiers deserve the "best" care we can give them and each one that didn't return should be remembered for their ultimate sacrifice.
A medal won't even get you a cup of coffee when your war is over and for some of these kids they're war doesn't end with the trip home.
T

There really should be some half-way house for the soldiers coming home. A state-side base facility staffed with properly trained psychologists, therapists, experienced officers, and a designed regimen of demilitarization. The military trains soldiers for half a year before they drop them into combat, why is it they don't do the same when they return.

I would think it'd work wonders, or at least give people with problems a head start and an open door.

Another idea would be an adopt a vet program where Vietnam vets can adopt troubled Iraq / Afghanistan vets and work things out. Often the best advice is from someone that's been there before, and I know soldiers often will only talk to other soldiers about what happened and what is troubling them. It's an idea at least.
P

I just retired from the Guard this year. I was a Mental Health Specialist for over 20 years. Our national guard troops are at particular high risk for PTSD because of the extended multiple rotations, inconsistent training, home front issues, age.

The past three years the Texas Army National Guard has been conducting screenings and education for all soldiers returning from Iraq/Afghanistan. The numbers are 30-40% of returning soldiers exhibit overt signs of PTSD. This is in contrast to regular Army studies that suggest about 20%.

Another issue that's come up the past few years is MTBI (mild traumatic brain injury). The symptoms are almost identical to PTSD but the treatment process is completely different. This has lead to misdiagnoses and wrong treatment for a lot of our soldiers. Additional screening has been added to separate the two but I'm not familiar with the stats for MTBI.

If you have been in an IED event or other type of explosion and have not been tested for MTBI I strongly suggest you make an appointment with the VA and get tested.

There is and organization called the Vet Center that specializes in treatment for PTSD and other mental health issues associated with deployments. They are part of the VA but are a separate entity not to be confused with the VA medical clinics. They are very accommodating to soldiers needs unlike the usual redtape long wait VA BS most people are used to.

I don't think a medal will do anything to help any of these guys unless there is free parking or free coffee associated with it.

How jacked up is our society these days? We* would rather award lazy bastards by setting up a welfare system than help the men and women who keep this country free.