I found out about Shiloh Indoor Shooting Range (and this site) on Wednesday, June 17th. I went with a couple guys I've been working with this summer after lunch yesterday, and brought along a few of my handguns. I must say, this range and shop is one of the best I've been to. Not necessarily the architecture of the building, or the layout of the shooting bays, but the MINDSET of the people who work there, and the PHILOSOPHY of the owner/management. The products they had for sale were all TOP NOTCH kit, not just hunting rifles and cowboy action stuff (nothing wrong with that kind of shop, but it's not my bag.)

They had a Sig 556 Classic SWAT, a LWRC M6A2, H&K SL8 (NOT the SL8-1, but the SL8!!), Nighthawk pistols, Sigs, Glocks, and a plethora of other pistols. I was most impressed with their knife selection, as they had a few Zero Tolerance (ZT) knives in stock, including my absolute favorite, the ZT 300. Their holster selection was excellent, as well as their tactical flashlight selection.

I shot each of my different pistols at 21ft and cut out the targets for reference. I did not shoot the same number of rounds at each target, so the comparisons aren't exactly precise. 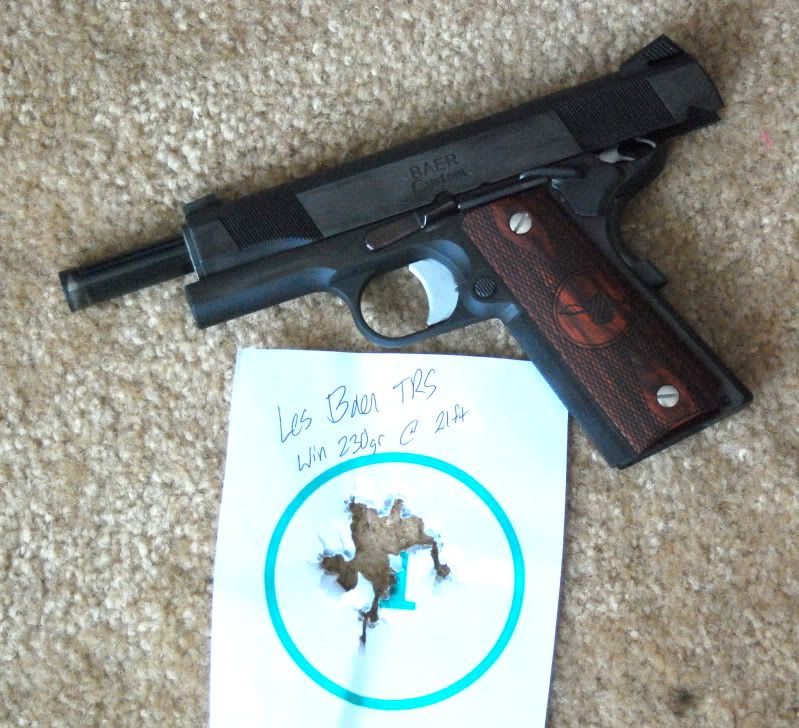 I shot magazine after magazine of ammo through that same ragged hole, before I got tired of shooting perfectly good ammo into thin air! 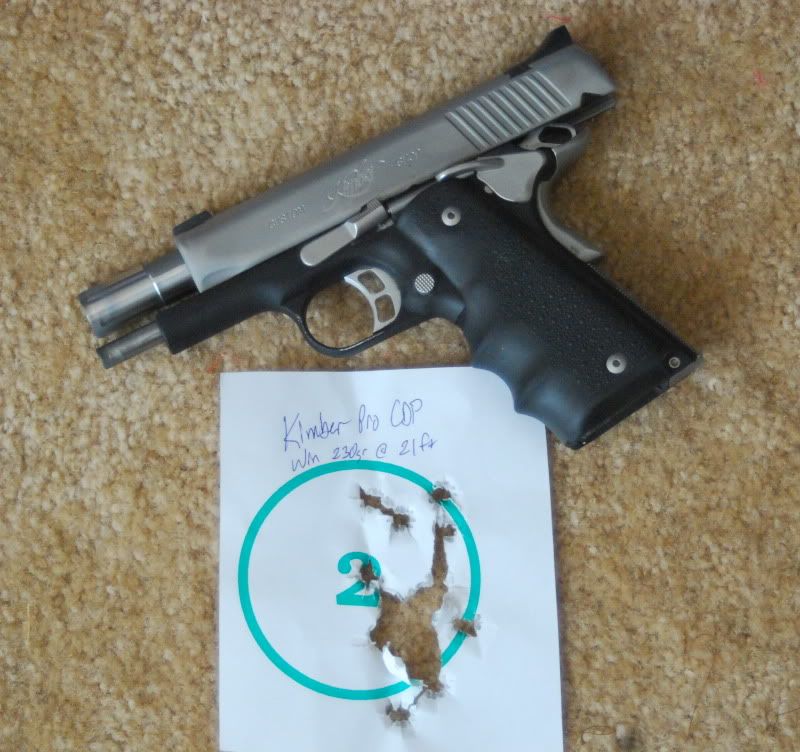 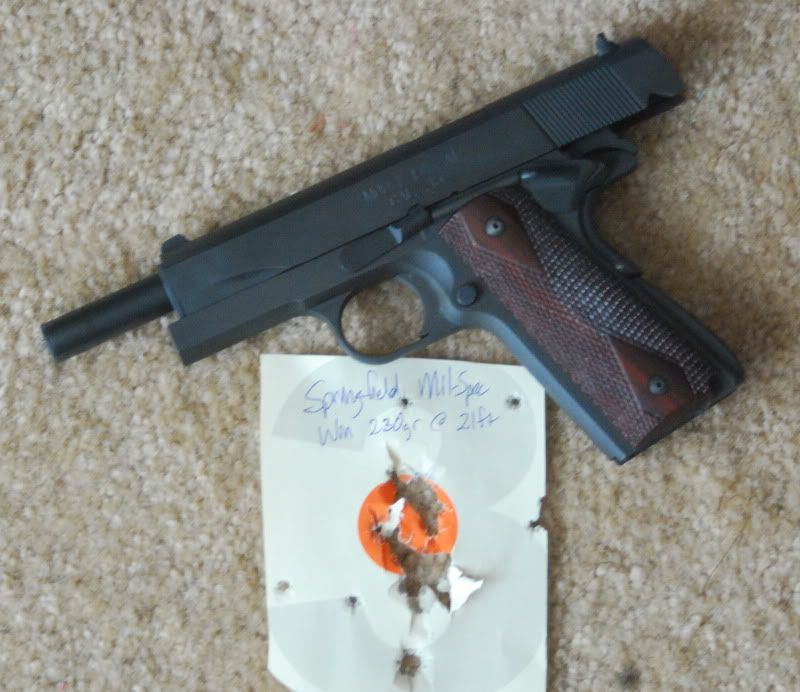 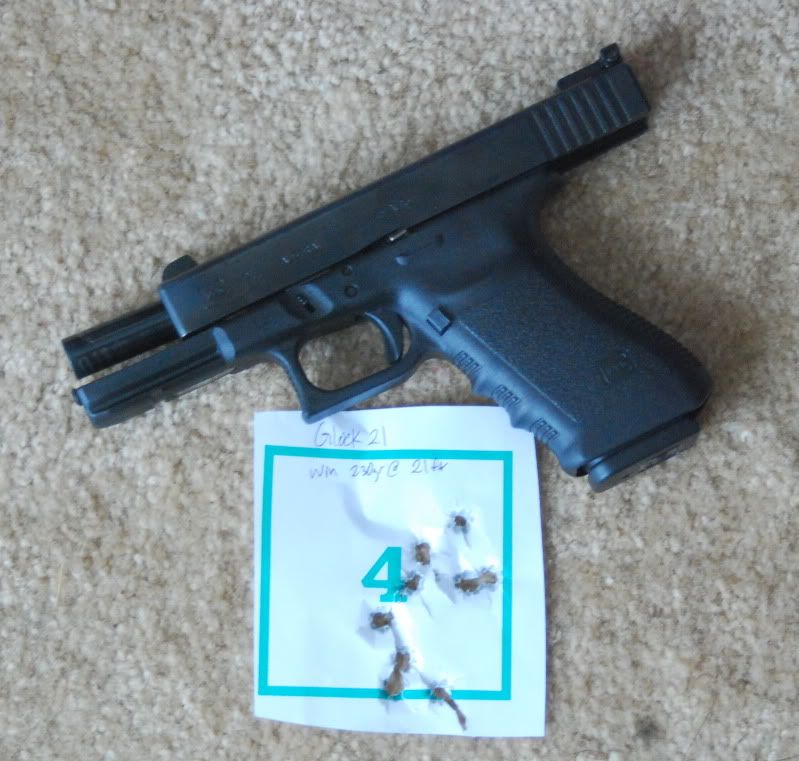 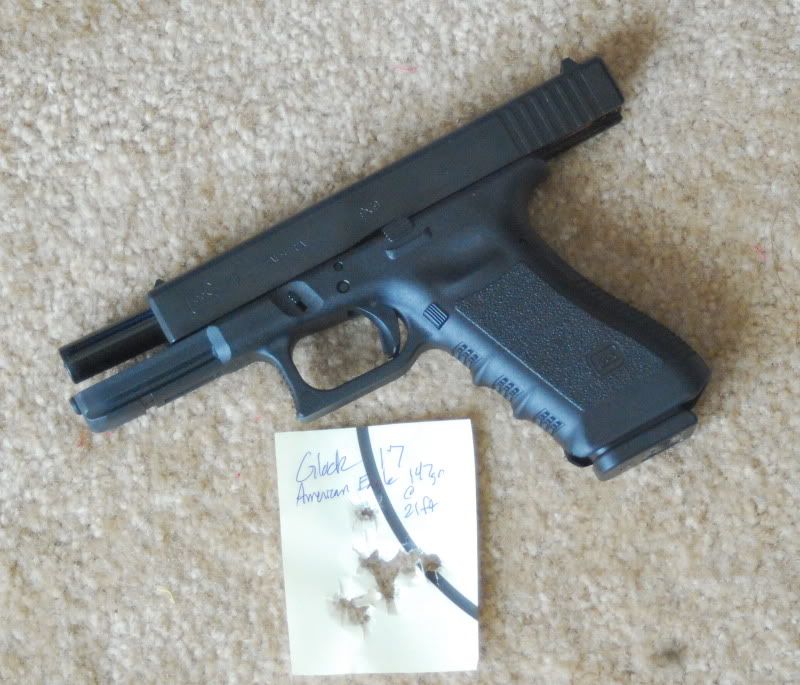 It was the first time shooting the Glock 17, and I was very impressed. The grouping is even better than it appears. The first round was fired to give me a point of aim. It is the lower left round by itself. The POI is actually slightly high and right, and I had one flyer I pulled high that broke out of the one-hole group. It was loaded with American Eagle 147gr FMJ, which proved VERY accurate!

I was a bit disappointed with the Glock 21. I expected better accuracy out of it. It was my duty weapon for six years at my last department and has served me VERY well for thousands and thousands of rounds.

All in all, 500 rounds of Winchester white box 230gr .45acp was fired, nearly 400 of it through the TRS without a single malfunction. By the end of the shooting session, it was so hot the slide was scorching my hands! I can't wait to get back out there, and start attending the IDPA shoots on Thursday nights, and the skills classes on Tuesdays.
B

Cool man glad you had fun. But where in the hell did you find 500 pistol round in any caliber?

Big country said:
Cool man glad you had fun. But where in the hell did you find 500 pistol round in any caliber?
Click to expand...

Anyone who shoots should before any presidential election that looks like it could go devilcratic knows that they need to spend all their spare cash on shooting supplies.

With Klintoon I bought $3K worth of ammo.
This election with the hafrican I bought over $5K in ammo.

Hopefully for the next election Obannana's will be out. Then again I'll most likely spend $7K on ammo just in case.
J

The Les Baer is new, and thus incredibly tight. I had to break it in, and that means LOTS of rounds through it. 400 isn't really even enough to TRULY break it in, but its a good start. The break-in isn't to get it fully reliable, but to loosen up its match bushing and barrel lockup, so that you can rack the slide by hand without SUBSTANTIAL effort.

If it wasn't for the need to break in that pistol, I wouldn't have shot NEARLY that much ammo. In fact, I brought two other guys with me just to help me shoot that many rounds! One of the guys suffered an injury (from shooting and loading!), and I had to finish off the rounds with a blistered trigger finger. The Les Baer was so hot by the time I finished, the slide was SCORCHING my hand! I should have brought my shooting gloves, but I usually just use those for rifle shooting.
J

Here's one of my targets, showing three rounds of 9mm from a Glock 17 at 7yds. 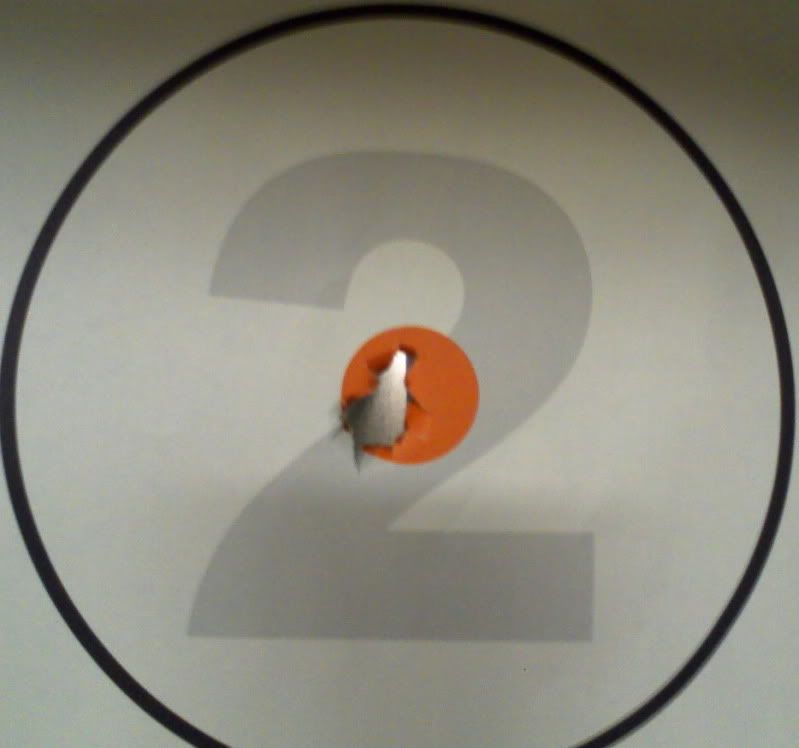 Damn nice shootin! Can you do that at 800 with a revolver?
M