I hope they eat the b@$tard alive. What makes it worse, besides the fact that Trooper Burns left behind a wife and baby is that the suspect was a LEO. 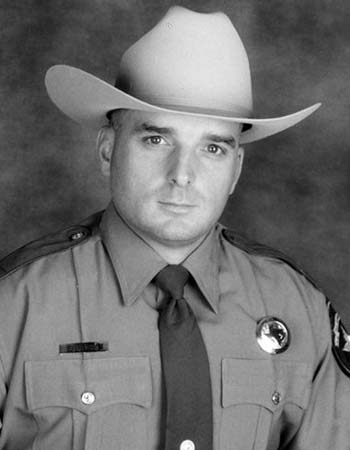 KELLYVILLE, Texas — A state trooper was fatally shot during a traffic stop in East Texas, and authorities on Wednesday were searching for a former police officer identified as a suspect.
Trooper James Scott Burns was killed Tuesday night after pulling over a car near Kellyville, about 135 miles east of Dallas, according to the Texas Department of Public Safety. A passer-by saw Burns after the shooting and used the trooper's radio to call for help.
Authorities issued a statewide search for Brandon Wayne Robertson, 37, of Tyler. He had not been formally charged as of Wednesday afternoon.
Robertson was a police officer for seven years at East Texas departments in Rusk County, Overton and Kilgore, according to the Texas Commission on Law Enforcement Standards and Education. He left law enforcement in 1999.
Burns, 39, is survived by his wife and their 5-month-old child.
D

Sad Days. I hope they catch the guy and fry his ass.
P

What a terrible person.
J

DopaVash said:
Sad Days. I hope they catch the guy and fry his ass.
Click to expand...

Some people don't need to make it as far as entering the system. Imagine the money that could be saved if the state didn't have to support and defend some of these bastards for 20 years while the system cycles them before finally carrying out a sentence. Even with the cost of ammo going up, I'm sure LE departments can afford 1 round and a call to the medical examiner to pick'm up.

I'm sad to hear that. That bastard will get what's coming to him soon enough I'm sure.

To all the LEO's everywhere, and especially on this forum, thank you for doing what you do. I'm sure you all deal with countless numbers of people who wouldn't give two thoughts about what you do, the danger you deal with daily, etc etc. I care, and am thankful for what you do!

Suspect is dead by self inflicted gunshot; a female companion is under arrest.

crossfire said:
Suspect is dead by self inflicted gunshot; a female companion is under arrest.
Click to expand...