Questions about self defense ammo

So,being fairly new to the knowledge on guns, I'd like my first question to be on hollow point bullets for a 9mm Beretta. On one end, I'm told these bullets are great for on person defense and that their impact can be deadly as their known for mushrooming out. On the other end, I'm told the 115 grain cartridges are deadlier. I could use some input. Which one is better for defense? Wouldn't they be about the same depending on range and aim?

Hollow point for self defense.
Hornady is my choice.

I don't really know the answer to this question.

I would simply advise that you don't obsess over it. Pick something and stick with it.

By 115gr, I guess you mean ball ammo? If the first round doesn't do it, just shoot again. And again. Or whatever it takes to shoot the assailant to the ground.

I've settled on the science of the Barnes full copper bullet.

Well, I think maybe there's been some confusion at some point. Maybe I can help clear things up. With pistols, there's mainly two different types of ammo you're going to find on the shelf right now. Full Metal Jacket (FMJ), and Hollow Points (HP). Then, in the HP world, there's different styles with filled tips, and such. We'll keep it simple for now and just focus on your basic HP. Both of those are referring to the actual bullet that is pressed into the casing (or shell).

So, along with the two bullet types-now you have your different weights of the bullet. That's where your grains come in. When people are referring to the grain, they're referring to the weight of the bullet. It is an extremely small unit of measurement-437.5 grains equals 1 ounce, I believe. The reason they use such a small unit of measure is ballistics measurements need to be extremely precise. So, this chart below is one I pulled from the Federal Premium website. It's a comparison for three of their hollow points. Of the three, they share two different grains.


As a "Just because", here's a picture I have that lets you see how the top hollow points offered right now do with their spread upon impact. 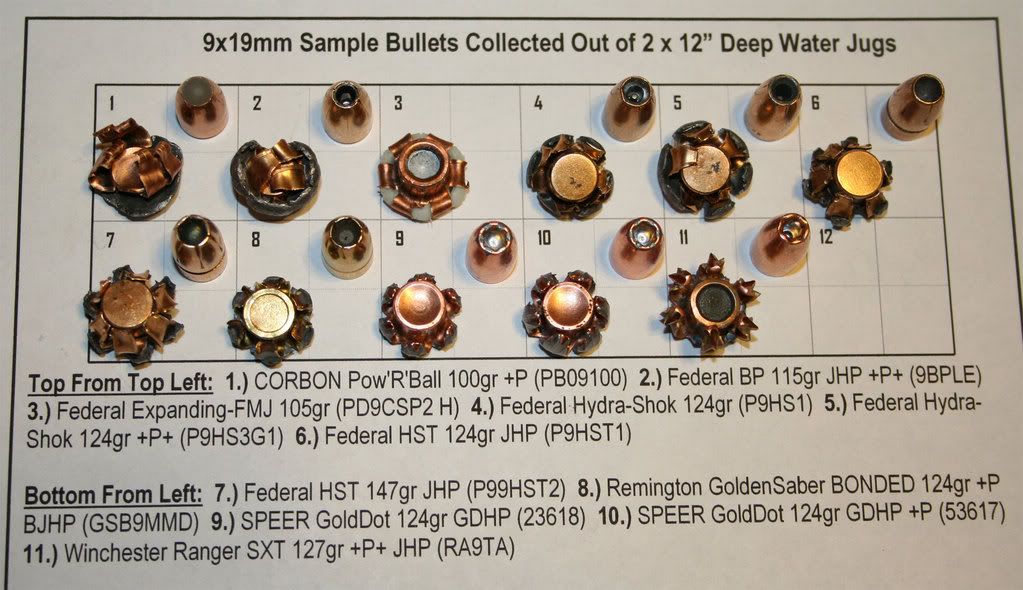 So, with that said-the 115 grain HP's might have a little more range to them...but I don't know if I would necessarily consider them "Deadlier". In my opinion, any round can be just as deadly as the next depending on shot placement.

I'll tell you what I use in my 9 and post a link to a lot of facts you might find interesting below.

I like Black Hills 124 grn. JHP. and so does my Smith. My pistol likes it and it's comfortable to shoot for me as well as me being accurate with it. Some of the others available, either I don't like, or my pistol don't.

BTW, a "grain" became a weight and measure standard way the heck back when in Egypt.
It's a weight equivalent to one grain of wheat.

I like the info that was posted here already.

Hornady is good and it's more affordable.
Corbon, double tap, nosler, black hills is good if your ok spending the cash.

The best ammo to use would be whatever feeds best and is in your gun when you need it. Train with it. Shoot a lot. You'll get more proficient and you'll feel more confident. Take some classes on handgun self defense if you can. A chl is only a start.

With your own guns whatever you like is the best for you. Be safe and responsible and enjoy it.
D

LE often use Winchester Ranger 127gr. +P+ ammo, which is mighty hot.
Texas DPS just switched from SIG .357 to S&W M&P in 9mm. Older officers who qualified with the SIG .357 who wish to retain that handgun and cartridge are free to do so...

I carry Speer Gold-dots not the best but it always ranks high in tests and a huge amount of LE use it as well.