Which stance for the female form?

I took my wife to the range to shoot the present I bought her, a 9 mm Springfield XD. I have always been taught the Weaver stance, and it works very well for me.
I am going over the basics with the wife, including a good stance.
Jack Weaver was obviously a guy, and his stance works well for guys. Is there any school of thought on a stance for the ladies? Is it just a modified Weaver stance, or has anyone any info on something specifically for accommodating the different body shapes?

The XD was a great choice (she picked it), she says it feels comfortable, recoil is not excessive, and she doesn't have to worry about a safety. She fired a .22 when she was a young girl, but hasn't really shot that much at all since. She was getting consistent 3 inch grouping at 10 yd - on her first visit. She said it was the gun, I'm sure its my teaching skills

I'm curious as well, I went with the mod weaver for my wife (who coincidently also picked out a 4" XD9 bi-tone though because it's prettier

) and it works but she doesn't look comfortable. I've benn trying to find something or someone to help but to no avail so far. Hopefully somebody around here can help both of us.

Oh and tell her "good shootin'" for me will ya.
T

What kind of shooting? Defensive or just for target?
J

My wife is interested in target shooting for certain right now, but she is in it for real and will soon be needing to know defensive as well because she fully intends to get her permit and carry. Not sure about Pony's wife.
T

We teach, as do the instructors at schools that I have attended, the combat stance. It is basically the same stance as a boxer would use. Feet about shoulder width apart, strong side leg back in a balanced position, and both arms out in front with the shoulders thrust forward. 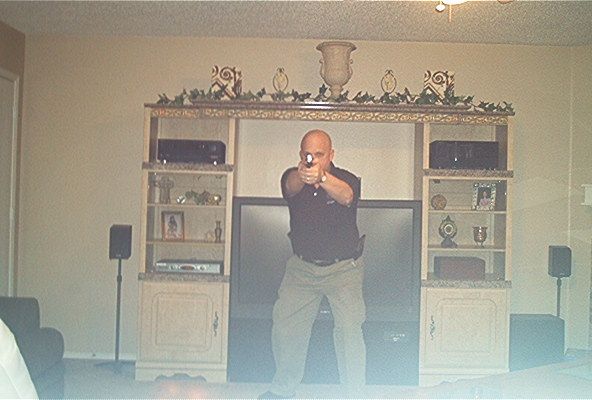 Stance and grip don't matter for making accurate hits. Stance and grip start to matter when doing so at speed, and depending on the situation. When shooting at speed, such as in a self defense situation or some types of competitions (IPSC, IDPA, etc), the thumbs forward grip is superior to Weaver and any of the other typical grip styles out there. The reason is it allows a full 360degree hold on the grip, and because of the position of your arms and hands it allows increased control of muzzle flip and can aid in more consistently bringing the gun back on target. Here's a good article on this grip style:

Like I said though, grip and stance really don't matter. If she squeezes the trigger properly and has a proper front sight focus, the bullets will hit at point of aim every time. I would have her try different grips and see what feels most comfortable. As far as competition and target shooting go, there is a reason the thumbs forward grip is used by pretty much all serious/top level shooters these days.

Here's some excellent videos about the thumbs forward grip (sorry to keep pushing it, it just works so well and I like it


I beg to differ. Especiallay for new shooters, both are inmportant. Without a proper grip, malfunctions are more possible. A proper stance will support you.

It IS true that sight alignment and trigger control are the most important fundamentals, but to ignore stance and grip is not wise.

txinvestigator said:
I beg to differ. Especiallay for new shooters, both are inmportant. Without a proper grip, malfunctions are more possible. A proper stance will support you.

It IS true that sight alignment and trigger control are the most important fundamentals, but to ignore stance and grip is not wise.
Click to expand...

All I'm saying is that for pure accuracy, the ONLY thing that matters is sight picture and trigger control. People get way to caught up in stance, grip, etc having their feet in a very exact position, gripping in just the right manner, pushing/pulling with both hands, finger on the trigger guard, finger not on the trigger guard, thumb over thumb, no thumb over thumb......... People get way too caught up in that stuff thinking it's going to have an effect on accuracy. It can when shooting at speed but, the only thing that affects accuracy is sight alignment and trigger control. Especially with people new to firearms, I think those 2 basic fundamentals really need to be stressed over things like grip, stance, etc.

People think that if you He-Man death grip a gun that accuracy will suffer horribly. Some people even think that if you don't have your feet exactly shoulder width apart, one foot very slightly in front of the other, that accuracy will suffer. Some people think you need to apply very specific differing force with each hand on the grip (60/40 for example). None of that really matters. Just get a good solid hold on the gun, focus on the front sight properly, and properly manipulate the trigger and that's all that matters for most people's purposes. It helped me immensely watching James Yeager's Shooting Missology dvd. I mean I've paid attention to focusing on the front sight in the past and I've paid attention and done drills to focus on proper trigger control. Though I was simply "trying" waaaaaaay to hard and focusing entirely too much on grip while still not 100% pulling the trigger properly, not quite focusing on the front sight how I should have, etc. If this makes any sense, after watching that video and seeing things put into perspective, I'm shooting significantly better and it is significantly easier doing so since I already have a relatively solid grip and I'm only focusing on 2 things as opposed to maybe 10.

BTW, I usually take a strong "combat" stance like you pictured as well.

Thanks for the input. Primarily it is for defense, however I am hoping she gains an interest in target, or IPSC, or IDPA . I have shot both IPSC and IDPA (usually the same 'course' in both styles) at an amateur level in the past and hope to take it up again once I get back to Texas (I start the drive out on Friday!!! BTW). I'll have 4 cats and a dog in the pickup with me - hmmmm, I'll need a stiff one when I reach Texas. The wife follows in 10 days with the last of our dogs.

My wife was shooting in her own variation of the combat stance you posted. I didn't want to make her uncomfortable by making her stand in what I had been told was the 'correct' stance, so we ended up with a modified Weaver.

One question about the combat stance you posted (and thanks for the post), doesn't that potentially present a larger target?

(juwaba98, my wife's ego is big enough without telling her good shootin'