Does Your Sheriffs Have One Of These?

DOES YOUR SHERIFFS HAVE ONE OF THESE? 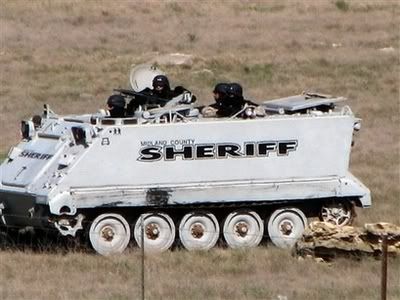 Haha, that's pretty cool. I want a M113. I've seen a few different county Sheriff's departments that have them or something similar. I don't see anything wrong with that. Some people get bent out of shape about the whole "militarization" of the police (kind of a misnomer IMO). Personally I look at it like this. They are there to do a job that could likely become dangerous and bullets could start flying. Because of that possibility they wear body armor and carry weapons like M4's and Mp5's so that they will have sufficient ability to return fire if they come under fire. I mean they are putting themselves in harm's way, so why shouldn't they do everything possible to protect themselves? Some people act like SWAT teams should be issued pink tu tu's, stacking up on the compound armed only with .38 cal revolvers, politely announcing their presence so as to not scare anyone inside.

In this situation, judging by some of the aerial photos I've seen the compound appears to be 3 stories tall and quite large. On top of that it looks like there is a pretty large amount of open ground to cover up to the compound. Because of that, in a worst case scenario, anyone held up in the compound could have the advantage of high ground and a lack of cover up to the compound so things could go south very quickly. So what do can the SWAT team do? They use an armored vehicle to transport them more safely up to the compound. People see tactical gear, "assault rifles", and armored vehicles and they sometimes get all bent out of shape thinking the police are somehow "declaring war" on civilians. That's just preposterous. Now the day when the police are rolling armored vehicles up and calling in air support and arty strikes (I'm joking obviously) on a house they are doing a no knock warrant search for because the owner forgot to pay a parking ticket, then that is the day they will have gone too far.

It's just a safety tool. It'd be different if it was an M1A2 Abrams.
L

It's all rainbows and cute little bunnies until someone gets hurt.
I

And here I was about to respond OT style with "no M2, no care."
D

I live in Midland County, I love that thing. Ive never seen it used but what the hell...ya never know.
B

I used to live in Midland Couny; three of our kids were born there. One of them lives there again now with his family. Never realized they had any armour.

We don't have one. However, I did request one as a patrol car.
M

I think they were expecting another Waco.Kind of weird that Midland has one for such a small county.They have no armored vehicles in my town which is having a drug war across the river in Juarez.
T

Slotback said:
We don't have one. However, I did request one as a patrol car.
Click to expand...